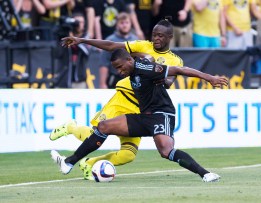 COLUMBUS, Ohio — There were fireworks in the field and in the sky on Wednesday evening, but not enough to declare a winner between the Columbus Crew and New York City FC.

The Crew and NYCFC played to a 2-2 draw complete with beautiful combination goals as well as a 74 minute delay due to severe weather in the area.

Crew forward Kei Kamara scored his league-leading 18th goal of the season while NYCFC midfielder Kwadwo Poku scored a second-half brace. Speedy winger and summer arrival Cedrick Mabwati scored the game-tying goal for the Crew midway through the second half.

“It was an odd game,” Crew head coach Gregg Berhalter said following the match. “(NYCFC) stayed very narrow in their defending and we just didn’t get (the ball) wide quick enough. We needed to get the ball wide quickly, switch the field, and get the ball in the box. That’s how we scored our goal. I don’t think that was effective enough.”

As has happened on so many occasions this season, the partnership between winger Ethan Finlay and Kamara paid dividends.

In the 24th minute, Crew midfielder Wil Trapp recovered a ball and played in Finlay down the right wing, and after dribbling towards the touchline, Finlay fooled NYCFC centerback Jason Hernandez with a changeup pass into the middle.

Kamara found himself in a great position in the box and re-directed the pass off NYCFC goalkeeper Josh Saunders and in for the game’s opening goal.

“I was just talking the other day with (Crew assistant coach Josh) Wolff about whether you’re going to rip one across goal or have a shot….we said to go low with it, it will go off someone, maybe them, maybe us. It will make havoc in there,” Finlay said.

“So I did (that) and Kei is able to read that so well and that’s something that’s special about him.”

In the second half, NYCFC’s cult hero Poku became more involved in the attack, leading to a pair of goals for his team.

Poku received a pass at midfield in the 57th minute and used a nifty touch to re-direct the ball to NYCFC Designated Player David Villa. Villa controlled the ball and turned towards goal before playing a pass into the box back to Poku, who one-touched a shot past Crew goalkeeper Steve Clark to tie the match.

Nine minutes later, NYCFC stunned the home crowd of 15,514 as they took the lead. NYCFC Designated Player Andrea Pirlo delivered a corner kick to the far post where it met the head of midfielder Andrew Jacobson. Jacobson then headed the ball pack in the direction of Poku at the top of the box, and Poku fired a first-time strike past Clark to make the score 2-1.

“Obviously you’re not pleased to concede goals like that. I think it was a number of errors that led to their first goal, in positioning and execution,” Berhalter said, while also giving credit to Villa and Poku for their combination play. “Second goal, we go over this stuff, and there’s a spot at the top of the box we’re supposed to be defending and it was guys not expecting the worst. When you’re in that position you expect the worst to happen.

“The ball fell right in to spot and we should have been in position.”

It wasn’t long before the Crew hit back to tie up the game, though. Shortly after the goal, Berhalter brought on Mabwati for Justin Meram, and Mabwati only needed five minutes to make his mark on the game.

In the 72nd minute, Mabwati combined beautifully on the edge of the box with Kamara, playing a one-two before Mabwati finished past Saunders and wheeled away to celebrate with the fans.

“We have been seeing glimpses of that in training these past couple of weeks. We know that he’s pushing,” Berhalter said. “He got the goal on a fantastic effort. More importantly, I think when you look at that overtime stretch, he was aggressive, going at guys, and that’s the ability that he has.”

In the 77th minute, referee Allen Chapman called the players off the field due to severe weather in the area, and minutes later, a strong thunderstorm rolled into Columbus, drenching the area with rain and multiple lightning strikes.

Following a 74-minute delay due to a severe thunderstorm that passed through, both teams returned to the field to play out the final 13 minutes and change. Due to the long time spent in the locker room and a short warmup, neither side found their rhythm and the 2-2 scoreline remained.

The final three spots in Concacaf’s eight-team final round of World Cup qualifying will be filled on Tuesday night, with two of the three clashes for those spots still very much up for grabs. Canada carries a (…)

A free kick golazo from one of the world’s top talents, a superb equalizing strike from a former MLS player, and two come-from-behind results. It sure was an eventful first day of Group A play at Copa (…)

The soccer-filled summer may still be in its initial stages, but we might just have seen the best goal of the season all the same. Czech Republic forward Patrik Schick scored an incredible goal at the 2020 (…)

France - Germany headlines This Week's Soccer on TV and Online

In his last competitive cycle in charge of one of the world’s great international programs, 61-year-old manager Joachim Low will be looking to leave the German National Team freshly stamped with (…)

Fighting for her spot to break into the U.S. Women’s National Team Olympic 18, Margaret “Midge” Purce had the exact type of game she needed to have in the team’s 4-0 win over Jamaica. Purce earned her (…)

A closer look at the USMNT win vs. Costa Rica: Aaronson's ascendancy, managing Musah, and more

There was an anti-climactic feel leading up to last Wednesday’s U.S. Men’s National Team friendly against Costa Rica, at least before the match kicked off. Just three days removed from the dramatic Concacaf (…)

The U.S. Women’s National Team looked much more like a World Cup champion in the second of three games in its pre-Olympic tournament on Sunday night. The Americans found plenty of ways to score to make it a (…)

The Netherlands secured a massive result in Group C with a late goal to defeat Ukraine. In a crucial Goup D match, Raheem Sterling pushed England past Croatia. North Macedonia scored its first ever European (…)

After so much uncertainty, Copa America 2021 finally got underway on Sunday with a pair of games that came under vastly different circumstances. Group B opened the latest edition of South America’s (…)

CONCACAF World Cup Qualifying resumed on Saturday night, with six teams vying for the final three places in the final octagonal round on the road to the 2022 World Cup. Canada was one of the nations in (…)

Euro 2020 Preview: A closer look at the teams, top players and matches to watch

Euro 2020 headlines This Weekend's Soccer on TV and Online