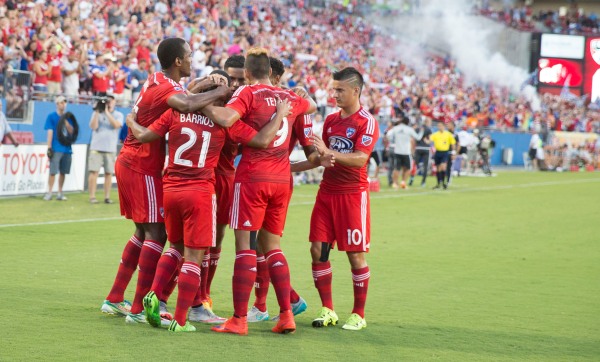 FC Dallas’ may have endured a nightmare start in July, but that still did not stop the club from enjoying a superb month that pushed it towards the top of the table in the Western Conference.

Four wins, two shutouts, and 13 goals were among the accomplishments that highlighted FC Dallas’ strong July showing. Dallas got off on the wrong foot by getting routed by Sporting Kansas City, 6-2, in U.S. Open Cup play on the first of the month, but quickly put that in the rearview mirror and responded with four straight MLS victories.

The undefeated stretch in league play included wins over the New England Revolution, Orlando City, D.C. United, and Portland Timbers, and earned FC Dallas the SBI MLS Team of the Month award for July. Dallas beat out fellow Western Conference sides the Vancouver Whitecaps and Colorado Rapids for the honors.

Oscar Pareja’s men, which are off to a losing start in August, currently sit one point behind Vancouver in the Western Conference standings with a game in hand.

What do you think about FC Dallas winning this award? How impressed were you by the club’s July showing? Find it even more remarkable given how it started with that lopsided Open Cup loss?