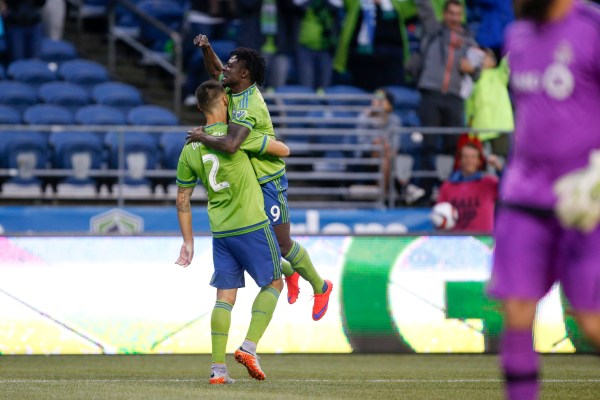 But like an old married couple quickly falling into old rhythms, it took them but minutes to link up in front of 39,960 at CenturyLink Field on Saturday night, each eventually scoring to lift the Sounders to a 2-1 victory over woefully undermanned Toronto FC.

With the match tied 1-1 in the 77th minute, Martins blazed into open space on the counter, scooted past defender Eriq Zavaleta at the edge of the penalty area, and charged goalkeeper Chris Konopka, who failed to corral the ball after taking it off Martins’ feet. Trailing the play, Dempsey chipped into an empty net from 13 yards out for the game-winning goal.

The duo combined to open the scoring in just the sixth minute in a bit of what Dempsey has repeatedly described as their playground or pick-up game style of play.

Working on the counter against a 3-4-3 that often played like a flat five-man back line, Dempsey sent a ball over the top just as Martins split defenders Josh Williams and Clement Simonin. Alone behind the defense, Martins stepped under the pass and easily beat a helpless Konopka from close range.

With a team-leading 11 goals in a mere 15 appearances, Martins has also scored four goals in just three games since returning from a groin injury that sidelined him for two months.

“At the end of the day,” Schmetzer said after the match, “it’s just Oba and Deuce doing what they do.”

The Sounders (13-13-2, 41 points) have now won three of their last four matches after slumping while shorthanded for much of the summer.

“Was the game the prettiest game? No,” said Schmetzer. “But the fact of the matter is what wins championships is grit and determination and a little bit of good defending and timely goals.”

The win also leapfrogs Seattle past the Portland Timbers and Sporting KC into a tie with FC Dallas — which plays the Columbus Crew on Sunday — for third place in the Western Conference. The Sounders have, however, played more matches than every team in the West besides the LA Galaxy.

Missing Designated Players Sebastian Giovinco and Jozy Altidore and a host of other regular contributors, it briefly seemed Toronto might find itself run out of the park after falling behind. But the visitors settled in and created opportunities for themselves, eventually equalizing in the second half.

In the 59th minute, Zavaleta — once a Seattle first-round draft pick — found himself unmarked at the top of the 6-yard box and cleanly headed home a hard-driven cross from defender Ashtone Morgan to tie the game.

But Seattle responded with a flurry of attacks that eventually led to Dempsey’s go-ahead goal, and Toronto never seriously threatened to reply.

Toronto (11-11-4, 37 points) was missing Giovinco and his 17 goals and 13 assists to injury, while Altidore is with the U.S. national team. Collen Warner was suspended. Benoit Cheyrou, Jackson, Damien Perquis, Nick Hagglund, and Daniel Lovitz were also injured; after initially flying to Seattle, Justin Morrow returned to Toronto to be with his pregnant wife.

A lineup beyond makeshift couldn’t build off the club’s first back-to-back wins since the first week of June, but Toronto nearly left with a most unlikely road draw against a talent-laden host desperate for wins.

“I’m proud of the effort,” said Toronto head coach Greg Vanney. “I thought the guys played great and laid it all out there on the field. I thought we deserved something out of the match, but ultimately, these games come down to a play here or a play there. And that’s what it was in the end.”

Paired with the New England Revolution’s win earlier Saturday, the loss drops Toronto into fifth place in the Eastern Conference standings as they attempt to make the playoffs for the first time in club history.

Looking forward, both teams are back in action next weekend. The Sounders visit the San Jose Earthquakes (11-11-5, 38 points), while Toronto hosts the New England Revolution (11-9-7, 40 points).