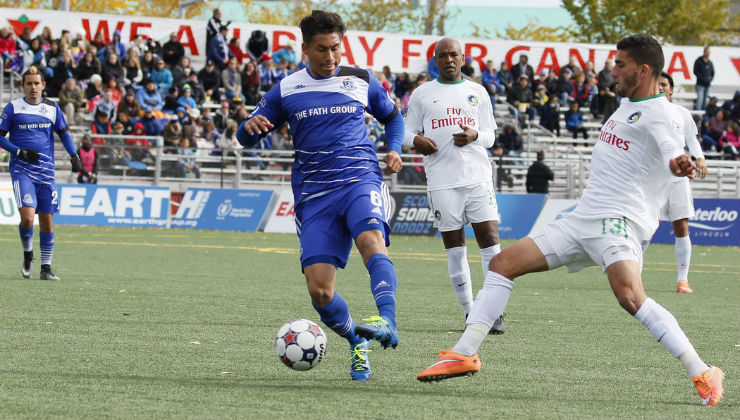 With the NASL playoffs quickly approaching, FC Edmonton posted a vital win at home over the New York Cosmos to jump into fourth place in the combined standings on Sunday.

Elsewhere, it was a case of the rich getting richer and disappointment for playoff contenders this weekend in NASL.

The Ottawa Fury earned an important away victory over the Carolina RailHawks, extending their winning streak to three matches.

Minnesota United put up five goals in Fort Lauderdale. While a win at home for the Strikers would have put them in the final playoff spot, the side failed to compete with the league’s hottest team.

In Jacksonville, the Armada managed a victory over Florida rivals the Tampa Bay Rowdies in a match that saw Freddy Adu’s league debut.

Here’s a closer look at the results from around the league this weekend:

The Ottawa Fury posted a 3-1 win away to the Carolina RailHawks on Saturday. The victory sees the Canadian team keep a firm hold on the top spot this Fall Season.

Tom Heinemann scored the first of two goals in the 19th minute to get the scoring started.

Heinemann received a deep pass from Richie Ryan with his back to goal, turned, muscled off two defenders and struck a low shot underneath the hands of Carolina’s goalkeeper.

Heinemann was back at it in the 33rd minute. A pass from Sinisa Ubiparipovic deflected off a RailHawks midfielder and into the path of the onrushing Heinemann, who took a single touch before firing in a goal from distance.

Paulo Junior added an impressive 45th-minute strike, weaving down the left flank before beating two defenders with skill in the area and curling in a goal from the top of the box.

RailHawks standout Nacho Novo scored a 51st-minute penalty for consolation after being pulled down by Fury centerback Colin Falvey.

A home win could have seen the Fort Lauderdale Strikers leap into the final playoff spot, but Minnesota United proved too much to handle in a 5-2 win in southern Florida.

The Strikers got on the board first, through Jose Angulo in the seventh minute. Marlon Freitas took the ball to the top of the box and dished it right out to Gabriel, who played a low cross for Angulo to tap in past the United goalkeeper.

United struck back quickly, leveling the score in just the 12th minute through Christian Ramirez. Greg Jordan saw his shot deflected at the top of the box, and the ball fell to Daniel Mendes near the penalty spot. Mendes calmly played the ball to Ramirez, who slotted home with ease.

Kalif Alhassan put the visitors up in the 27th minute, scoring a fantastic solo effort from outside the box that curled into the upper-right corner.

In the 44th minute, Mendes slid the ball past the keeper with his first touch off of an Ibson assist from deep.

Ibson earned himself a 26-minute brace in the second half. The midfielder was the beneficiary of quick play and a skillful assist from Ramirez, as he tapped home the first. The next goal came in the 87th minute, when Ibson chipped the keeper after a square ball from J.C. Banks at the top of the box.

Angulo scored a stunning goal in the 88th minute, curling in a near post shot from 20 yards out.

After a recent resurgence in form, the Tampa Bay Rowdies failed to earn an easy result against a Jacksonville Armada side that hadn’t scored a goal in 533 minutes. The Armada treated over 7,000 fans to a 2-0 win at home on Saturday night.

Lucas Scaglia put his side up in the 34th minute. From a short corner, Pascal Millien skillfully took the ball inside the box before dishing it to Scaglia at the top of the box, who fired a first-time shot to the far post.

Millien then turned from assist-man to goalscorer, doubling the Armada’s lead in the 74th minute. The winger received the ball in midfield and dribbled at his defender, beating him with skill to find the space to fire a driven shot to the far post.

It was a 3-3 draw in San Antonio that saw the Scorpions score two late goals at home to deny the Atlanta Silverbacks from an important road win.

Rauwshan McKenzie doubled his sides’ lead in the 23rd minute. Junior Burgos put in a dangerous free kick from deep, and McKenzie nodded the ball in from near the penalty spot.

Nana Attakora got the Scorpions back in the match with his 41st-minute strike, resulting from a corner kick.

Chavez scored his second of the night in the 58th minute to regain a two-goal lead for the Silverbacks. Burgos was once again the assist-man, playing Chavez into the center of the box for a calm finish.

The Scorpions then managed to score two goals in the final ten minutes of the match, but both were shrouded in controversy. Marvin Chavez got things started in the 80th minute, firing home from outside the 18-yard box. An assistant originally called Chavez offsides, but the center referee spoke with his team and decided to allow the goal.

Cesar Elizondo then scored the equalizer in the 90th. Elizondo’s curled strike rebounded off of both posts before seemingly being saved by the Silverbacks goalkeeper. The referee called it a goal, though, and the Scorpions completed a dramatic two-goal comeback.

FC Edmonton knew exactly what it needed to do get into a playoff position this weekend. And the Eddies got it done, beating the New York Cosmos at home 2-1.

Edmonton took advantage of losses from the Fort Lauderdale Strikers and the Tampa Bay Rowdies to leapfrog both teams and put themselves into the fourth and final postseason spot.

The Eddies scored twice in three minutes at the end of the first half, with the hot attacking duo of Lance Laing and Daryl Fordyce putting the side in front with a goal apiece. Marcos Senna cut the home side’s lead in half just before the hour mark, but the Cosmos ultimately failed to get a result one the road.

Laing got things started in the 41st minute, picking up the ball in midfield before beating his defender with skill and firing a low shot past the Cosmos goalkeeper.

Just moments later in the 43rd minute, Edmonton midfielder Dustin Corea found Fordyce on a breakaway, and the red-hot striker found the back of the net for the 2-0 lead.

In the 58th minute, Senna scored a penalty that resulted from an Albert Watson hand ball in the box.