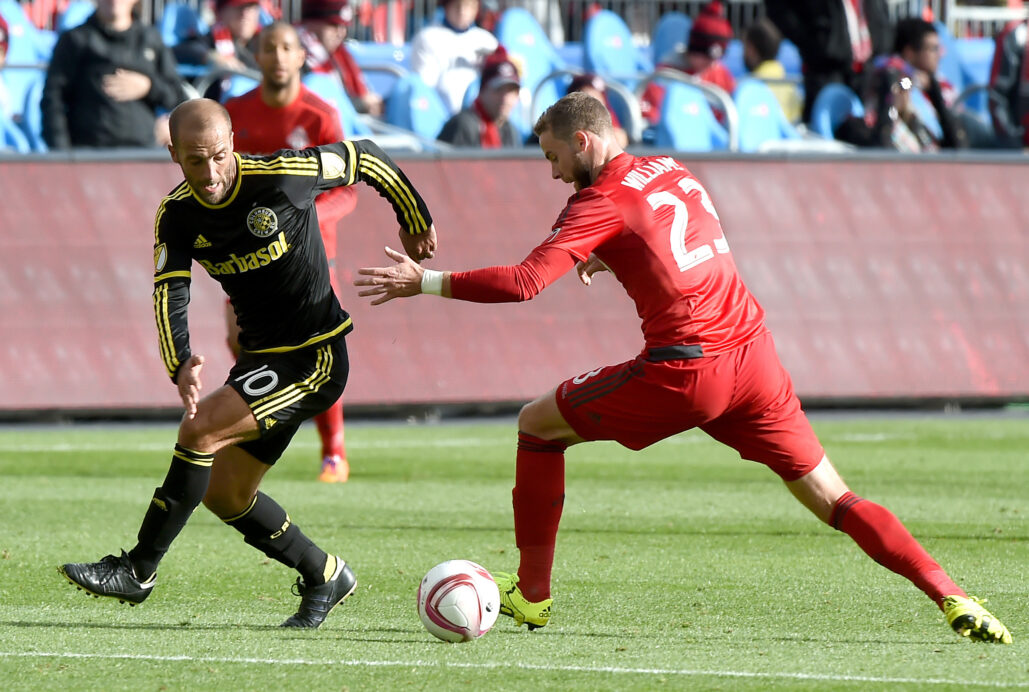 The Columbus Crew needed at least a tie to claim a spot in the 2015 MLS Cup Playoffs, but they did even better at BMO Field Saturday.

Toronto FC may have just earned an important win against the New York Red Bulls Wednesday, but the Crew took it to the Reds on the road, posting a 2-0 win against their conference foe.

Steve Clark earned his fifth shutout for the Crew this season, but the day belonged to Federico Higuaín, who claimed his ninth assist and eighth goal of the year to lead Columbus to victory.

Ethan Finlay opened the scoring for the visiting Crew, and Higuaín would tally in second-half stoppage time to seal the win.

The Crew move into second place in the Eastern Conference with 50 points, one above Toronto FC and four behind the New York Red Bulls.

Finlay tallied the first of the day in the 40th minute. A Higuaín corner kick found its way to the far post, and the 25-year-old midfielder tucked his effort into the back of the net for his 10th goal of the 2015 MLS season.

The Crew dominated possession for long stretches of the game, and the home side didn’t register a shot on frame until the 63rd minute. Sebastian Giovinco almost curled a free kick past Clark, but the Crew netminder forced the Italian’s effort wide.

After Jackson sent in a cross from the right wing, Luke Moore was able to put a header on target in the 70th minute, but like many of the team’s chances Saturday, it didn’t create cause for much concern.

In the 76th minute, Higuaín came close to scoring, but his blast from just outside the penalty box was pushed up and over the crossbar by goalkeeper Joe Bendik.

Higuaín would eventually tally for the Crew, though, scoring a dazzling goal in the 91st minute to seal the result. The Argentine shrugged off a defender while making a run into the penalty area from the left wing. He then deftly chipped Bendik for the game’s second goal.

Toronto FC will end its 2015 season against the Montreal Impact next Sunday, while the Crew hosts D.C. United the same day.