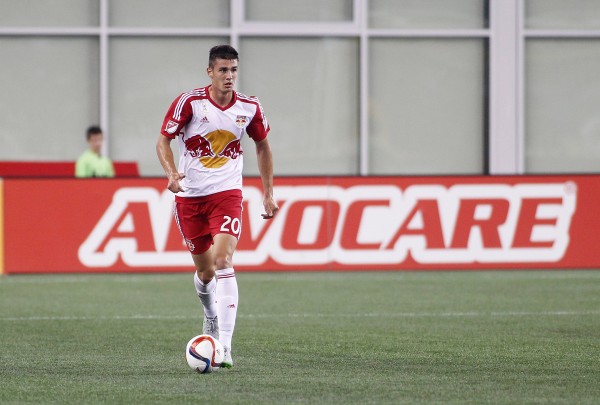 Matt Miazga may have missed the New York Red Bulls’ last four games, but that still is unlikely to stop head coach Jesse Marsch from using the young centerback as a starter in Sunday’s all-important season finale.

The Red Bulls will have an opportunity to claim the Supporters’ Shield this weekend when they visit the Chicago Fire, and Miazga figures to return to New York’s lineup despite missing the past month because of a combination of suspension and international duty.

Miazga, 20, was facing a two-game ban after getting ejected in the Red Bulls’ 5-2 loss to Orlando City on Sept. 25, but had to wait until coming back from playing for the U.S. Under-23 Men’s National Team to serve that suspension. He rejoined his New York teammates last week, and sat out a loss vs. Toronto FC and win over the Philadelphia Union to once again be made available for selection.

Ronald Zubar has partnered with Damien Perrinelle in central defense in Miazga’s absence and done a decent job to help the club go 3-1 during this recent stretch. Still, head coach Jesse Marsch is likely to swap out one of the veterans, likely Zubar, for Miazga.

“We’ve started the discussion, but the decision hasn’t been made yet,” Marsch told SBI. “I would say that it’s likely that Matt will be part of our starting lineup.”

New York enters the final weekend of the regular season with its sights set on the Supporters’ Shield. The club is currently tied on points with Western Conference leader FC Dallas, but holds a better goal differential and knows that a victory vs. the lowly Fire will all but guarantee the second piece of significant hard in the Red Bulls’ history.

Starting Miazga might seem like a no-brainer to most given his level of play this year, but some coaches might be wary of messing with a back line’s rhythm with so much at stake. Marsch does not, however, seem overly concerned by that because he has extreme confidence in Miazga’s abilities.

“Certainly, Matt’s had a very good season and it’s good to have him back,” said Marsch. “The likelihood is that he’ll be stepping back on the field and helping us find a way to get a result. I think Matt’s grown so much this year, and it’s been a challenging year because he’s gone in and out with different teams and different systems and different coaches.

“But I think he’s continued to show focus and maturity in the way he approaches every day. Since he’s been back in training he’s been very sharp, so we’re excited to have him back.”

What do you think of Marsch likely turning back to Miazga vs. the Fire? Should Zubar or Perrinelle come out of the lineup? Worried that inserting Miazga could mess up the back line’s rhythm given his recent absence?