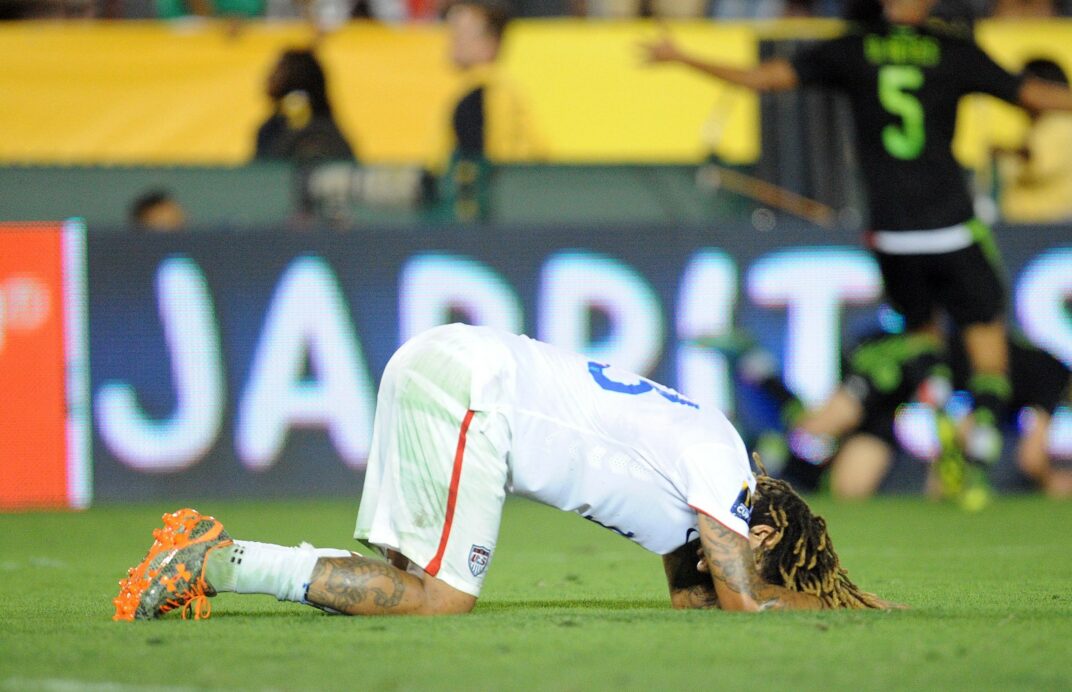 The U.S. suffered a demoralizing and painful 3-2 loss to Mexico in extra time of the CONCACAF Cup on Saturday, with a golazo from Paul Aguilar in the 118th minute proving to be the difference at the Rose Bowl in Pasadena, California.

The Americans’ may have lost by just a goal, but their performance in the instant classic that was the match left a lot to be desired. Mexico was far better from the run of play, bossing possession, creating chances, and pinning the U.S. deep in its own half.

For Jurgen Klinsmann and his players, the bitter, frustrating, and disappointing loss was just the latest setback in a 2015 year that has been miles from perfect. Not only was it a setback for the U.S., but it left and raised plenty of questions as to how this team plans to tackle World Cup qualifying in the months to come.

Here are some takeaways from the U.S.’s 3-2 CONCACAF CUP defeat to Mexico:

PERFORMANCE WAS AS REACTIVE – NOT PROACTIVE – AS EVER

When Jurgen Klinsmann signed on as U.S. head coach four years ago, there was plenty of talk about making the Americans proactive and not reactive. The idea was to have the U.S. become a side that could dictate the tempo and impose its will on, maybe not powerhouse, but ones that it is better than or about equal to.

Well, what we saw on Saturday night was not proactive soccer. In fact, it was as reactive as ever.

The U.S., overwhelmed with Mexico’s deployment of three forwards, defended deep for much of the 120 minutes. The Americans were very organized and mostly disciplined, but once again struggled with possession and lacked ideas in the attacking half. Movement was abysmal, passing was predictable, and the long-struggling attack floundered. The end result was just.

All this would be at least more acceptable – it’s been the U.S. way for years, after all – if one of Klinsmann’s stated objectives was not to make his team less reactionary and if the head coach was not getting paid a hefty sum by U.S. Soccer to push the Americans to a different level than his predecessors.

Some will say that the U.S. simply does not have the attacking-minded players to be more possession oriented, but that’s not true. Benny Feilhaber, Lee Nguyen, and Sacha Kljestan are creative players who are doing fairly well in MLS, but they continue to be ignored in favor of players more known for their defensive skills and work rates.

It was always said that it would take time for the change to happen, but the U.S. is now entering Year 5 in the Klinsmann era and showing little signs of progress in becoming more proactive. That might not matter much in World Cup qualifying because the reality is that CONCACAF’s campaign is as forgiving as any around the world, but in higher-level games that matter – where the pressure is cranked up and something is truly at stake – the U.S. is no different than it was years ago.

That’s concerning given how much has been invested in and entrusted to Klinsmann.

There were plenty of negatives for the U.S. to dissect and dwell on, but one huge positive was the play of Geoff Cameron.

Despite playing on a back line that gave up three goals, Cameron impressed in a big way at centerback against Mexico. The goal he scored on a set piece in the 15th minute was well-taken, but what really stood out was the way he held his ground against wave after wave of El Tri attacks. Cameron also did a good job of organizing, which helped keep the Americans’ defense compact and sturdy for prolonged periods against a Mexico side that hogged the ball.

Cameron looked a natural back there even though he had not played much for the U.S. since the 2014 World Cup. He complemented fellow centerback Matt Besler well, avoided the type of blunders that have plagued the U.S. in recent months, and was key in the Americans’ ability to deliver the strongest defensive performance in recent memory.

It surely helps that Cameron is regularly seeing time in central defense at Stoke City, but he should remain a starter for Klinsmann even if that changes. Cameron not only has the physical tools to be a solid centerback, but can also pass and is still at a reliable age at 30-years old.

BECKERMAN’S TIME WITH USMNT IS DONE, BEASLEY’S MIGHT BE TOO

Klinsmann talked in the lead-up to the game about how the CONCACAF Cup could be the final time some of the players that are over 30 represent the U.S., and it certainly looks as if that is the case for Kyle Beckerman.

The U.S. lost the possession battle by a wide margin against Mexico, and part, though certainly not all, of that falls on the shoulders of Beckerman. The veteran midfielder was unable to break up plays to help jumpstart attacks on a consistent basis for the Americans in the No. 6 role. Beckerman looked a step slow, just like he did at the most recent CONCACAF Gold Cup, and resorted to fouling quite a bit to halt the Mexicans.

Beckerman, 33, was a key to and very overlooked part of the U.S.’s success last cycle and in the World Cup. Now, however, with Danny Williams, Alfredo Morales, and other young options like Perry Kitchen available, Beckerman’s international career is over. In fact, let’s not forget that Klinsmann seemed ready to move away from Beckerman in the fall 2014 when he stopped calling up the Real Salt Lake star in favor of younger players.

DaMarcus Beasley, who is also 33-years old, may also have a similar fate. Beasley remains one of the top two fullbacks in the pool – even after his game-costing hiccup on Saturday – but Klinsmann has on more than one occasion sounded ready to part ways with the long-time U.S. mainstay.

Remember, Beasley retired from international duty last year before coming back for the Gold Cup due to Klinsmann’s lack of prepared options. Then, after Beasley’s poor showing in the third-place loss to Panama, Klinsmann sounded unsure if Beasley would play again internationally while the player himself said he was not retiring from the U.S. again just yet.

The players behind Beasley on the depth chart may not be as ready to step into the starting lineup as the defensive midfielders that could replace Beckerman, but Klinsmann has options. There’s Greg Garza, Brek Shea, and Timmy Chandler, and the U.S. head coach might be inclined to start relying heavily on them at the expense of Beasley.

As for the 33-year-old Jermaine Jones and 32-year-old Clint Dempsey, their places in the team same safe for now. The two are still capable of being difference-makers at the international level, but their automatic places in the lineup do not seem as secure as they did earlier this year.

Along those lines of going with youth, it is time that Bobby Wood gets some starts. Not only did he impress once again as a super sub by scoring via a cool finish in extra time, but he has also been in good form at the club level with 2. Bundesliga outfit FC Union Berlin.

Wood is looking a much more confident player these days than he did last fall when he was getting his feet wet with the senior national team and rarely seeing the field at the club level. He’s scoring goals for club and country, and demonstrating good movement and a willingness to take an array of shots.

Inserting him into the lineup will prove difficult as it likely means the removal of one of Dempsey or Jozy Altidore, but that is something Klinsmann will have to figure out. The Americans’ attack is in sore need of another goal-scoring threat and a different, less predictable look, and Wood continues to look plenty capable of providing that.

Starting would of course provide a new set of challenges for Wood, but he needs to learn how to overcome them and the only way to do that is by being included in the lineup. There will surely be rough patches and inconsistent performances, but his development will benefit from those experiences and so would Klinsmann and the U.S.