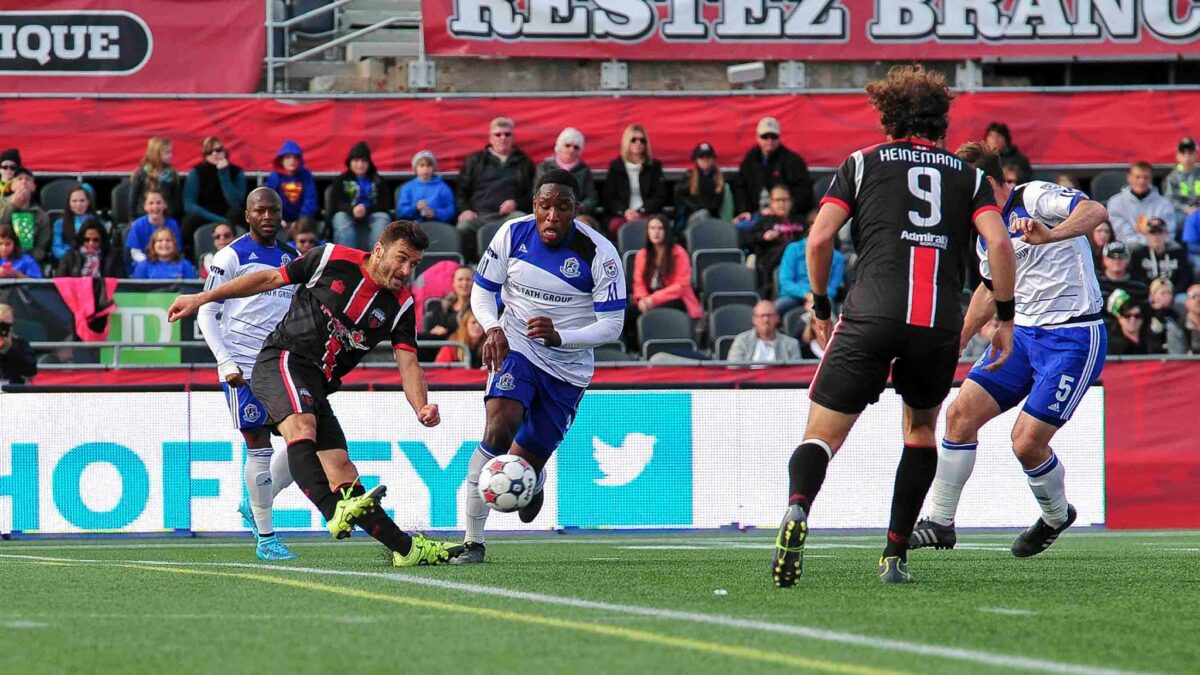 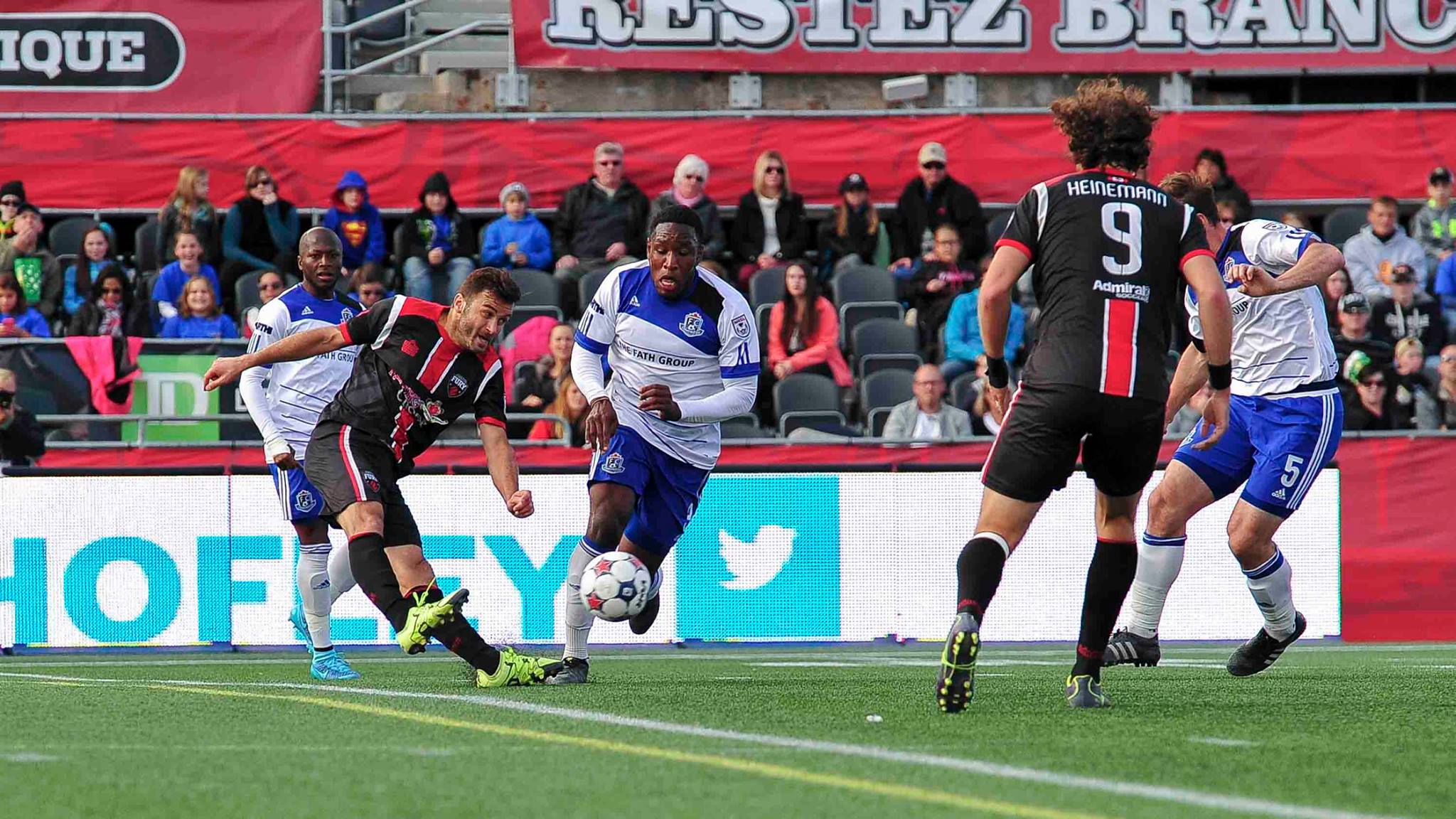 The Ottawa Fury dominated the Canadian derby, and MLS-elect side Minnesota United continued their forward march towards the Soccer Bowl this weekend in NASL.

United and the Fury both recorded wins to keep hold of the top two spots in the combined NASL standings, while there was a bit of reshuffling for the final playoff spot.

Four of this weekend’s matches led to easily foreseeable results, with the only surprise being the New York Cosmos drawing at home against the Atlanta Silverbacks.

Minnesota United continued its hot streak with a win over a Tampa Bay Rowdies, who continues to fight for the postseason.

Elsewhere, the Fort Lauderdale Strikers got their attack firing on all cylinders again during a win away to the San Antonio Scorpions.

INDY DRAW ON ROAD IN JACKSONVILLE

NASL action kicked off on Saturday night with a drab match between two of the league’s lowest-ranked teams. Indy Eleven managed a late goal, thanks to a man advantage, to draw the Jacksonville Armada 1-1 on the road.

Jaime Castrillon got things started in the 29th minute. The Armada midfielder passed the ball off to Pascal Millien before going down near the center of the pitch, but he then rose to the occasion and made a deep run into the box to meet Millien’s cross with a headed goal.

The Armada then went down to 10 men after a 63rd-minute red card to Mechack Jerome. The centerback dangerously kicked out at Wojciech Wojcik while he was on the ground.

The Eleven used their man advantage to salvage a point on the road in the 83rd minute. Wojcik flicked a lofty ball into the center of the box for Brian Brown to finish one-time into the right side of the net.

A late winner from Akeil Barrett was waived off by the referee for a handball.

Minnesota United bagged its seventh win in nine matches on Saturday, recording a 1-0 home victory over the Tampa Bay Rowdies.

In the 41st minute, Rowdies defender Ben Sweat drew a second yellow card and was ejected from the match, leaving his side a man down. Sweat pulled down substitute Alejandro Vela right in front of the referee.

Just three minutes later, United scored the game-winner through Christian Ramirez. Daniel Mendes ran onto a ball lofted to the right corner of the field, and he delivered a cross in the air for Ramirez to tap home at the far post. The goal was the 11th for Ramirez in 2015.

The win puts United in second place both in the fall and combined NASL standings.

The Rowdies, meanwhile, fall from fourth to sixth place in the combined standings. Stuart Campbell’s side is level on points with the two teams ahead of them, though, as the battle for the final playoff spot heats up.

The highest-scoring match of the weekend saw the Fort Lauderdale Strikers find their spectacular fluidity in attack once again. The Strikers took all the points as they won 4-2 at the home of the San Antonio Scorpions.

It was a Stefano Pinho hat trick that lead the way for the Strikers, and the Brazilian put his side up 1-0 in just the 10th minute. Pinho found his way around a pair of Scorpions defenders before firing in the first goal.

In the 15th minute, the Brazilian connection was in full effect as Marlon Freitas fired home from a PC assist to double his team’s lead. Pinho was back on the scoresheet in the 40th minute, burying a hard, left-footed shot from another PC assist from deep midfield.

The Scorpions then mounted a possible comeback, scoring twice to make the scoreline 3-2. Kris Tyrpak scored in the 56th minute, and Stephen DeRoux put one away in the 79th minute.

Pinho wasn’t done yet, though, as the Brazilian tapped in a pass in the 86th minute from substitute Shawn Chin to complete his second hat trick of the year.

With the result, the Strikers shot up the table to fourth place, occupying the final playoff spot with a game in hand on teams below them.

The Ottawa Fury recorded a 2-0 win at home over FC Edmonton on Saturday to maintain their status as the top seeded team for the postseason. A Sinisa Ubiparipovic brace proved the difference between the Canadian sides.

Things got started with a talented outside-of-the-foot pass from Tom Heinemann to send Paulo Junior down the left flank in the 23rd minute. Junior outran his mark and slotted a low cross in to find Ubiparipovic at the far post.

Ubiparipovic solidified the win with his second in the 72nd minute. Heinemann was again involved, releasing Ryan Richter down the right side of the box to dribble to the end line and whip in a cross on the ground. The ball found Paripovic, whose initial shot was blocked, but the attacker then found the upper-left 90 in spectacular fashion with the second shot.

After the result, FC Edmonton is just one spot out of a place in the postseason. The Eddies are level on points with the Strikers with just four games to play.

It was another disappointing home performance for the New York Cosmos, as the Spring Season champions side needed an own goal to draw the Atlanta Silverbacks 1-1.

In the 15th minute, Andres Flores Mejia drew out the goalkeeper and chipped in a ball for Leo Fernandes to head home, but the Cosmos winger nailed the crossbar.

The first goal came for the Silverbacks in the 38th minute. Junior Burgos whipped a free kick to the penalty spot, and Michal Mravec headed home for the 1-0 lead.

The Cosmos would equalize in the 70th minute, as Silverbacks defender Simon Mensing made an unforced error to put the ball into his own net off of a corner. Without a Cosmos attacker in his area, Mensing volleyed the ball past his goalkeeper.

Now four points behind the Fury in the combined standings, it seems the Cosmos will have to settle for the second seed in the playoffs. There are four regular season matches left, though.