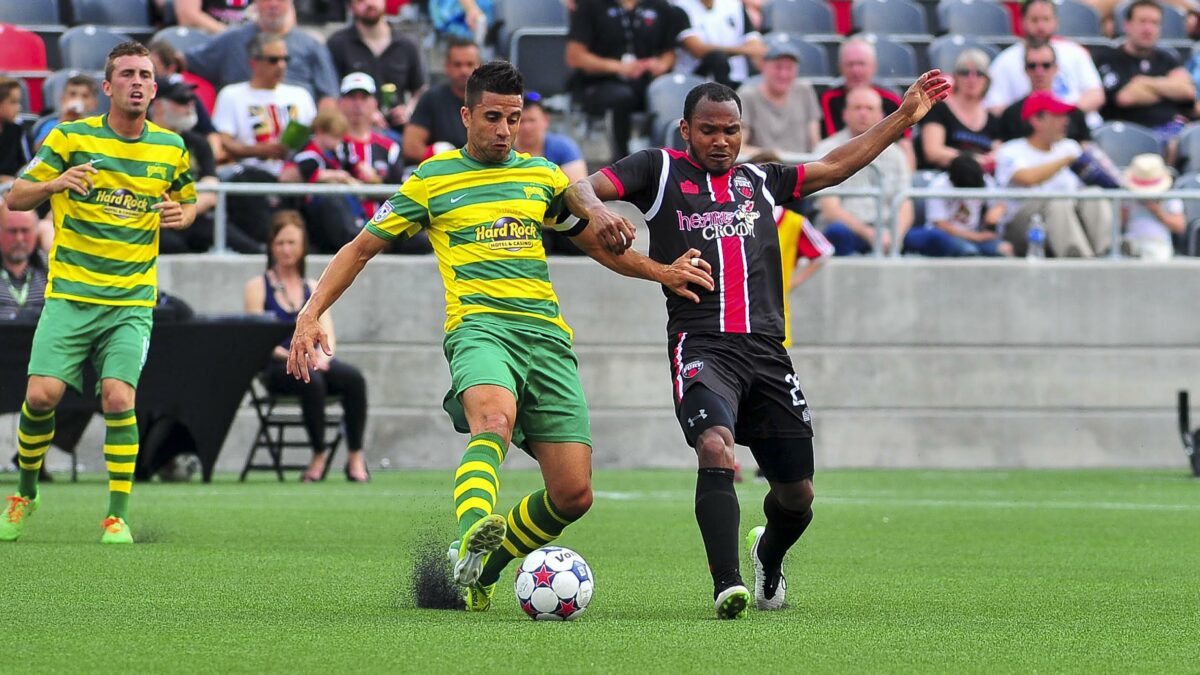 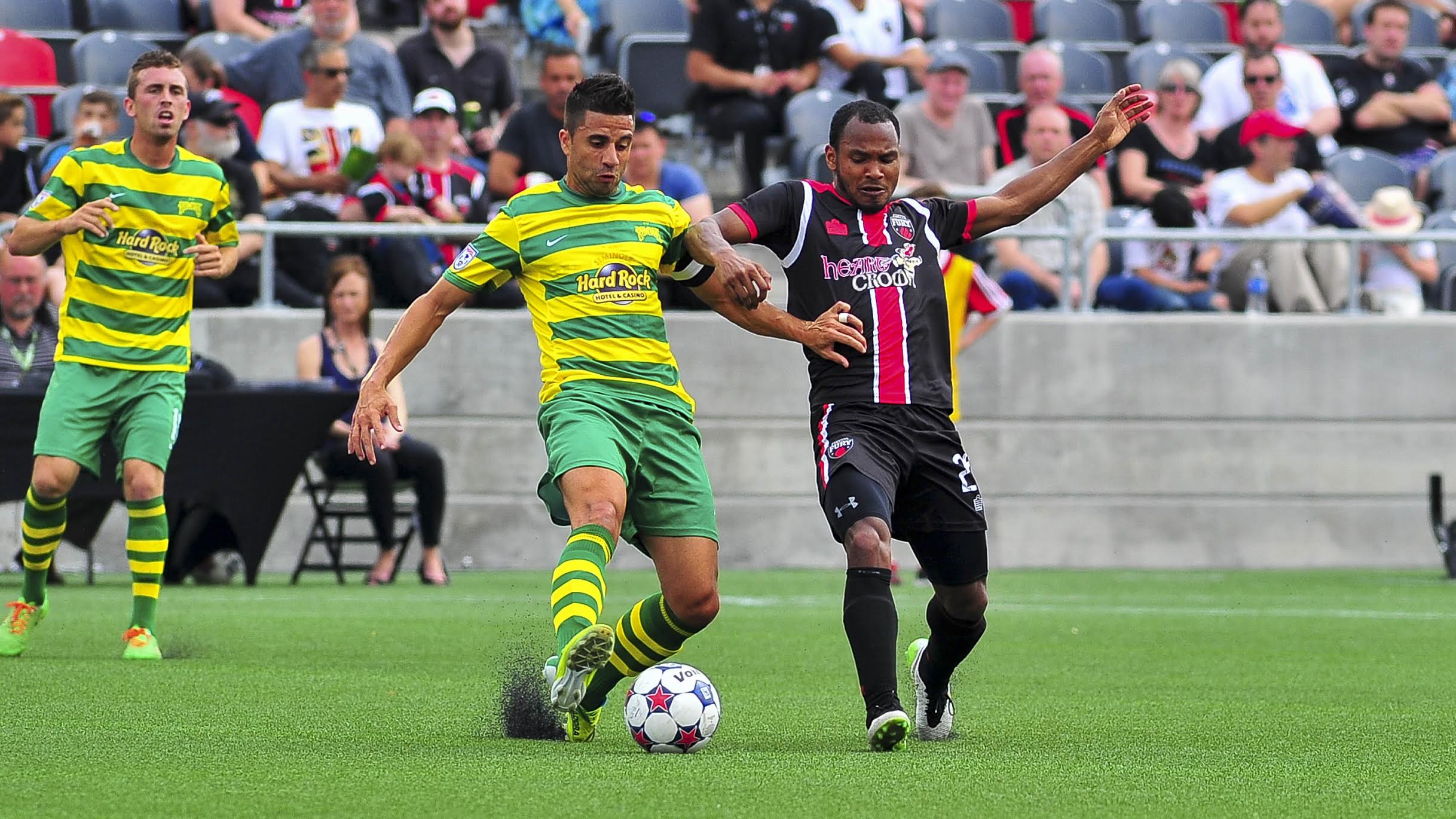 The playoff picture could be a lot clearer after a weekend of top match-ups in NASL.

First through third in the combined standings will face off against fourth through sixth in this round of action.

On Saturday night, the hottest team in the league, Minnesota United, will host the Fort Lauderdale Strikers. United won this match-up in southern Florida two weeks back, scoring five on the road against the Strikers.

Also on Saturday, Freddy Adu and the Tampa Bay Rowdies will host the first place Ottawa Fury. While the Fury virtually have a playoff spot secured, the Canadian side will continue to play tough in order to clinch the top seed. Expect the Rowdies to also put it all on the line, though, with the team in the midst of a three-way race for the fourth playoff spot.

The weekend of NASL action will come to a close on Sunday in New York, as the Cosmos face FC Edmonton in a battle of second against fifth place. The Cosmos will be looking to follow up their midweek win with three more points at home, and string two wins together for the first time since mid-August.

Here’s a closer look at this weekend’s matches:

Two teams with little-to-no chance at the playoffs face off on Saturday as the Carolina RailHawks host the Jacksonville Armada.

The Armada have picked up four points from their last two games, while the RailHawks have earned only one draw in their last three.

Nacho Novo and Tiyi Shipalane are both attacking talents that can always pop up for the RailHawks. On the other side, Armada fans can expect a surging Jaime Castrillon to find the net, with Akeil Barrett also due for a goal.

Indy Eleven will host the other match without playoff implications this weekend, as they welcome the San Antonio Scorpions on Saturday night.

The Eleven have suffered a string of poor results over the past few months, but did manage a 1-1 draw in Jacksonville last weekend. Look for Wojciech Wojcik to build on his solid performance last weekend and watch out for the speed and ability of Dane Richards on the wing.

The Scorpions have given up seven goals in their last two matches, so expect them to earn zero points on the road unless their attackers can come up big. Those attackers are likely to be either Cesar Elizondo or Marvin Chavez, but do not be surprised to see Omar Cummings come into the game late and make an impact.

Stuart Campbell must have his Tampa Bay Rowdies side firing on all cylinders to take three points away from the best team in the league Saturday.

When the Fury travel to central Florida to take on the Rowdies, they will be looking for their fifth straight win. The Canadian side must keep that winning form in the final matches of the season in order to fend off the Cosmos, who are within one point of stealing the top playoff seed.

Marc Dos Santos can count on Sinisa Ubiparipovic, who scored a brace last weekend, and Tom Heinemann to lead his side to a result this weekend.

The home team is in desperate need of a win after an unexpected loss to the Armada last time out. The Rowdies sit in fifth place at the moment, but are level on points with both the Fort Lauderdale Strikers and FC Edmonton as the teams all fight for the final playoff spot.

Freddy Adu, who has now started two matches for the Rowdies, will certainly be the one to watch for in this match on the left wing.

Minnesota United had the Fort Lauderdale Strikers completely figured out when they dismantled them on the road 5-2 just two weeks back. But since then, the Strikers hit their stride in a 4-2 drubbing over the San Antonio Scorpions.

Stefano Pinho has been absolutely phenomenal for the team from south Florida, with the Brazilian striker scoring 15 goals this season. Winger PC has also been important as of late, notching two assists in last weekend’s win over the Scorpions.

United has taken seven points from their last three matches and shows no signs of slowing down as it heads into the post-season.

The philosophy of Manny Logos has this side playing at an extremely high level in the most important part of the year, and United has shown the ability to out-class any NASL opponent based off of recent performances.

Last weekend, it was a goal from Christian Ramirez that sunk the Rowdies. Look for Ibson to dictate the pace of this game for the home team.

The New York Cosmos will look to continue their fight for the top spot in the combined standings on Sunday afternoon, as they host a FC Edmonton side that is fighting for its playoff life.

After an underwhelming draw against the Atlanta Silverbacks at home last weekend, the Cosmos managed a dominant 3-0 road victory against the same opponent on Wednesday.

Argentine newcomer Gaston Cellerino scored his first goal in a Cosmos shirt, with Sebastian Varela and Leo Fernandes also getting on the board. After being rested midweek, look for Lucky Mkosana and Raul to be fresh and ready to make the difference for the Cosmos on Sunday.

Just two weeks ago, FC Edmonton hosted the Cosmos and pulled out a 2-1 victory thanks to two goals just before halftime. Lance Laing and Daryl Fordyce were the Eddies that put the game to bed, scoring goals just two minutes apart to sink the Cosmos.

The Eddies will also be looking to avenge a tough loss last weekend, when they were dominated by fellow Canadian side Ottawa Fury.