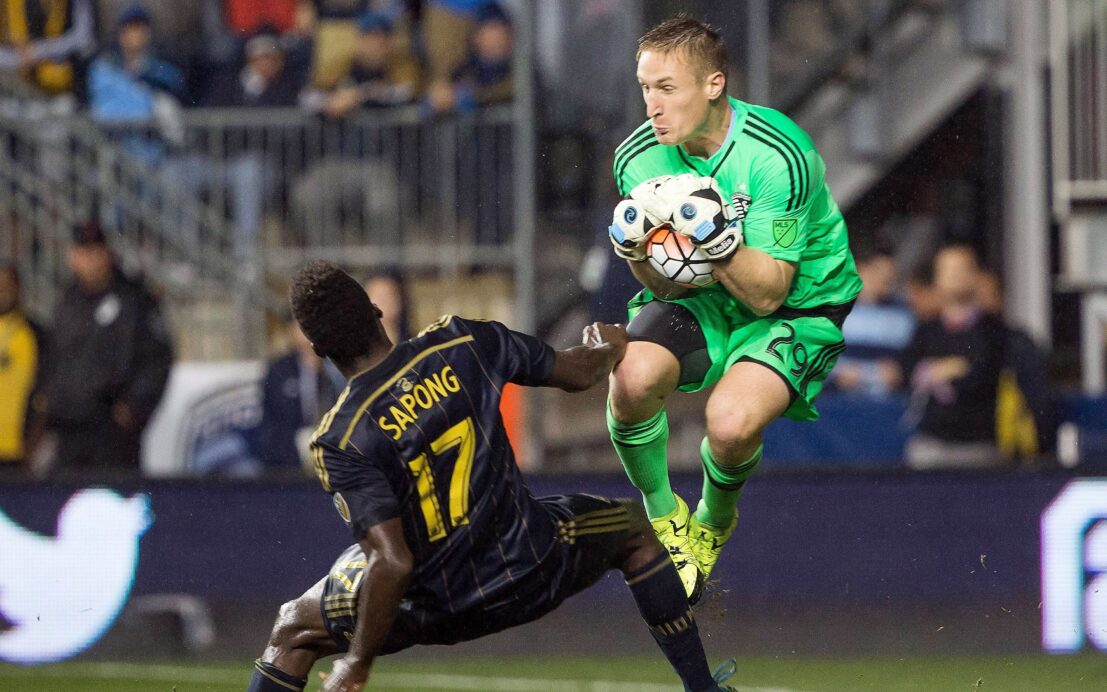 CHESTER, Pa. — Tim Melia made a costly mistake in the first half that put his team in a hole.

Rather than dwelling on it and succumbing to the pressure of playing in a final, Melia learned from it and bounced back with a huge save on a similar play that kept Sporting Kansas City from possibly being put into submission.

Sporting KC won the 2015 U.S. Open Cup final on Wednesday night by topping the Philadelphia Union, 7-6, in a penalty shootout at PPL Park. While Melia came up with two saves in the eight rounds of spot kicks to give Sporting KC its second Open Cup trophy in four years, his biggest stop may have come in the first half.

After being at least partially to blame for allowing Sebastien Le Toux to score the Union’s opener in the 23rd minute, Melia delivered a huge block on the Frenchman 14 minutes later. The 29-year-old goalkeeper did not hesitate on this play, rushing off his line to cut off the angle and stop Le Toux’s lobbed effort.

“The way the ball was spinning, it was an in-swinger, and I thought it was just going to skip off the turf and come to me and it didn’t,” Melia said of the goal Sporting KC conceded. “I tried to step up and close the space but I was late. It was my fault. The ball was played in a little differently the second time, but I knew (Le Toux) was either going through me or I’m not going to be late again.”

Melia’s determination to stop Le Toux proved fruitful, and it kept the score at 1-0 to prevent Sporting KC from falling further behind against a Union side pushed on by its trophy-starved home crowd.

Kansas City ultimately rallied, using a gorgeous, one-timed curler from Kriztian Nemeth in the 65th minute to force extra time and then the penalty shootout. In total, Melia had seven saves over the course of the 120 minutes before stopping Maurice Edu and Andrew Wenger in the dramatic penalty shootout.

For Melia, Wednesday’s accomplishment of lifting the Open Cup trophy is undoubtedly one of his career highlights. It might not be the ultimate prize, but it serves as a reminder of how far Melia has come from his days as a journeyman reserve goalkeeper to now aa Sporting KC’s undisputed No. 1.

“What I love about Tim is that he fits into our environment,” said Sporting KC head coach Peter Vermes. “He’s one of these guys that has tried a couple of different places, maybe he’s had some bad experiences, but he’s got a great mentality, he works his butt off, he fits in with the team.

“I think he’s a big story in all of this because when he first started for us the first game I think he had played five MLS games and lost all five. He’s been money ever since.”

Melia has started almost all of Kansas City’s league games since the beginning of May, amassing 19 starts and recording seven shutouts. His steady performances in goal have helped the club move on quickly from the loss of Luis Marin, an experienced offseason addition who entered the year as Sporting KC’s starter but left before the campaign ever really got started.

That Melia was even in a position to take Marin’s spot as the incumbent was down to what the New York native showed in 2014. Melia had spent a week with Sporting KC as an MLS pool goalkeeper last season, and it was in that short amount of time that he made a lasting impression on Vermes.

“I remember just watching him in training and saying, ‘Man, there’s something about this kid,'” said Vermes. “He finished up the season in the playoffs with D.C. United and when they got knocked out we immediately put a call to him and said, ‘Hey, look, we want to bring you in and train you for a few days and make a decision.” Then, we signed him.

“We actually sent him to (club affiliate Oklahoma City Energy head coach) Jimmy Nielsen and they worked him out. They were supposed to work him out for five days. After the third day, he called me and said, ‘There’s no doubt he can be a back-up for you guys.”

Melia has not only shed the ‘back-up’ label in recent months, but he has demonstrated why he just might be the long-term solution in goal for Sporting KC. Melia has made the most of his opportunity, and Wednesday night’s performance only further emphasized that.

Yes, he might have had a hiccup in the first half, but he made amends and delivered when he was needed to help Sporting KC become U.S. Open Cup champions.

“What can you say? The guy keeps us in games, and he’s been incredible for us,” midfielder Graham Zusi told SBI. “MVP for me tonight.”