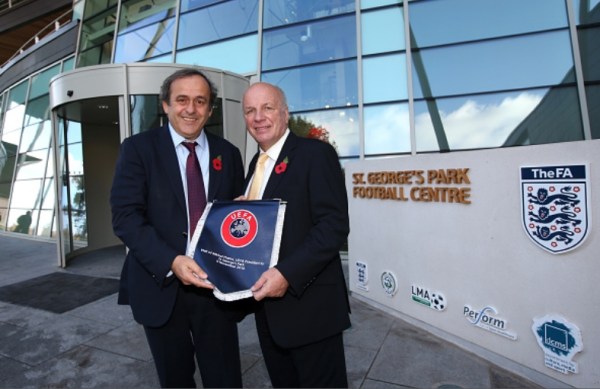 Despite being under investigation, Michel Platini still has some supporters to become the next FIFA president next February.

One of those supporters is the English Football Association, which came out in support of the current UEFA president Wednesday.

“In July, the FA board decided unanimously to support Michel Platini if he intended to stand for the presidency of FIFA,” a statement from the FA read. “We did so because we thought he was an excellent president of UEFA and could bring those same leadership qualities to FIFA. We are still of that view.

“However, events of recent days have raised a number of issues which do need to be fully examined. We are following the ongoing investigation initiated by the Swiss attorney general with which Mr. Platini is cooperating in full. We also recognize that Mr. Platini has contacted the FIFA ethics committee inviting them to look into the matter and to interview him.”

Swiss authorities have been questioning Platini about payments he received from FIFA president Sepp Blatter while doing work from 1999-2002.

Mario Gotze may be a German hero for netting the game-winning goal in the 2014 World Cup Final, but performances at the club level have left some people to criticize his work-ethic.

Philip Lahm is not one of those people.

Lahm told Sport.de he can absolutely refute the claim that Gotze is “lazy in training,” and, in fact, he is one of the hardest-working players on the team.

“I see him every day and he is one of the most diligent in terms of preparation for training and regeneration afterwards,” Laham said. “He is very young, but has already experienced a lot. When so much criticism breaks on such a young player, it’s not easy. We have done our best as a team to support him, he is fully integrated.

“We know how important he is. He has shown it not only last year, but also this season. He can make the difference. He knows that, so I am not worried about Mario.

Daniel Sturridge may be recovering quickly from a recent hip injury, but he isn’t ready to join the national team just yet.

The English national team announced their roster for the upcoming European Championship qualification matches on Oct. 9 and Oct. 12, and the Liverpool star was not included. Tottenham Hotspur midfielder Dele Alli and Liverpool forward Danny Ings have been called in for their first senior team call-ups.

Sturridge scored twice in the Reds’ 3-2 win against Aston Villa Saturday, but because England has already qualified for Euro 2016, boss Roy Hodgson decided to let him remain with his club.

A UEFA-FIFA friendly game was called off due to ongoing investigations into Michel Platini and Sepp Blatter. (REPORT)

After being suspended from the Ghanaian national team and released in May from Shalke, Kevin-Prince Boateng will train with AC Milan until the end of the year. (REPORT)

Former Brazil federation president Jose Maria Marin will pay $10 million to be moved to New York while he awaits a ruling for his part in FIFA’s scandal. (REPORT)