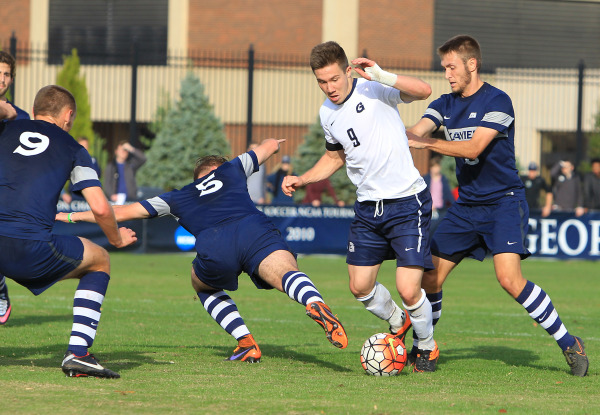 While many top teams across the country were upset in their respective conference tournaments, everything went as expected in the Big East Conference.

Georgetown and Creighton both advanced to the conference final after defeating Xavier, 1-0, and Providence, 2-1, respectively.

The Hoyas broke a team record with their win on Thursday, as the program extended its win streak to 12 games. Thanks to a goal from senior forward Brandon Allen, the Hoyas also extended their unbeaten streak to 15 games.

Creighton, on the other hand, used a goal from freshman Joel Rydstrand and Fabian Herbers’ 15th tally of the season to eliminate the Friars.

Meanwhile, the ACC tournament final is also set, but the two teams set to do battle are not the two that many predicted to be there.

Syracuse continued its incredible run in the tournament, upsetting Clemson by a scoreline of 2-0 on the road. The Orange will meet Notre Dame in the final after the Fighting Irish secured a 1-0 road win against SBI No. 1 Wake Forest.

Another ticket to the NCAA Men’s Soccer Tournament was punched on Tuesday, as Rider took down Monmouth, 3-2, in the Metro-Atlantic Conference.

Out West, Denver remained the country’s lone unbeaten side with a 4-0 romp of Western Illinois in the Summit League semifinals.

Here are the results from this week’s tournament action: