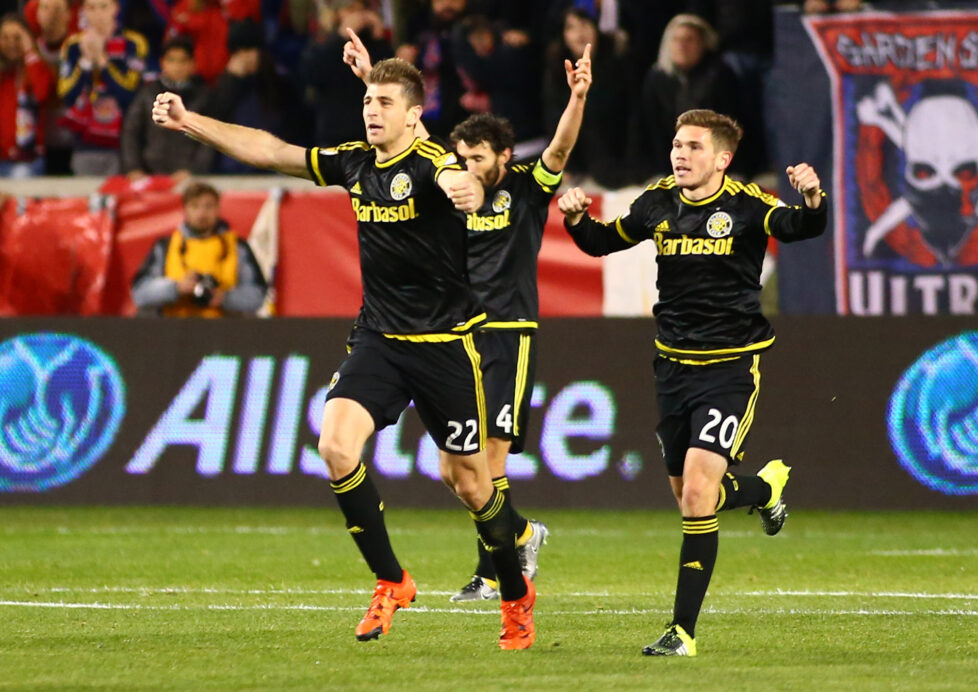 HARRISON, N.J. — The Columbus Crew had established a healthy lead in the first leg, and they did just enough to protect it in the second.

The Crew reached the MLS Cup Final on Sunday despite losing the second leg of the Eastern Conference Finals, 1-0, on Sunday night at Red Bull Arena. The result gave the Crew a 2-1 aggregate victory after they prevailed by shutout in the opening match at Mapfre Stadium in Columbus, Ohio, a week ago.

The Red Bulls struggled to come up with quality scoring chances throughout the decisive leg, but nearly pulled off a miraculous comeback in the series in the waning moments. Substitute forward Anatole Abang flicked a ball with his head into the back of the net three minutes into second-half stoppage time, and that opened the door for a late equalizer.

Bradley Wright-Phillips was cruelly denied by the post on a nodded effort of his own a minute later, however, leaving the Red Bulls and sold-out crowd in disbelief.

Gregg Berhalter’s side will now host the Portland Timbers in the championship bout on Dec. 6. The Timbers tied FC Dallas, 2-2, on the road earlier on Sunday to take a 5-3 win on aggregate in the Western Conference Finals.

In need of two goals to salvage their season, the Red Bulls struggled to come up with clear looks in the final third. Sacha Kljestan had one of the best opportunities for the hosts in the 73rd minute, but his low blast from distance was parried away by Crew goalkeeper Steve Clark.

It was the Crew who had most of the quality scoring chances, and they nearly found a big away goal early in the second minute. Ethan Finlay got on the end of a pass all alone in the penalty area before getting denied by Red Bulls goalkeeper Luis Robles.

Kei Kamara nearly scored six minutes later off a feed from right back Harrison Afful on a quick counterattack, but Kamara’s ensuing shot from an angle was denied by Robles.

Robles repeatedly came up big to keep the Red Bulls alive in the series. He also dove low to his left in the 38th minute to stop a precise shot on the turn from Kamara at the top of the 18-yard box.

It was not until the second half that Jesse Marsch’s side found a little more success in the attacking third, but the Crew’s defense still held firm. That is, until the late-game chaos.

Abang headed past Clark to give the Red Bulls a chance two minutes into stoppage time, but the club and its fans could only look on in agony as Wright-Phillips was denied by the low part of the right post.