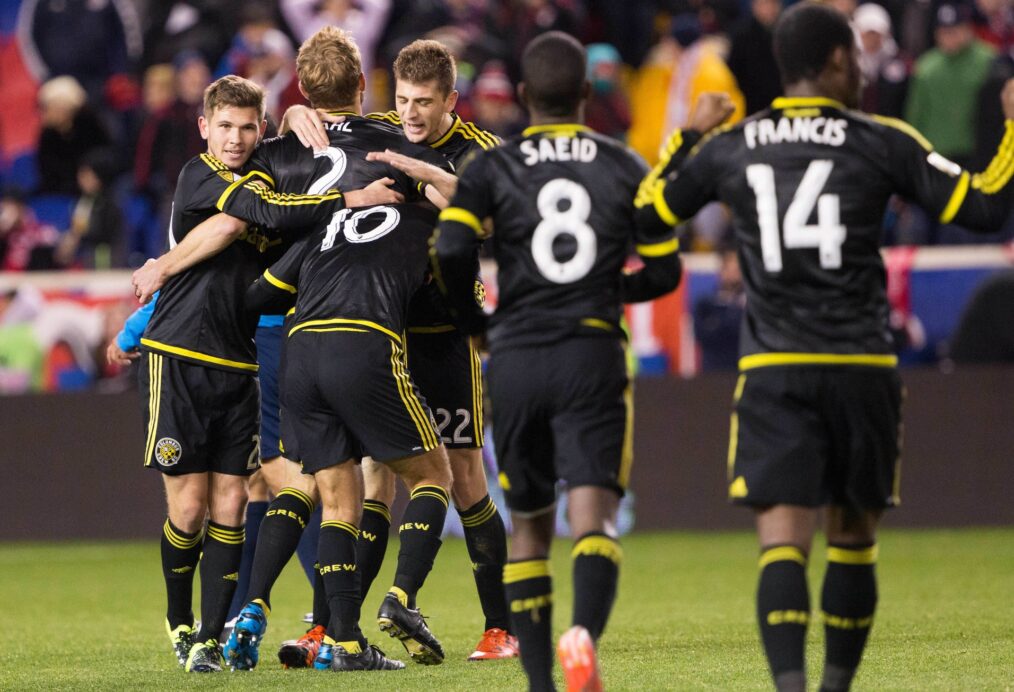 HARRISON, N.J. – Despite what had just been achieved, the visitors’ locker room at Red Bull Arena proved to be anything but out of the ordinary.

There was no champagne, no exuberance and certainly no celebratory declarations, save for the ones made by music artist Drake via a small speaker set in the corner of the room. Players mingled as they do and seldom mentioned the result that just put them one step closer to their ultimate goal.

Rather, there was a unified belief that a two-year long journey is just one week away from reaching its potential peak.

After claiming the opening leg of the Eastern Conference Finals, the Columbus Crew held on to defeat the New York Red Bulls via a 2-1 aggregate scoreline. Even so, Sunday’s triumph provided little reason to celebrate for a Crew team that has learned full well to never look too far ahead when it comes to postseason soccer.

“I want the guys to enjoy it. I certainly do,” head coach Gregg Berhalter said. “It’s not that I don’t think they have a drink of alcohol tonight; that’s not what it’s about. We have bigger fish to fry and I wanted them to enjoy it on the podium, enjoy the trophy, but I told them they’re going to be remembered for the trophy they win next week, not the one they won this week.”

The victory, which vaults the Crew to the MLS Cup Final for the first time since 2008, proved to be just the latest step in a maturation process that began with a much-needed humbling in last season’s playoffs.

Facing off with the New England Revolution, the Crew were admittedly naïve, and were punished time and time again. Out of it before even reaching the second leg, the Crew learned a valuable lesson that all the belief and desire in the world can’t make up for a lack of maturity.

Having run the gauntlet late in the season, the Crew’s maturity has shown in spades. After dispatching Didier Drogba and the Montreal Impact, the Crew slid past the Supporters’ Shield-winning Red Bulls, signaling their status as much more than an up-and-coming team.

“We had an unbelievable stretch at the end of the season, and that’s what we had before,” said winger Justin Meram. “We knew that we can’t be too high on that. We put ourselves in a great position with a three seed last year, and then we came out with a stinker. This year we did the same thing and we knew that it’s really time to focus.”

“We feel like we’re battle tested, that’s for sure,” added captain Michael Parkhurst. “Even the way we finished the regular season, we had a lot of big games against playoff teams. It wasn’t easy. We had to fight to get to second place, and looking back, it was so important that we did. The team has fought really hard and we feel like we’ve been through our ups and downs, but learned from our downs.”

Despite all of the lessons learned in 2014, the Crew’s 2015 season was just an inch or two away from unraveling. After conceding a late goal to Antanole Abang, the Crew saw their lead shrink to just one entering the later stages of stoppage time with time ticking on the Red Bulls season.

That season nearly extended, as Bradley Wright-Phillips leapt and headed a shot up and over goalkeeper Steve Clark and towards the back of the net.

Parkhurst conceded that he was praying for the final whistle. Kei Kamara admitted that he feared for the worst as he watched “the impossible” suddenly become very, very real.

“You hate to see it potentially all fall apart,” Berhalter added, “but the guys hung in there. Give them credit.”

The Crew deserve that credit in full and were almost assuredly the better side through two legs. Time and time again, the Crew were able to stifle the Red Bulls’ midfield press, while Wright-Phillips, Lloyd Sam and Mike Grella were held all but in check throughout the 180-plus minute.

With that performance in the rearview mirror, it would seemingly be time for the Crew to look ahead to an MLS Cup on home turf. The Portland Timbers await as the Crew looks to lift the team’s second title.

His typical self, Berhalter remained stoic, much like the team he has sculpted as head coach and technical director. At long last, the Crew’s journey, one that truly began with a postseason thumping just over one year ago, will conclude in front of their home fans on Sunday afternoon.

“We’ll find out next Sunday, won’t we?” Berhalter said when asked if his team has what it takes to claim the title.” I have no idea. I think it’s going to be two good teams. I like where our team is at right now. I like the confidence level of the team and I like how we’ve performed these last weeks. We’ll see.”

“We took care of business with what we needed to do here,” Meram said, “but our ultimate goal is not there yet. There’s no reason to celebrate. We’re going to stay humble through this win and next week is when everything you’ve played for, trained for, everything leading up to it, this is when it counts. An Eastern Conference championship is good, but MLS Cup is when the champagne can really be out.”