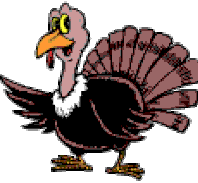 Hello everybody. It is Thanksgiving Day, that day of the year you come to SBI looking for a soccer fix and find this familiar waving turkey greeting you.

American soccer fans have plenty to be thankful for this year. From the continued growth of professional soccer, with MLS, NASL and USL all growing and gaining momentum, down to the college soccer scene, where more talent is expected to emerge than in 2014. We also continue to see a growth in the number of TV viewing options for soccer, and there are also more and more media outlets who have seen the importance of covering soccer.

As has become the tradition on SBI, here is my list of things I’m thankful for in 2015:

The readers, and listeners, who help make this job worthwhile.

The SBI staff that helps keep the site rolling on a daily basis, and has helped us complete our eighth full year as an independent soccer news website.

The success that many former SBI staff members are continuing to enjoy in the soccer media world.

SBI Soccer’s move to the USA TODAY Sports platform, which we will be hoping leads to a better and more successful site.

Year three of The SBI Show, which has enjoyed almost a milion downloads more than 240 episodes.

Year three of working at Goal.com, with a great team of  co-workers who have helped the site reach new heights.

A growing soccer fan base in the United States, and more soccer news outlets than ever before.

My sons going from uninterested in soccer to soccer players and soccer experts in a year, including my eight-year-old, who can identify players from all over the world, including all 22 starters in the recent edition of El Clasico.

The arrivals of Orlando City and New York City FC to MLS.

The continued influx of international stars into American soccer, such as Didier Drogba, Andrea Pirlo, Raul and others.

My first trips to Trinidad and Montreal.

Last, but certainly not least, I’m thankful my family for being understanding about all the trips I take and all the soccer I watch.

These are just some of the things I’m grateful for when it comes to 2015. I’m sure I could make this list twice as long.

Now it’s your turn. What will you be giving thanks for as a soccer fan today?