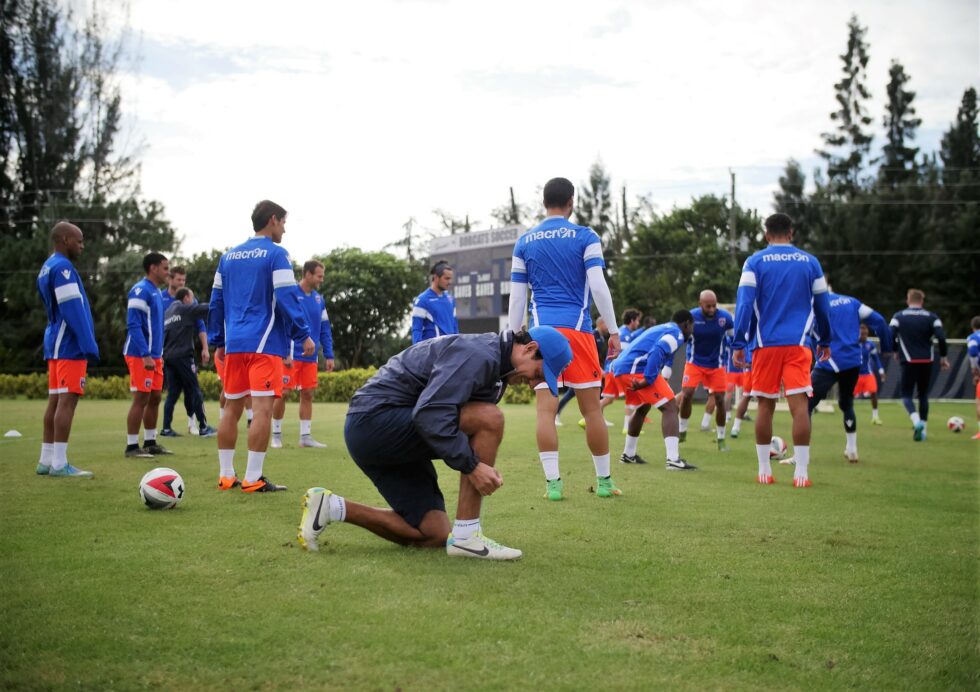 Miami FC general manager Cesar Velasco has been through this process before. A former executive at Maple Leaf Sports & Entertainment, Velasco has seen a team built from the ground up and endured the pressures and frustration that come with it.

Yet, Velasco will be the first to admit that what is going on with Miami FC is a whole new kind of challenge.

Alongside famous faces like head coach Alessandro Nesta and owner Paulo Maldini, Velasco is charged with building a roster, and club, from the ground up. Set to start play in the NASL in just several months, Miami FC continues to take shape, both on and off the field.

For Velasco, the process of building a club comes with several rules. The first: Don’t panic. Mistakes will be made, variables will be shifted and frustration will begin to mount, but panicking will help no one involved. The second: Learn from your mistakes and adapt them to the situation at hand which, in Miami, is one unique to both the American and world soccer landscape.

“It doesn’t matter if you do it once or twice. This is the second time that I’ve done something similar to this but it’s completely different,” Velasco told SBI. “In the sports world, starting a franchise is something that not everybody can experience. Starting from scratch, where there’s absolutely nothing, is even more unique because you have to go through the growing pains of a startup, the growing pains of setting up a new office, and starting a sports franchise is a lot of human relations that are involved.

“Our assets are the players, and when you’re looking at securing your assets and you’re starting from zero, it’s a unique experience. It’s amazing, it’s hard and every day is different, but the reward of having the opportunity to do something like this for any executive in any position, it’s amazing.”

Speaking generally, Velasco says the end goal of Miami FC is to become the city’s team. The general manager says that the ethos of the club revolves around being personable and reachable even with the legendary figures that will be roaming the sidelines and board room.

In the short term, the goal is merely to assemble a roster that can compete from Day 1. Admittedly, that process is a bit easier for Miami FC than many other expansion clubs, as the names Nesta and Maldini continue to carry a lot of weight in the soccer world. The two names may not get you a signed contract, but they can get you a conversation with almost any player familiar with two of the best defenders to ever play the game.

With that in mind, Velasco says there is a process the team goes through when it comes to finding talent on the local and international levels. The first step is to find what the club identifies as “key players,” ones that will be instrumental in implanting the style of Nesta while leading from within. Then, the club must surround those players with teammates that will complement them and allow the group as a whole to flourish.

Limited in the amount of international additions, Velasco says its important that the club remains patient, yet aggressive. To this point, the club has made splashes with the signings of players like former English Premier League midfielder Wilson Palacios, Argentine striker Dario Cvitanich and long-time MLS veteran Dane Richards. The club is forced into being a bit picky when it comes to bringing in talent of the international variety, but will continue to do its due diligence well after the 30-man roster is filled.

“Its a full-time job. We started looking at players in April and didn’t sign a player until October,” Velasco said. “You go through a lot of scouting, a lot of videos, a lot of traveling to go and watch players play that they don’t even know that someone is watching them. In our case, we need to look at every single professional league in the U.S., the American players abroad and you identify your list of everything, your top players, your wishlist. You start going down and looking at the people that you want to bring in that are your key names and as you sign those key players, you start filling in the blanks that you have.

“It never ends. It doesn’t matter if your Manchester United, Miami FC or any team in the MLS or NASL today. You go to any coach or any general manager and you’ll never stop looking for players. Every single day, you’re looking. When we started, we had all 30 spots in the roster empty. Sometimes, you’re looking for five or six. Here, we were looking for 30 and we’re getting close. We’re hoping that, by the end of January, we’re going to have around 17-20 players signed, so then we can hit the second stage of preseason with the core of our roster signed and secured while looking for a few players to fill in the empty spots in mid-February or the end of February.”

While the short-term process of adding players is daunting, Velasco still has his mind on the long term when it comes to taking full advantage of the wealth of talent in the South Florida region.

Born and raised in Mexico, Velasco has an old-school method of youth development. In his eyes, local players are raised alongside the club nearest to them, and when the time comes, those players will get a chance to shine with the team they have always idolized.

In South Florida, there is no shortage of talent. Now, Velasco says, it’s about tapping into that talent and simply giving the youth of Miami the platform and opportunity required to mold that talent into that of a professional.

“I would like to see the kids that are playing today at the Under-10, Under-11, Under-12 level step in to the training field five or six years from now to start trying to become a professional player,” Velasco said. “I hope that they can do that because they are a part of our community, not because they have an agent or a contact or a connection with a team. I want it just because they have been there watching us play and they want to come and train with us.

“That’s our objective. That’s what we want to do here. It’s kind of an old-school style of soccer development that we bring from different countries, but that’s how I grew up.”

With both short- and long-term goals defined, it now becomes about putting it into practice. Set to debut in NASL play on April 2, Miami FC is sure to face all of the growing pains that come with an expansion side. With new players, a rookie coach and a whole new club to maintain, Miami FC knows that the first several months may not be the easiest in the club’s history.

According to Velasco, though, those growing pains will make the team what he wants it to be: an elite club in both the NASL and the U.S. as a whole.

“We’re putting together what we believe will be the best team in the league,” Velasco said. “Our coaching staff and technical staff is second to none. Not only in the NASL, but I’d put them in front of almost any coaching staff in the U.S. We need to get experience on the field and we need to have our players here to understand and buy into the concept that the coach wants to transmit and the way he wants to play.