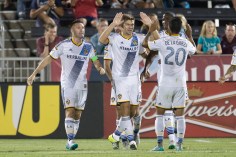 Two more MLS sides will get a crack at the CONCACAF Champions League quarterfinals on Wednesday, when facing off against a pair of fierce Liga MX competitors.

Real Salt Lake will look to start 2016 off on the right foot when the team travels to Estadio Universitario to take on Tigres, while the LA Galaxy will host Santos Laguna from the StubHub Center.

No MLS side has ever won the CCL in its current format, now in its eighth year. The Galaxy did however win the Champions Cup, which was later renamed the CCL in 2008.

After undergoing a lot of turnaround this offseason, Real Salt Lake begins its 2016 season against Tigres.

Last season, RSL hovered near the Western Conference basement of MLS for most of season, and with the loss of players like Luis Gil and Luis Silva, the team is certainly faced with some challenges. The additions of former attacker Yuri Movsisyan and veteran defender Chris Wingert will certainly give the team a positive outlook on the season though.

“Our expectations are to advance in the Champions League,” Wingert told SBI. “It’s a tournament that’s been important to us for a number of years now. With us making a good run back in 2011, but still coming up short in the end, it’s a competition that everybody wants to win. The guys that were here back in 2011 are really itching to get back and have another opportunity to try to hoist that trophy.”

For Tigres, which currently sits fifth in the Liga MX Clausura standings, Mexican international Javier Aquino leads the way for Ricardo Ferretti’s side. In seven league matches this season, Aquino has netted two goals and three assists, while teammate Alonso Zamora leads the team with two goals in the CCL. However, Aquino has been ruled out of tomorrow’s game with a tendinitis injury.

The two clubs will play their second leg fixture on March 2 at Rio Tinto Stadium in Salt Lake City, Utah.

If any MLS side is built to win this year’s CCL, it’s most likely the LA Galaxy.

Star power is on full display in Bruce Arena’s squad, which features attacking players like Robbie Keane, Giovani Dos Santos and Steven Gerrard, among others.

Santos Laguna will be a massive test for the Galaxy though, as they are balancing their preseason MLS schedule in preparation for the upcoming season. Djaniny and Luis Ángel Mendoza will be two players for the Galaxy to keep their eyes on. The two players have combined for five goals in this year’s CCL competition, and there could definitely be more on the way.

While Santos has never hoisted the CCL trophy, the Mexican club has finished runner-up twice in back-to-back seasons in 2011-12 and 2012-13. It lost to fellow Liga MX side Monterrey both years.

The Galaxy and Santos will play their return leg match at Estadio Corona on March 1.