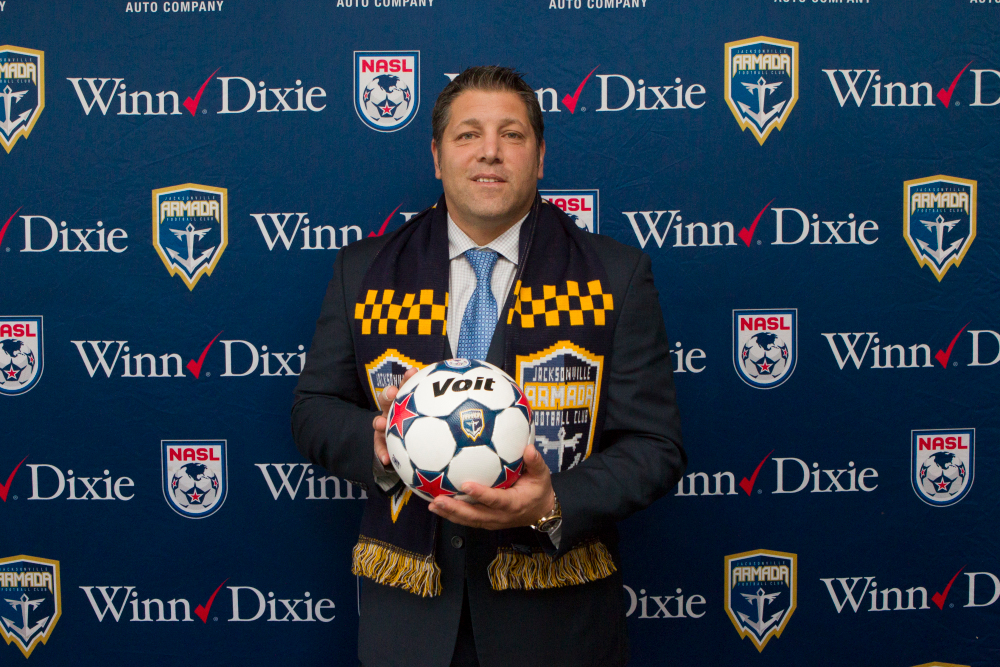 Tony Meola, the coach, knew he was in for a challenge when he took the reigns with Jacksonville Armada. But first, Tony Meola, the technical director, had to pave the way by reshaping and reloading a club in need of a facelift.

Entering his first head coaching job with the second-year club, Meola joined the Armada knowing the difficulties that would lie ahead. In taking over a team that finished second-to-last in the league, the Armada were in need of a rebuild, and Meola was brought in as the man to give it to them.

In the three months since his hiring, Meola has overseen a reconstruction that has seen nine new faces brought to the club, including former Ottawa Fury FC captain Richie Ryan, reigning USL MVP Matt Fondy and NASL veteran Junior Sandoval.

With the overhaul of the roster, Meola, the technical director, has given Meola, the coach, everything he needs going forward. At the end of the day, the former U.S. Men’s National Team goalkeeper knows that the dual roles give him sole responsibility, for better or worse, as he continues to shape the team to his vision in his dual role.

“Time management has been my biggest challenge because I’m in the technical director role,” Meola told SBI. “Either one of those roles takes a lot of time. Putting them together, I’ve been getting better at it, and to be honest it’s slowed down because, as our roster has filled out, we don’t have so many things to do with signing players and all of that. I would think that has by far been the toughest part of it.”

Throughout his first several months in charge, Meola was tasked with a series of goals for rebuilding the roster alongside assistant technical director Nathan Walter. While Meola utilized his connections from both his playing and broadcasting careers, Walter did what Meola called, for lack of a better word, the “grunt work” of dealing with visas, organizing friendlies and easing some of the pressure on the former goalkeeper.

Now in Week 5 of preseason, Meola, the coach, has been given the chance to take the reigns. Following a closed-door scrimmage against the New York Red Bulls, the Armada have knocked off both the Philadelphia Union and Orlando City in recent friendlies.

Meola is pleased with his roster’s makeup through the opening few weeks given the added depth and increased competition in a variety of places. With players like Haitian internationals Mechack Jérôme and Pascal Millien set to miss time for the Copa America, Meola says that fostering depth and competition have been the most important tasks of his job thus far.

“The first thing, and I talk about all of the boxes they have to check off, is that they have to be good soccer players,” Meola said of his roster. “We’ve done a lot of research in terms of what kinds of guys they are. Their resumes, I like to see if they have won championships. Have they been captains in their teams? I was looking for leaders and guys that know how to win. Those things were really, really important to me. When you look at the guys we have brought in, a majority of them have won something somewhere. That’s really vitally important to me. I think it’s important that, when things aren’t going well, you have guys like that to pull you out of the ditch a little bit.

With over a month still remaining until the regular season, Meola insists that the current roster is essentially complete. While the club is considering one or two more additions, Meola says that no drastic changes are expected to be made before kicking off in April.

Yet, Meola, the technical director, still has plenty of work to do away from the first team.

Building on the vision of owner Mark Frisch, the Armada announced on Feb. 10 that the club has founded an Under-23 team to compete in the NPSL. According to Meola, the club hopes it is the first step in assembling a more complete academy in a market that the team believes can develop top talent. In addition, the club is eyeing the introductions of teams at the U-16 and U-18 age levels within the next year or so.

“That was a big announcement for us, and we worked on that pretty much since the day I got here,” Meola said of the U-23s. “We were lucky that there was one already in town that was established and we were supporting. It kind of just seemed right when everyone got in the room. What we did in signing them, it was the next step for us. That was us saying, ‘OK, this needs to be under the Armada umbrella and we can grow this thing and we can attract more players.’ How that helps me is the fact that we’re able to scout an entire summer of college players. I know the (MLS) combine is big, but we essentially have our own combine here every day and we see these kids.

“We made the executive decision to use this as a U-23. I guess the other option is to have this as a professional second team, but we really wanted it to be about development. That’s the route we chose to take and I’m happy with that route because it stays in line with what we had been doing. It also gives us an opportunity to see young players and who knows? The idea is that they are excited to be a part of the Armada one day and maybe they’re here one day. That might take a couple of years for us, but we took the right first step.”

With roster construction in the past and a youth system set up for the future, Meola is now focused on developing what he has in the present. The Armada are planning to go forward as they stand, and the next several weeks of preseason will be vital in developing the skills and chemistry required to compete in the NASL.

To start preseason, Meola has utilized a 3-5-2 in the club’s first several friendlies. Committed to trying new things, Meola says the move to a 4-3-3 in the next several weeks will help him get a better grasp of the team’s personnel and where they all fit.

The system, Meola says, is fluid, and could look very different when the season kicks off on April 10 against the reigning champion New York Cosmos. But, the ideas and methodology of the team will not change between now and then as Meola looks to play his part in the rebuild of the club’s roster and vision heading into its sophomore campaign.

“This particular team last year, they possessed the ball a lot, according to the numbers,” Meola said. “The problem was that they possessed it on areas where it really didn’t matter for us, areas where we couldn’t be dangerous. We played far too slow out of the back and were far too deliberate. When you look at it, those areas have to be better and it’s something we’ve spoken about. It’s something that we continue to work on every day. The term is ‘play fast, but don’t play rough’. That’s what we’re using here. Taking care of the ball in the middle and final third of the field, being as patient as possible, I think those things are important.

“None of it happens overnight,” Meola added, “but we’re getting there.”