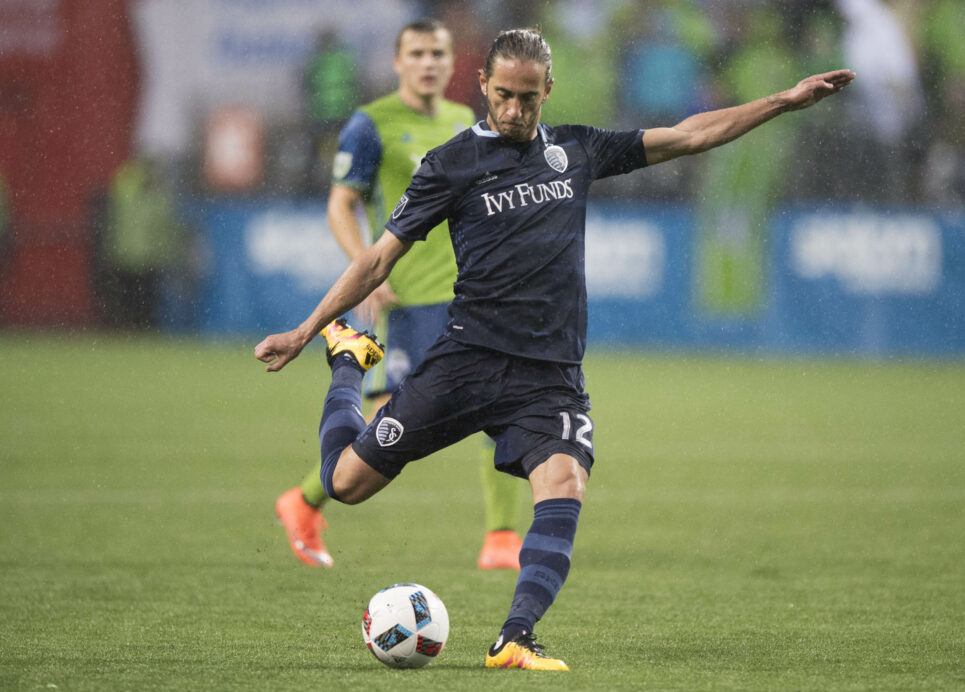 SEATTLE — The Seattle Sounders and Sporting Kansas City had nearly carbon copy finishes to 2015: the two sides wrapped up the regular season tied on points, and both were eliminated from the playoffs on penalty kicks. Their new seasons got off to distinctly different starts on Sunday night, however, as Kansas City utilized a man-advantage to escape the Emerald City with a 1-0 win in front of 39,525 at CenturyLink Field.

Newcomer Nuno Andre Coelho provided his team all the scoring it needed in the 73rd minute, skipping a right-footed shot from at least 25 yards out through traffic and past goalkeeper Stefan Frei, who perhaps misjudged the wet FieldTurf bounce.

“[Coelho] likes to go forward, which is a good thing,” said Sporting KC head coach Peter Vermes. “He comes unmarked and he hits a great ball — I think it’s a very tough ball because at that point the rain came and the ball really skid off the turf.”

“I’m sure it’s one [Frei] would like to face again,” said Sounders head coach Sigi Schmid, “because I am sure he’ll feel he can save that. But he’s made a lot of big saves for us.”

Osvaldo Alonso had an opportunity to equalize in the 78th minute, but stepped into a deflected ball and sent a one-touch shot from 14 yards out wide left.

Despite the disadvantage, the Sounders nearly opened the scoring in the 53rd minute when Andreas Ivanschitz unleashed a shot from the top of the area that forced goalkeeper Tim Melia into a diving save. Nelson Valdez’ over-the-head attempt on the rebound sailed out of play.

The course of the match changed in the 41st minute, when referee Alan Kelly issued a straight red card to second-year defender Oniel Fisher for a reckless two-footed challenge on Connor Hallisey. After playing a midweek CONCACAF Champions League match in Mexico City, the Sounders were forced to defend down a man for the entire second half.

For the first 20 minutes, the Sounders did everything except find the back of the net.

“The positive thing for me, said Schmid, “is that when we were even, I thought we were the better team.”

With Seattle controlling possession early, earning two corner kicks and a free kick in the process, Ivanschitz fed Jordan Morris with a one-touch through ball on the counter, releasing the Stanford rookie into the penalty area. Morris’ strike, however, sailed well into the stands.

“I just kind of rushed it a little bit,” said Morris. “I should have looked up and taken my time a little more. I just got underneath it, just got to keep working on that. It was frustrating because that would’ve changed the game for sure.”

In the 15th minute, Clint Dempsey nearly scored on a 23-yard free kick, forcing Melia into a leaping fingertip save. Chad Marshall’s header on the ensuing corner kick slapped the crossbar before Melia recovered the deflection. Moments later Alonso whipped a long-distance volley out of play.

Kansas City nearly opened the scoring against the run of play in the 21st minute, but Frei delivered a big save against Connor Hallisey, who had worked himself behind the Seattle defense to track down a through ball.

Hallisey’s shot marked a turning point in the half, with the visitors slowly wresting away possession and beginning to pepper the Sounders’ goal with shots.

Seattle, missing starting right back Tyrone Mears to a quad strain and starting midfielder Erik Friberg to concussion protocol, also lost captain Brad Evans late after the center back collided with Dom Dwyer late and injured his shoulder. While the injury initially looked serious — Evans spent some time on the pitch in obvious pain — Schmid said Evans could see the field as soon as next weekend.

Looking ahead, both teams are back in action on Saturday. The Sounders visit Real Salt Lake, while Kansas City hosts the Vancouver Whitecaps.

Here are the highlights of Sporting KC’s victory: