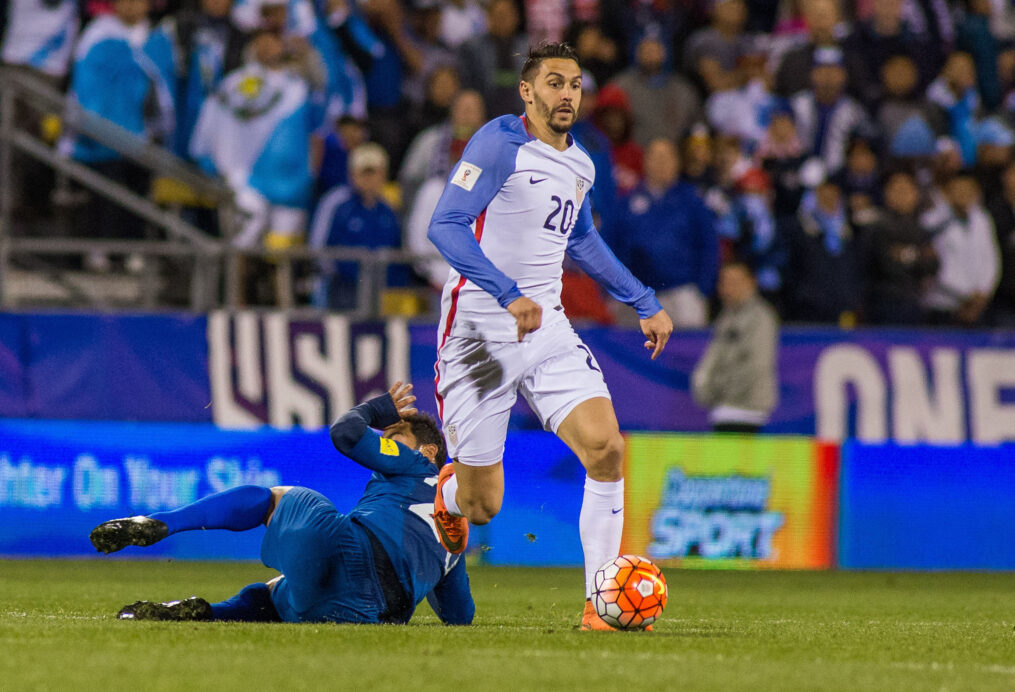 COLUMBUS, Ohio — Geoff Cameron made a big impact in the U.S. Men’s National Team’s lopsided win over Guatemala, but it was not just the goal he set up or the one he scored that helped his side enjoy such a strong performance.

The U.S. got back on track in World Cup Qualifying on Tuesday night by clobbering Guatemala, 4-0, in a game at Mapfre Stadium that was every bit as one-sided as the scoreline indicated. The Americans not only came out buzzing in the attack right from the start, but were also instantaneously suffocating on the defensive side. Guatemala finished the match with just four shots, and only one of them was on target.

The strong showing at the back was a welcome change from the drab first-half effort that set the tone for the U.S.’s stunning 2-0 qualifying loss to Los Chapines last week, and Cameron played a big part in Tuesday’s bounce-back game.

Shifted from right back to his preferred centerback spot for the rematch vs. Guatemala, the versatile veteran had a key role in the build-up to Clint Dempsey’s 12th-minute winner and netted on a header 10 minutes before halftime. Cameron was also stout in his positioning and individual battles, but just as important was his ability to serve as a leader to an unfamiliar back four that included DeAndre Yedlin, Steve Birnbaum, and Edgar Castillo.

“I’m trying to stay positive and encourage people, and help with my experience playing over in England and playing against these players,” said Cameron. “It’s different playing against these Central American guys, but I’ve been through the whole process of World Cup Qualifying before when I was a young kid. (Former U.S. players) Carlos Bocanegra and Steve Cherundolo and all those guys were there to kind of help me get experience and give me some exposure.

“Anyway I can (I will) do that to help these guys, because it’s a long road. You never know what’s going to happen, and if you can get guys experience and feel comfortable in these big games like this, it’s fantastic.”

U.S. head coach Jurgen Klinsmann pointed out Cameron’s contributions following Tuesday’s lopsided win by saying that the 30-year-old defender is growing “more and more in a leader role.” That is good news for the Americans, who have not had a de facto organizer at the back since Bocanegra fell out of the picture back in 2013.

Yes, the U.S. has had Matt Besler, Omar Gonzalez, John Brooks, and Cameron take turns leading the way since then, but the latter might be best-suited to be the defensive centerpiece. Cameron is the most experienced of that bunch with 39 caps to his name, and is also playing at arguably the highest level with Stoke City in the English Premier League.

His experience has shone through recently, as evidenced by the three international goals he has scored since last October, and it proved helpful in Tuesday’s shutout victory.

“He was kind of guiding me the whole time, talking to me, and he was great,” said centerback partner Birnbaum, who was playing in just his fourth game for the U.S. and first qualifier. “He had a great game tonight and was really solid and able to talk to me through the whole game.”

Cameron did not just guide the back line. He also made an impact on the offensive end, first by clipping a pass into the penalty area that resulted in Dempsey’s early winner and then by nodding home a Michael Bradley free kick in the 35th minute.

Dempsey’s decisive strike was the result of some good fortune because the ball smacked off Gyasi Zardes and into the path of the Seattle Sounders forward, but it was also the product of Cameron’s willingness to try and connect from deep.

“I just saw Gyasi making a good run and I just got the ball and I tried to nip it in behind,” said Cameron. “The two defenders read it, but that’s what happens. (Zardes) challenged the ball, it bounced out to Clint, and he put it in the back of the net. I think what’s one of my strengths, if I’m playing centerback, is you can hit those balls and kind of see things in front of you a little bit more.”

Cameron is seeing plenty of time at centerback at Stoke City these days, and that combined with his 90-minute shift vs. Guatemala will make a good case for him to remain at that position for the U.S. in the upcoming Copa America Centenario and remaining World Cup Qualifiers.

He is all for that as well. Not just because he prefers playing centrally, but because he is finding himself as more of a leader than ever before.

“It was great to get out there and obviously communicate, keep the line high, talking to guys in front of me, and just trying to make it organized to make our life easy and make the game easier for us,” said Cameron.