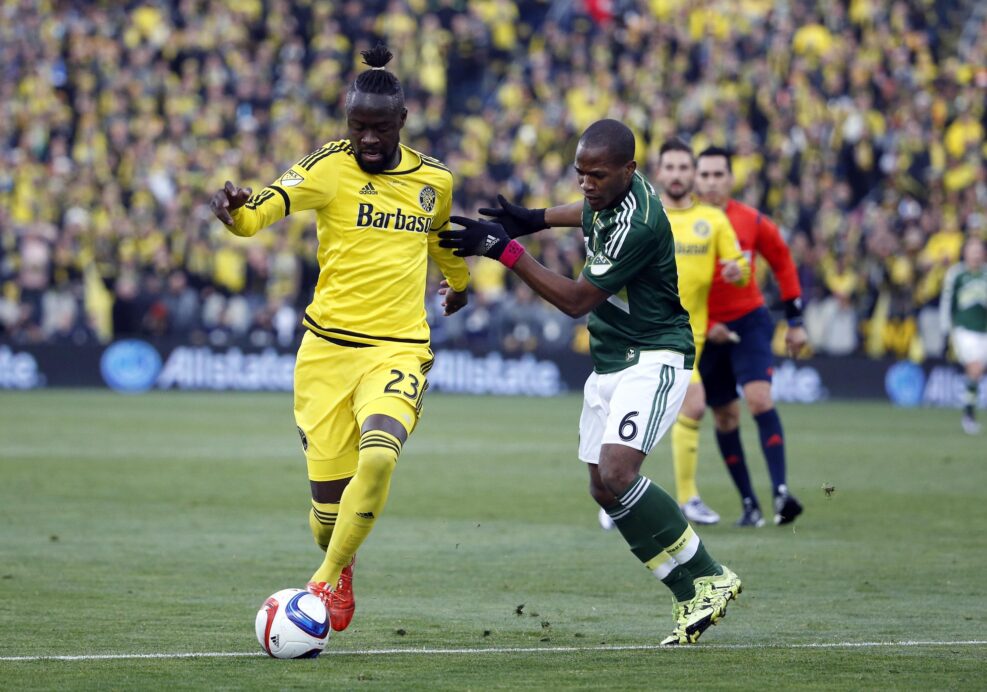 The 2016 MLS season is upon us, and Week 1 features a heavy slate of big-time matches to kickstart the season.

Headlining the proceedings is an MLS Cup rematch, as the Portland Timbers host the Columbus Crew after knocking off the Eastern Conference side at MAPFRE Stadium in December. Both teams return a core of their starting lineup, which should bring a bit of edge to the opening game of the teams’ respective MLS campaigns.

In the East, the New York Red Bulls open against a reloaded Toronto FC team, while Western Conference action will feature a clash of contenders when the Seattle Sounders take on Sporting Kansas City.

Elsewhere, the LA Galaxy host D.C. United, the Philadelphia Union visit FC Dallas, and the Vancouver Whitecaps face off with the Montreal Impact.

Last season’s Supporters’ Shield winners kick off the regular season against a team that shares the very same aspirations in 2016.

Following a rebuild that included the additions of MLS veterans like Drew Moor, Will Johnson and Steven Beitashour, Toronto FC returns with the deepest lineup in club history. The club’s first-ever postseason appearance ended a bit prematurely last season at the hands of the Montreal Impact, but Sebastian Giovinco, Michael Bradley and Jozy Altidore return in an attempt to lead Toronto FC towards the top of the Eastern Conference.

The New York Red Bulls occupied that very spot last season under the guidance of Jesse Marsch. Gone is Matt Miazga, while fellow centerback starter Damien Perinelle will miss a chunk of the season due to injury. In their stead, Gideon Baah, Ronald Zubar and Karl Ouimette battle it out for the starting spot. No matter who starts, the Red Bulls will be challenged by the talented attacking front of Toronto FC while Bradley Wright-Phillips looks to get going alongside Gonzalo Veron on the other end.

Both Orlando City and Real Salt Lake missed the playoffs in 2015, but both clubs will have renewed hope due to some big-name additions.

Following an expansion season that saw the club fall just short of the playoffs, Orlando City has added Italian star Antonio Nocerino to patrol the midfield. With Kevin Molino also set to return from last season’s injury, Orlando City should be a bit more dynamic this season while opening up space for Kaka and last year’s rookie sensation, Cyle Larin.

Real Salt Lake will benefit from the return of Yura Movsisyan, who netted 15 goals for the club between 2007-09 before leaving for Europe. Alongside Joao Plata, Juan Manuel ‘Burrito’ Martinez and Javier Morales, Movsisyan could prove to be the missing piece in an RSL attack that looks to be much better this season.

The Chicago Fire and New York City FC both disappointed in 2015, but regime changes have given new hope to the clubs ahead of their season-opening clash.

Frank Yallop and Jason Kreis have left, and in come Veljko Paunovic and Patrick Vieira. In Chicago, Paunovic has begun a fierce rebuild of the Fire roster, highlighted by the trade of Harry Shipp. Players like Gilberto, Kennedy Igboananike and David Accam will be expected to step up this season, while youngster Matt Polster looks to make the next step as one of the league’s brighter prospects.

NYCFC also moves into the season with a new look, but the same familiar faces headlining the team’s lineup. David Villa, Andrea Pirlo and Frank Lampard return, although the latter is set to miss out due to injury. Even still, Villa and co. should provide a challenge to a revamped Fire back line that lost one of its top players in Joevin Jones but added players like Johan Kappelhof, João Meira and Brandon Vincent.

The New England Revolution will be looking to move on without Jermaine Jones this season, and the first step in that will come at BBVA Compass Stadium.

Lee Nguyen leads a talented Revs attacking unit, while the addition of Gershon Koffie should help provide some cover in the midfield. For the Revs, consistency is key as the club looks to continue to build upon three straight postseason berths.

For the Dynamo, it’s about a return to that consistency. In 2015, club missed the postseason for just the third time since joining the league in 2006. To that aim, the Dynamo have added a talented playmaker in Cristian Maidana to line up behind Eric ‘Cubo’ Torres, who will look to return to his Chivas USA form after struggling down the stretch last season.

The San Jose Earthquakes fell just short of the postseason last year. The Colorado Rapids weren’t even close. However, both will be looking to start the season on a high at Avaya Stadium.

After finishing four points short in the playoff race, the Quakes looked to add pieces to bolster their roster. Simon Dawkins joins after several years in England, while midfielder Alberto Quintero joins on loan. Chad Barrett adds depth behind Chris Wondolowski, and Andres Imperiale adds to a Quakes back line that allowed just 39 goals last season.

The Rapids enter the season with rumors of Tim Howard swirling, but the club has already added several pieces to help get them out of the Western Conference cellar. Young pieces like Zach Pfeffer and Eric Miller add to the roster, while Marco Pappa adds some veteran leadership to a team that still faces an uphill climb out West.

FC Dallas emerged as one of the league’s most exciting teams in 2015, and Oscar Pareja’s side looks to continue that to start 2016.

Led by dynamic young stars like Fabian Castillo and Mauro Diaz, FC Dallas took the league by storm in 2015. Although the club fell just short of a Supporters’ Shield, FC Dallas took a leap into the league’s elite in a campaign that produced the best goal differential in the Western Conference. The team will expect more of the same this season as the club’s young talent continues to emerge alongside offseason additions like Carlos Gruezo, Maxi Urruti and Mauro Rosales.

Tasked with taking on FC Dallas to start the season are the Philadelphia Union. Earnie Stewart has begun the revamp of the club from the front office, but after giving up 55 goals last season, the Union will face a tall task in limiting FC Dallas’ attack so early in the season.

Just a few months after facing off in the MLS Cup final, the Portland Timbers and Columbus Crew collide again to start the season.

After emerging from MAPFRE Stadium with the club’s first MLS Cup crown, the Timbers enter 2016 with a target on their back. The club opted to add by bringing in the familiar, as the club relied on a series of MLS veterans to add depth to a roster that lost just two players from last season’s core lineup.

The Crew also opted to keep things consistent, returning all 11 starters. Although Justin Meram’s health remains up in the air, Kei Kamara enters the season ready to go fresh off of signing a new Designated Player deal. December’s MLS Cup finale was far from a  pretty affair, but two teams among the most talented and dynamic in the league will look to put on a show and assert themselves early in the new season.

The first all-Canadian clash in MLS will match two contenders right from the onset.

Both the Vancouver Whitecaps and Montreal Impact advanced to the postseason last year before falling in the conference semifinals. To start the season, the Impact will be at a major disadvantage as Didier Drogba is set to miss a majority of the first month to avoid playing on turf surfaces.

The Impact will have offseason addition Harry Shipp to help breakdown a Whitecaps defense that remains among the best of the league. Without Drogba, the Impact will face a tough task going against Kendall Waston and goalkeeper David Ousted, two players that will look to remain among the best in the league for another season.

The Seattle Sounders suffered a disappointing CONCACAF Champions League and will now look to bounce back against a fellow perennial contender.

Now working in a 4-3-3, the Sounders have a vastly different look than in years past. Jordan Morris enters while Obafemi Martins exits at the forward position. Nelson Valdez and Andreas Ivanschitz will look to have a bigger contribution this season, their first full year with the club.

Their opponents, Sporting KC, feature much of the same alongside some veteran additions. Justin Mapp and Brad Davis provide increased depth on the wings and valuable experience. The two new signings could allow Graham Zusi to feature centrally while aiding 2015 MVP candidate Benny Feilhaber in creating from the middle of the field.

Both clubs are coming off of CONCACAF Champions League eliminations, but the LA Galaxy and D.C. United will look to get off to a positive start in MLS play on Sunday night at the StubHub Center.

The Galaxy are coming off of a 4-0 thrashing at the hands of Santos Laguna. Despite starting a majority of their core, the Galaxy were run off the field. The club is still looking for offseason additions to gel into the team and MLS in general, as Nigel de Jong, Jelle van Damme and Ashley Cole are expected to help push the Galaxy back towards the top this season.

D.C. United looks to be on a bit of a downswing after losing a group of veteran leaders. Chris Pontius, Davy Arnaud and Perry Kitchen are gone, while the club has opted to bring in MLS veterans alongside promising youngster Luciano Acosta. Questions, once again, remain in the attack, where Fabian Espindola will have to carry a major load throughout the 2016 season.