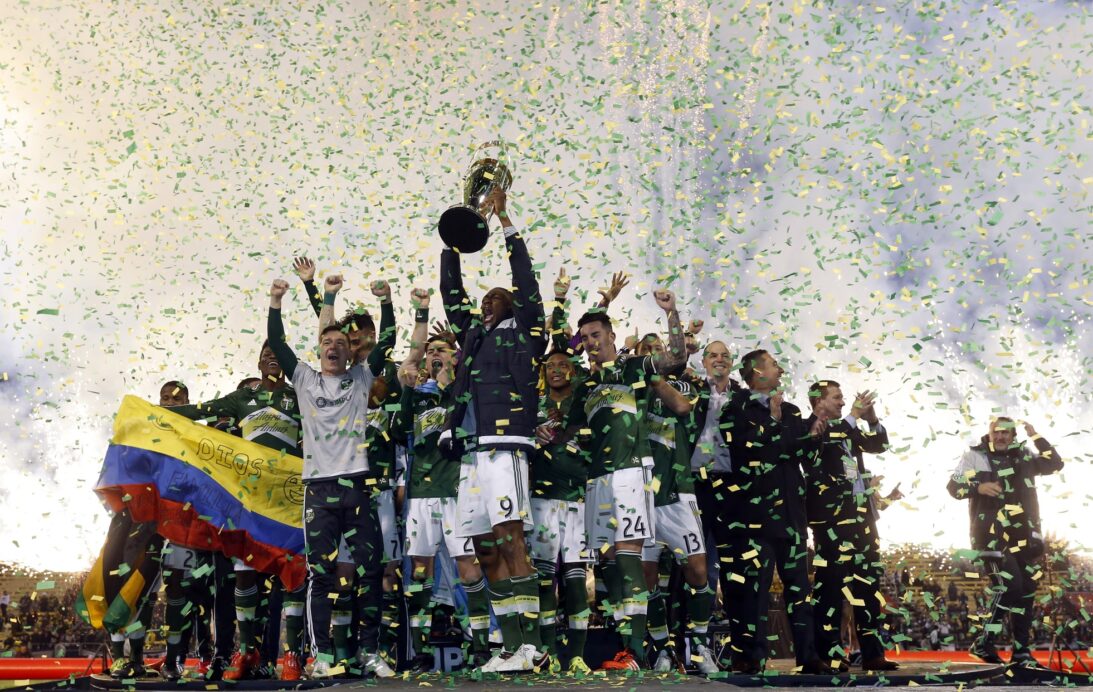 The offseason is over, and the push towards the 2016 MLS Cup is officially set to begin.

With a full slate of games set for Sunday, the new campaign is likely to begin in intense fashion as teams prepare to start their runs at this year’s title. The Portland Timbers currently sit atop the mountain after winning the 2015 crown, but there are plenty of contenders behind them looking to push toward the league’s ultimate prize.

The Western Conference has reloaded, as the LA Galaxy and Sporting Kansas City look to rebound with new-look rosters. Meanwhile, FC Dallas and the Vancouver Whitecaps aim to continue their ascendance atop the standings by riding their young but talented squads.

In the East, the Columbus Crew are keen to rebound from their MLS Cup Finals loss, while the Supporters’ Shield-winning New York Red Bulls expect more of themselves in 2016. Last year’s expansion sides, New York City FC and Orlando City, also want to improve on their inaugural campaigns after shaking things up a bit in the offseason. With stars like Sebastian Giovinco and Didier Drogba leading the way, Toronto FC and the Montreal Impact also appear set to make a considerable jump after reaching the postseason last year.

OUTLOOK– The reigning MLS Cup champions enter with the newly-minted target on their backs and very little questions. Only Rodney Wallace and Jorge Villafana have departed from December’s MLS Cup-winning lineup, while the Timbers have added a handful MLS-proven players, including Chris Klute, Zarek Valentin and Jack McInerney. The MLS Cup champions have every tool necessary to defend in 2016, but will face a difficult Western Conference throughout the process.
–————————-

OUTLOOK–  Following their MLS Cup Finals loss in December, the Columbus Crew have returned the team’s entire core in search of another run in 2016. Newly-recognized Designed Player Kei Kamara leads the attack alongside Ethan Finlay and Federico Higuain, while Harrison Afful and Gaston Sauro enter their first full MLS seasons after shining down the stretch last year.
————————-

OUTLOOK–  FC Dallas broke out as the league’s youngest and most dynamic team in 2015, and there’s no reason that shouldn’t continue in the new season. With stars like Fabian Castillo, Mauro Diaz and Matt Hedges leading the way, FC Dallas should be among the league’s contenders yet again after falling just short of a Supporters’ Shield in 2015.

OUTLOOK–  An offseason of turmoil was met with a Supporters’ Shield a year ago, as the New York Red Bulls took a surprising step forward under Jesse Marsch. The club’s nucleus returns for another season, as the Red Bulls spent the offseason adding young pieces to their established group. Questions remain over who will step in for Matt Miazga, but the Red Bulls expect to be fighting for even more silverware in 2016.
————————-

OUTLOOK–  Rookie sensation Jordan Morris will have some big shoes to fill. The highly-touted Stanford product joins the Seattle Sounders as Obafemi Martins leaves for the Chinese Super League. Clint Dempsey will once again lead the front line while looking to cement himself as a continued contributor to the U.S. Men’s National Team. Add in talented pieces like Nelson Valdez, Andreas Ivanschitz and offseason addition Joevin Jones, and the Sounders expect to compete for yet another Western Conference crown.
————————-

OUTLOOK– Following a premature postseason exit by club standards, the LA Galaxy enter the 2016 season with a much different look. Gone are MLS Cup winners Omar Gonzalez and Juninho, while Nigel de Jong, Ashley Cole and Jelle van Damme join several MLS veteran additions. Even with the new faces, the Galaxy will need several familiar ones to step up, as Giovani dos Santos, Robbie Keane and Steven Gerrard will need help over the course of the campaign.
————————-

OUTLOOK–  Following their first ever postseason appearances, Sebastian Giovinco and Toronto FC have plugged some of the team’s biggest holes heading into 2016. Will Johnson, Drew Moor and Steven Beitashour look to shore up the club’s defenses, while MLS veteran Clint Irwin steps into goal. Given the successes of last year and pieces added ahead of the new season, Toronto FC is in a position to fight towards the top of the East in 2016.
————————-

OUTLOOK–  After falling in the first round of the playoffs last season, Sporting KC has retooled with veteran leadership. Brad Davis and Justin Mapp join the club and add depth on the wings, while Lawrence Olum returns to Kansas City. With U.S. Men’s National Team veterans Matt Besler and Graham Zusi still helping Benny Feilhaber to lead the way, Sporting KC aims for a sixth straight postseason appearance.
————————-

OUTLOOK–  The Vancouver Whitecaps may have surprised some observers in 2015, but Carl Robinson’s side won’t be sneaking up on anyone this season. Led by a stout defense including Kendall Waston and goalkeeper David Ousted, the Whitecaps finished second in the West in the 2015 regular season. Following some additions to the attacking end, the club looks to push towards a deeper playoff run this year after being shutout by the Timbers last postseason.
————————-

OUTLOOK– The start of the 2015 season was full of excitement for the CONCACAF Champions League runners-up, but the Montreal Impact really got going following a major summer addition. Didier Drogba returns in 2016 after lighting up the league last year. Alongside him, Ignacio Piatti remains a solid playmaker, while centerback Laurent Ciman anchors a well-stocked defense. Add in offseason addition Harry Shipp, and the Impact have the potential to claim the East in 2016.

OUTLOOK– The Jermaine Jones era looks to have come to an end, but the New England Revolution still possess a talented and deep squad. Lee Nguyen continues to lead one of the league’s most versatile attacks, while offseason addition Gershon Koffie joins Scott Caldwell to hold down the midfield. Although the debut of Designated Player Xavier Kouassi is delayed, the Revs enter 2016 aiming for a bit more regular season consistency after enduring slumps each of the past two years
————————

OUTLOOK–  Orlando City’s first MLS campaign fell short of the playoffs, but the club has taken steps towards remedying that heading into 2016. In comes Italian midfielder Antonio Nocerino, who should free up Kaka to have more room to roam in the attacking end. Last year’s rookie sensation, Cyle Larin, will also look to fight against a sophomore slump, as the Canadian international looks to stay among the league’s best forwards by providing the goals for an Orlando City side hoping to break into the top half of the East.

OUTLOOK– The San Jose Earthquakes missed the postseason by a smidgen in 2015, and the club has made several additions to help further the push for the playoffs in an evolving Western Conference. Designated Player Simon Dawkins returns to the midfield after several years in England, while Chad Barrett provides welcome cover for Chris Wondolowski. With young prospects like Fatai Alashe, Marc Pelosi and Tommy Thompson still having room to grow, the Earthquakes are hoping a mix of veteran leadership and youthful talent can help them emerge this season.
————————-

OUTLOOK–  New York City FC’s inaugural season was not without struggles. Frank Lampard’s absence during the first half of the year was notable, while the lineup that was active struggled to come together as a group. The failures of the 2015 season cost Jason Kreis his job, and new head coach Patrick Vieira enters his first season in MLS. With David Villa, Andrea Pirlo and Lampard leading the way, NYCFC has a chance, but the club will need to jel much better in 2016 if the team hopes to find itself playing into the colder months.
————————-

OUTLOOK– Owen Coyle’s first season in charge of an MLS club wasn’t all bad, but the former Premier League manager knows things could be better after missing the postseason. In comes Cristian Maidana, one of the league’s premier playmakers. With Maidana leading the way, the Dynamo will look to Erick ‘Cubo’ Torres to step up among the group’s familiar faces. If Torres can get going, the Dynamo will have an explosive striker to go with a team that has the chance to be better in 2016.
————————-

OUTLOOK– The return of Yura Movsisyan signals Real Salt Lake’s biggest capture ahead of the 2016 season. The Armenian striker provides the club with good firepower up front, and Movsisyan can partner with 2015 addition Juan Manuel ‘Burrito’ Martinez in a solid frontline. The club will now hope to bounce back from an uncharacteristic down year after missing the playoffs for the first time since 2007 last season.

OUTLOOK– The 2015 season was a tough one for the Philadelphia Union, which saw the club’s only chance at glory snatched from them in the U.S. Open Cup Final. The club has made a number of additions, including adding Chris Pontius, Ilsinho and top draft picks Josh Yaro and Keegan Rosenberry. Still, the Union face an uphill climb to push the conference’s top sides.
———————–

OUTLOOK–  D.C. United remained among the list of Eastern Conference contenders in 2015, but failed to once again get over the hump and into the conference’s elite. The club faces a bit of change following the departures of Perry Kitchen and Chris Pontius, as well as the absence of the injured Bill Hamid, but Ben Olsen’s side will once again rely on its defensive unit to keep the club going in 2016. Questions remain in the attack, where Fabian Espindola and offseason signing Luciano Acosta will have to do some heavy lifting to keep D.C. United afloat.
————————-

OUTLOOK– The 2015 season couldn’t have gone much worse for the Chicago Fire. The club finished bottom of the table in the East and rarely looked like competing. A regime change has highlighted the offseason, with Nelson Rodriguez and head coach Veljko Paunovic stepping in to rebuild the club. The duo is entering a long-term process, but the Fire hope to see some signs of growth with a revamped roster this season.
————————-

OUTLOOK– The Colorado Rapids weren’t always bad last season, but they were never really good. The Rapids led the league in draws in 2015 in slumping to the bottom of the West. Offseason additions Marco Pappa, Eric Miller and Zach Pfeffer appear to plug some holes while the potential signing of Tim Howard looms large for a team in need of plenty of help.
————————-