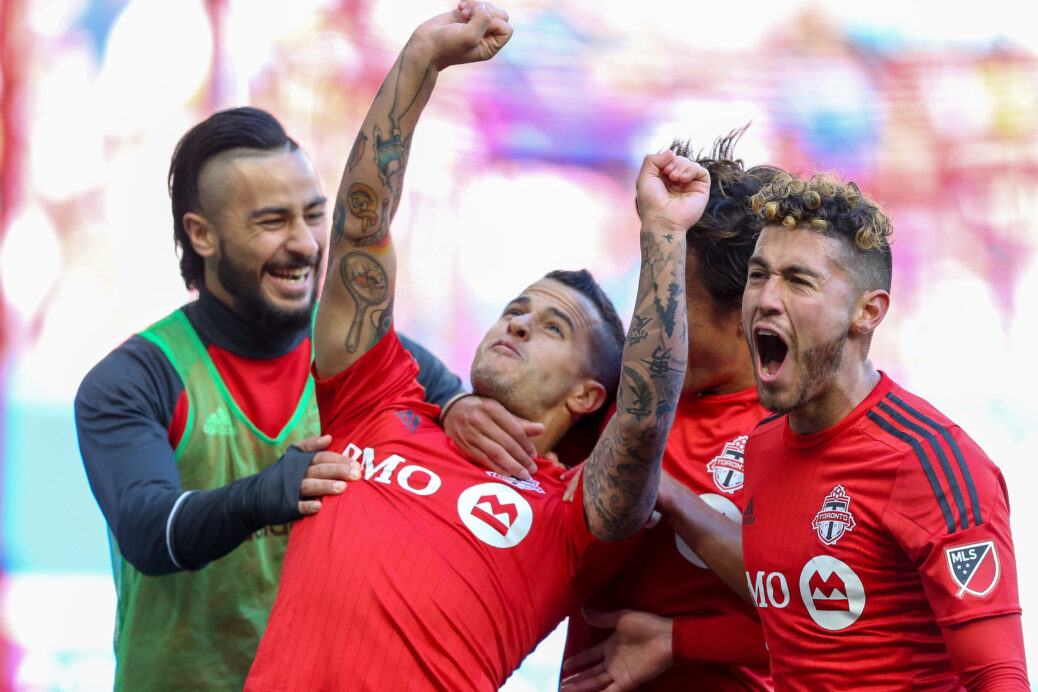 HARRISON, N.J. — Toronto FC may not have won many points in terms of style, but picked up three where it mattered most.

Toronto FC got its 2016 season off to a winning start on Sunday afternoon, as the Canadian club combined a gritty defensive performance with a pair of second-half goals to pick up a 2-0 road win over the New York Red Bulls. The victory was a historic first at Red Bull Arena for Toronto FC, but more importantly gave Gregg Vanney’s side a good foundation from which to start a year filled with expectations.

“Not everything was perfect nor is it on Day 1, but the guys competed, they competed for 90 minutes, they covered each other, they scrapped things out, made plays when they needed to make plays defensively,” said Vanney. “We start (with) eight games on the road and we talked about giving ourselves a chance to win games. A lot of that for today was some good, strong, hard defensive work, and we did that and in the end we gave ourself a chance to win and we did.”

Sunday’s outing certainly was far from pretty, but plenty effective. Toronto FC stayed organized and compact from the onset, and the Red Bulls had difficulty dealing with that. The hosts eventually found more of an attacking rhythm, more notably after halftime, but still were never able to create a clean look in front of the goal. The closest they came was in the 65th minute, but even that only yielded a shot from Mike Grella that hit side-netting.

The effort, mentality, and commitment that Toronto FC displayed en route to recording a shutout was a welcoming sight for the club, especially after spending much of the offseason retooling a back line that was the club’s Achilles’ heel in 2015.

“It’s important,” said Toronto FC captain Michael Bradley of posting a cleansheet. “One of the things that we’ve talked a lot about is how defensively we have to be better. We have to be able to win games not giving away any goals. For Week 1, to get a big win on the road against a good team and to not give away any goals, it’s a good step for us.”

As good as the defense was, Toronto FC’s attack struggled. Missing injured forward Jozy Altidore, the Reds used Sebastian Giovinco as the spear of the three-man front line with little success in the first half. Giovinco was held largely in check by MLS newcomer and Red Bulls centerback Gideon Baah, and wide players Tsubasa Endoh and Daniel Lovitz also failed to provide much of a threat.

Nonetheless, Toronto FC went into halftime pleased. The club may have wanted more on the offensive end, but was still in a position to nab three points on the road despite not playing up to its very best.

“We want to give ourselves a chance to win games in the second half,” midfielder Will Johnson told SBI. “We want to come (into the locker room) even or ahead, and that’s what we did. We knew that as the game went on, they’d potentially push numbers.”

Toronto FC’s gameplan worked well, as the Red Bulls began to throw players forward in the second stanza in an effort to try and break the deadlock. With more space in behind to exploit, Toronto FC proved more dangerous on the counterattack, which ultimately led to the 81st-minute penalty kick that was earned by rookie Tsubasa Endoh and finished by reigning MLS MVP Sebastian Giovinco.

Wanting to salvage a result, the Red Bulls became even more aggressive after that, but were punished once again in the first minute of stoppage time. Giovinco sprung substitute Marco Delgado on a 2-on-2 play in transition, and Delgado slotted a shot low and to the left to seal the deal and give Toronto FC a season-opening win.

One that was made possible by the strong display at the back.

“You’re not going to win if you have a leaky defense, so that’s been our focus,” said Johnson. “It feels good, but this is one of 34 games. We have to continue to strive to get shutouts every week no matter where we play.”