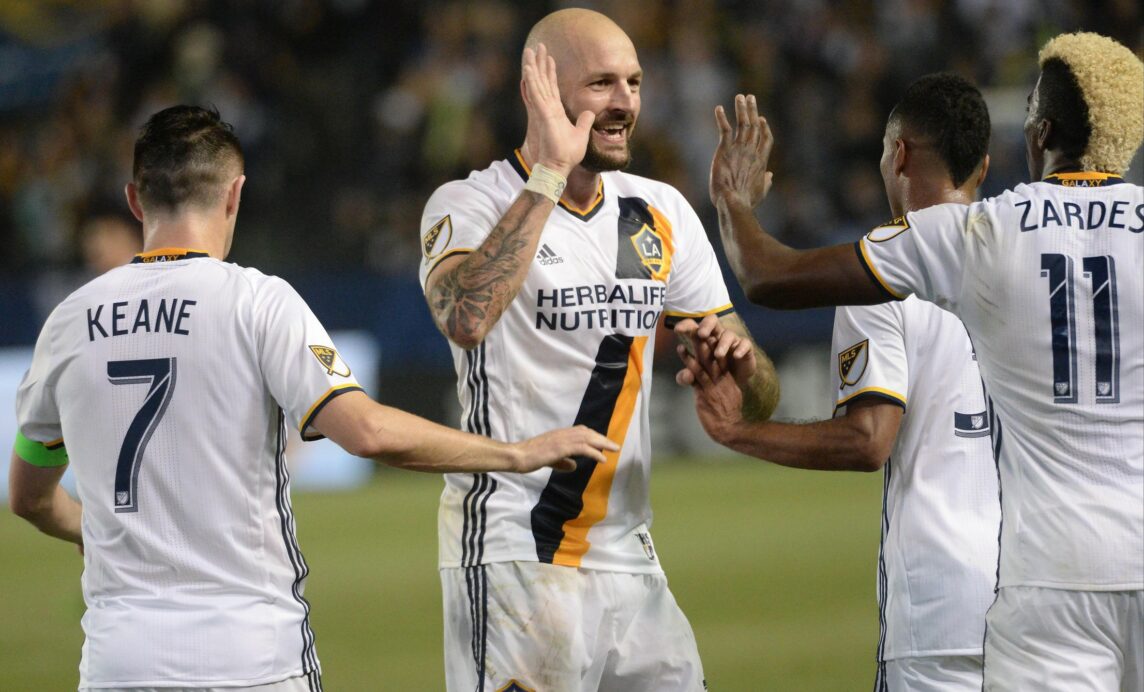 On a night that saw goals from LA Galaxy stalwarts Gyasi Zardes and Robbie Keane, it was a centerback who earned the most praise from his teammates in the locker room afterward.

Jelle Van Damme had a hand in two of the Galaxy’s three goals against the San Jose Earthquakes, winning a header to assist the first and launching the long ball that sprung the second. For a defender, that’s a solid night’s work. Yet, in his postgame interview, Van Damme spent more time talking about his mistakes than anything he did right.

His teammates, however, heaped on the praise.

“He’s a great force on the pitch,” said midfielder Nigel de Jong after the game. “The way how he plays, the long balls and the accuracy from the balls that he’s hitting, is just phenomenal.”

“He’s an aerial threat, and once you see him strike a ball with his left foot you know he’s clinical,” said Gyasi Zardes. “He can find our wingers and he can find forwards, and I think that’s a key thing for a defender.”

Mike Magee was most direct: “Tonight, he was the difference in the game.”

Van Damme joined the Galaxy in the offseason, part of a trio of experienced players the club imported from Europe. Along with the culture shock of moving from Belgium to Los Angeles, Van Damme also had to adjust to a new position, making the switch from left back to center.

Between Quincy Amarikwa and Chris Wondolowski, the Earthquakes’ offense put Van Damme to the test. Amarikwa, in particular, battled him throughout the night, but it was right back Marvel Wynne who finally caught Van Damme out of position in the play that netted the Earthquakes’ only goal.

The play started as an intercepted cross, from which the visitors quickly launched a counterattack. Van Damme found himself on the wrong side of Wynne, scrambling to catch up. He made a last-ditch effort at a slide tackle, but missed the ball, giving the Earthquakes the opening they needed.

“I think we had a few things that went wrong,” said Van Damme, recalling the goal. “But at the end, I always look at myself, and I’m critical enough to say that I didn’t do good enough. If I go down I have to be 100 percent sure that I have the ball, or I have to stay on my feet and just run with him.”

It was a rare error on an otherwise impressive night. The California Clasico provided a perfect showcase for Van Damme’s highly physical play, as he muscled players off the ball on both ends of the field. Although he drew a yellow card early in the game, Van Damme is far from apologetic for his style.

“I’m a pretty aggressive player,” Van Damme said postgame. “I try to always be (aggressive) in a correct way. Try to not (go) past the limit.”

“Oh, he’s a beast,” agreed Magee. “He’s a handful. He wants to score goals, he wants to get on the end of things and throw his body at plays he probably shouldn’t.”

Van Damme’s tendency to throw himself into the fray nabbed the Galaxy their first goal against the Earthquakes. When Mike Magee sent a free kick across the visitors’ penalty box, Van Damme shoved through the crowd to get his head on the ball. He knocked it down to perfectly tee up Gyasi Zardes’ shot.

“I think when you see big dudes like that, all tatted up and bald heads, you kind of assume they’re going to be a donkey,” said Magee, drawing a laugh from Van Damme across the locker room.

“But he’s the opposite. He’s clever, he’s got good vision, he can run with the ball, and obviously he does the dirty work as well.”