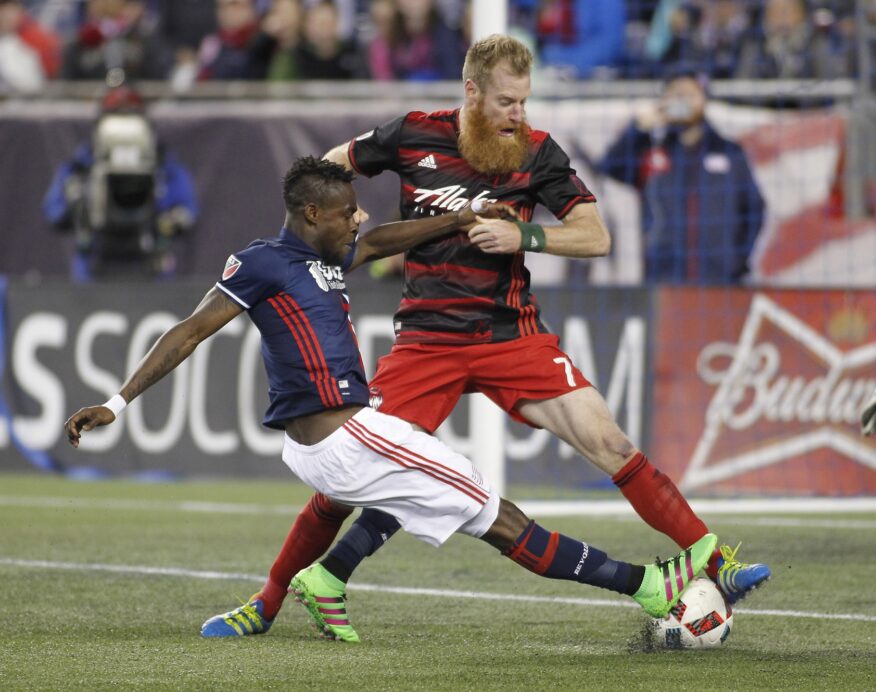 Playing the second of three games in nine days, and 3,000 miles away from home, the Portland Timbers were moments away from securing a scrappy three points. However, a self-inflicted finish forced the reigning MLS Cup champions to settle for a mere  tie.

The New England Revolution — who are also in the midst of a hectic three-game week — were able to salvage the draw on an 89th-minute own goal by the Timbers’ Jermaine Taylor. The late goal leveled the scoreline at 1-1, canceling out a 64th minute goal from substitute Jack Barmby.

Another substitute, Revolution rookie Femi Hollinger-Janzen, thought he had his first MLS goal after Je-Vaughn Watson saved it off the right end line to send it in front of goal as the hosts pushed forward late. Hollinger-Janzen looked to get a piece of the ball, but it was Taylor’s touch that sent the game to a deadlock.

The game included a total of four shots on goal, but none in the first half.

“We’re playing well through the middle third,” Revs coach Jay Heaps said. “Then the final third was just a little bit off where we were trying to do too much.”

The Englishman Barmby was a bit fortunate on his first MLS goal, getting a nice right side cross from Darlington Nagbe and then scoring on a high bouncer that bamboozled Watson and goalie Bobby Shuttleworth.

“He took the goal pretty well,” Porter said. “It was a little bit lucky, but he was in the right spot and the overall technique was pretty good on the play.”

Portland was noticeably missing Designated Players Diego Valeri (suspension) and Liam Ridgewell, although Nagbe made his return from an ankle sprain.

The Revolution sat Chris Tierney and Scott Caldwell, while Charlie Davies had to exit the game in the 32nd minute with a groin strain. Juan Agudelo replaced him to make his first appearance in four weeks after a hamstring injury.

New England will return to action on Saturday back at home against Orlando City in a rematch of a heated 2-2 draw down at the Citrus Bowl two weeks ago. Portland will have one additional day off, hosting Toronto FC on Sunday.

With the amount of good fortune that went into Barmby’s goal, the Timbers defense, and especially center back Nat Borchers have to get credit for keeping the Revs offense at bay most of the game. Borchers’ back line limited New England to just two shots on goal and helped the shorthanded Timbers grab a point.

Heaps said the Revs were shooting for three points, but he’ll have to feel alright about pocketing their league-leading sixth draw after some late disruptive play from Femi Hollinger-Janzen, who caused just enough trouble in the box on the 89th-minute own goal to keep Taylor and goalie Jake Gleeson off balance.

Bobby Shuttleworth did poorly on Barmby’s goal, and with the Revs offense struggling he couldn’t afford to give up a soft goal — literally, it was a pretty soft shot. New England’s defense has generally limited the opposition lately, but Shuttleworth has given up seven goal on 15 shots on target over the past four games.