Crew hold off NYCFC to record first win of 2016 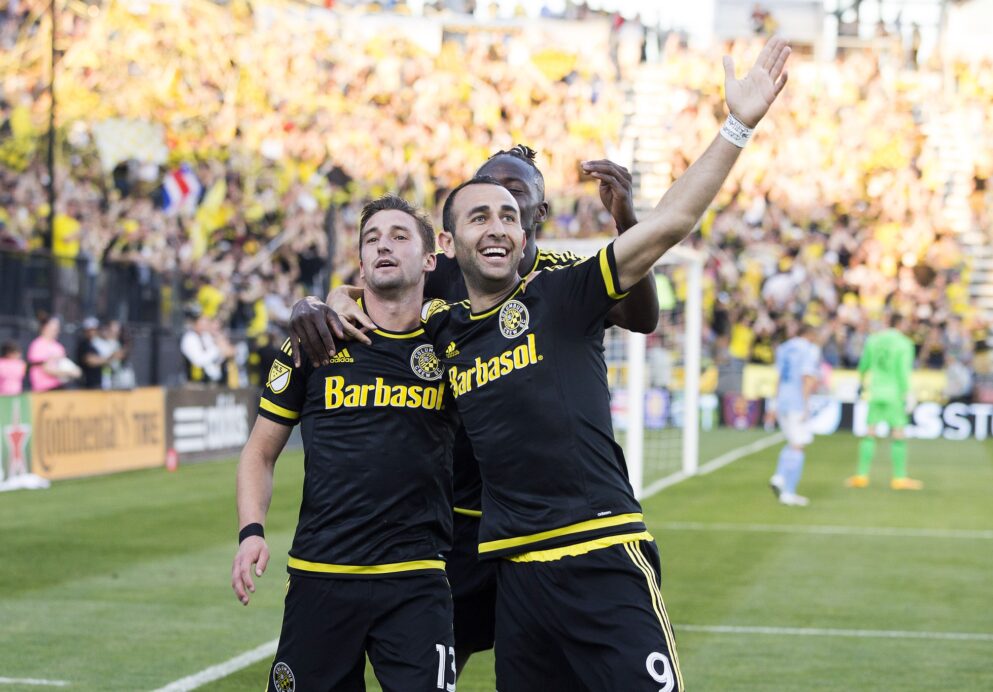 Three goals, including one from Kei Kamara, and some late-game heroics from Steve Clark saw the Columbus Crew earn their first win of the season on Saturday.

Justin Meram scored the go-ahead goal in the 80th minute, but the Crew had to hold onto the lead with only 10 men after Michael Parkhurst was shown a red card late. David Villa scored two goals, but that wasn’t enough to stop the Crew from recording a 3-2 win at MAPFRE Stadium.

Meram was instrumental for the Crew all game long. Minutes into the second half, he weaved past a few NYCFC defenders in the midfield before picking out a wide-open Kamara on the right. The forward, who had already attempted multiple shots on the evening, finally put one past Josh Saunders.

After heading in a cross by Andoni Iraola earlier in match, Villa scored his second of the game from the penalty spot. Ted Unkel called for the penalty after Kwadwo Poku went down from a challenge by Tyson Wahl. Intriguingly, Unkel sent off Parkhurst before the penalty was taken.

Patrick Mullins nearly tied the score at 3-3 in second-half stoppage time, but Clark came up big on the goal line to secure all three points.

NYCFC will next travel to Talon Energy Stadium to face the Philadelphia Union on April 23. The Crew will stay home and host the Houston Dynamo that same day.

Ethan Finlay turned in a strong shift, scoring once and assisting once, but Justin Meram had a hand in every goal scored by the Crew on Saturday. After setting up his team’s first two goals, Meram scored a goal of his own in the 80th minute.

All three of the Crew’s goals against NYCFC were crucial, but Steve Clark’s save on the goal line in the 92nd minute is the play that every Crew supporter will be talking about for the next week as they celebrate their first win of the season.

Steven Mendoza did not look comfortable playing on the left wing for NYCFC. The 23-year-old Colombian rarely saw the ball, and when he did, he only completed 69 percent of his passes.