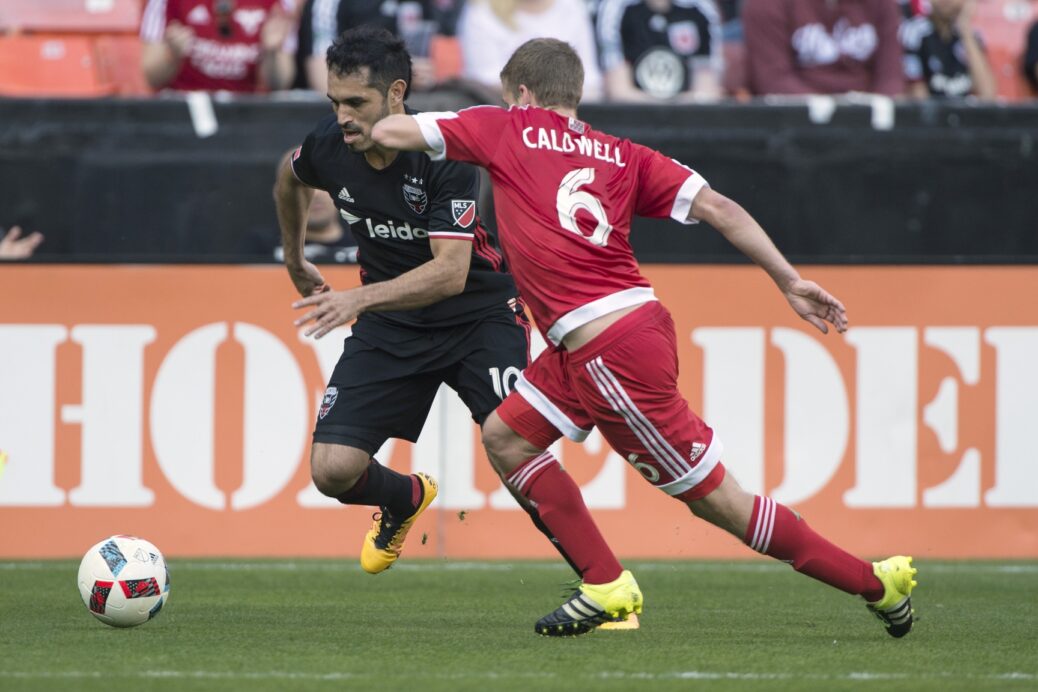 WASHINGTON — A win is a win, but for D.C. United, it may have come with a high cost.

Playmaker Fabian Espindola appeared to injure his hamstring early in D.C. United’s 3-0 victory over the New England Revolution on Saturday afternoon in the nation’s capital. Neither team looked dangerous in attack, with Lamar Neagle’s 33rd-minute penalty proving to be the difference in the cagey encounter before Luciano Acosta’s impressive chip and Alvaro Saborio’s goal at the end of the game.

The Revolution started the game strong, and had a couple of half-chances within the first ten minutes, including a blast by Teal Bunbury which beat D.C. United goalkeeper Travis Worra, but struck the crossbar and went out of play.

D.C. United took the lead in the 33rd minute after Marcelo Sarvas was clipped at the edge of the box by Je-Vaughn Watson. Referee Alan Kelly quickly pointed to the spot, and Neagle sent Bobby Shuttleworth the wrong way on the ensuing penalty for his 2nd goal of the season.

Both teams lost key players to apparent hamstring injuries as the first half wore on. Revolution defender Chris Tierney came off after a challenge in the 29th minute, and Espindola injured himself attempting a shot from 40 yards out.

The second half saw the Revolution push forward for an equalizer, but D.C. United had little trouble keeping the ball safely away from its area. A potentially dangerous spill by Worra in the 80th minute almost gave the ball to Diego Fagundez for an easy goal, but Worra did well to recover just in time.

As the game wore down, substitute Acosta found himself in a one-on-two opportunity against the Revolution defense. Rather than hold the ball up, Acosta chipped it over the defense — and Shuttleworth — and into the net from 20 yards out.

Minutes later, Saborio finished the game off with a one-on-one counter-attacking score.

D.C. United were led by assistant coach Chad Ashton, as it was without the services of head coach Ben Olsen, who was suspended for the match by MLS after stepping onto the field of play to remove a stray second ball. Olsen called the suspension “absurd,” and watched Saturday’s match from the stands.

Both D.C. United and Revolution entered Saturday’s game looking for a win to kickstart their fledgling seasons. D.C. United failed to capitalize on their first win of the season on March 9 against Vancouver, losing a week later to Toronto FC.

Next weekend, D.C. United will travel to Chicago to take on the Fire, while the Revolution will return home to welcome the Portland Timbers on Wednesday.

In a game of so little attacking prowess (until D.C. United’s explosion as the game ended), Marcelo Sarvas’ ability to coax a foul in the box is all it took for the honor.

Neither team could get much going all night, so when Marcelo Sarvas went down at the edge of the box in the 33rd minute, the penalty decision by referee Alan Kelly was always going to be huge.

Diego Fagundez was marked well by D.C. United’s defense all afternoon, and made very little impact on the game.