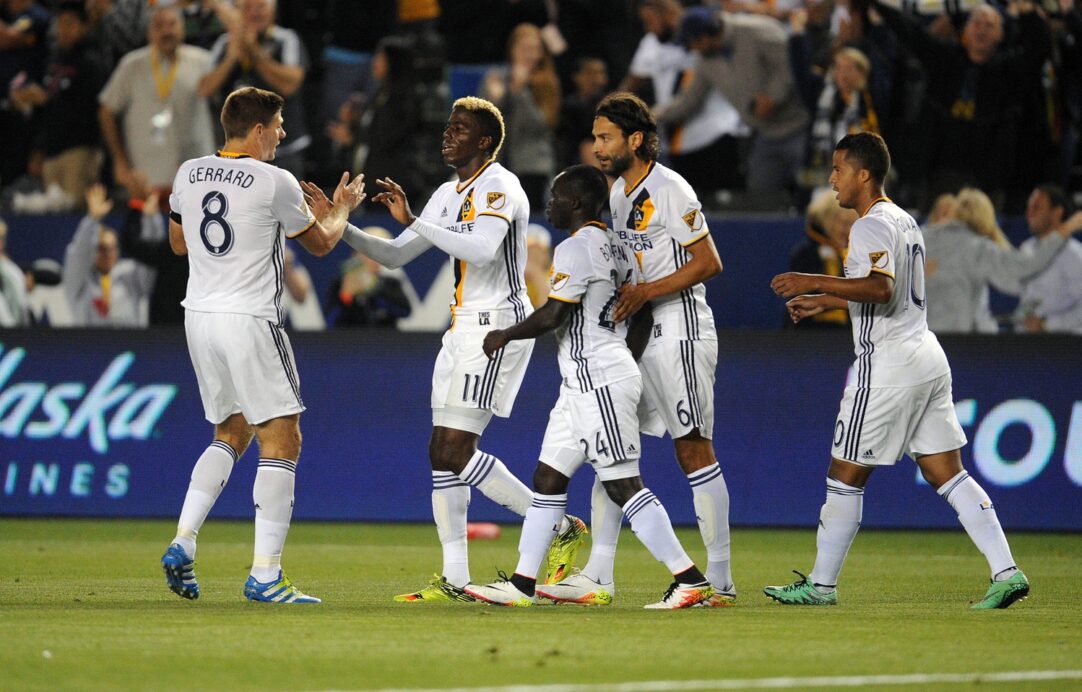 Carson, Calif. – The Western Conference showdown between the LA Galaxy and Real Salt Lake may have been missing a few stars, but it did not lack for fireworks.

Despite the absence of offensive weapons Robbie Keane and Joao Plata, the two sides produced five goals in the first half alone, and it could easily have been more, as Steven Gerrard missed a penalty kick to keep the score from getting completely out of hand.

The Galaxy ended Real Salt Lake’s season-long winning streak in emphatic fashion, crushing the no longer undefeated side, 5-2, before a sold out crowd of 27,000 on a cool night at the Stub Hub Center.

Unfortunately for RSL, only one of those five first half goals belonged to them.  Juan Manuel Martinez climbed over diminutive Galaxy defender AJ de la Garza to head home the opening goal off a long cross from Luke Mulholland, temporarily quieting the boisterous crowd.

The floodgates opened shortly thereafter. Gyasi Zardes answered in the 19th minute with a lightening strike goal from the edge of the area, beating the flat-footed Rimando to the upper 90.

Mike Magee gave the Galaxy the lead in the 26th minute when he converted an Emmanuel Boateng cross with a left footed ball past a diving Rimando.  Boateng had done well on the play, showing off his vaunted pace as he beat Tony Beltran around the left corner before whipping in the cross.

Boating’s impact only grew on the night.  He extended the Galaxy lead in the 41st minute when he raced into the area and poked home a loose ball into the corner netting to open his Galaxy account and net his first MLS goal.

The goal of the night, however, certainly belonged to Giovani Dos Santos, who corralled a toe-poked pass off from Boateng, and, streaking across the top of the area, chipped a shot back over the head of the sprawling Rimando.

Real Salt Lake pulled one back midway through the second half when Javier Morales, who subbed on to start the second half, converted a penalty kick to narrow the Galaxy lead.

Steven Gerrard put the final nail in the coffin when he decleated Jamison Olave with a gorgeous bit of skill and tucked a ball underneath Rimando to end the scoring and open his account on the season.

Real Salt Lake will head home to lick their wounds, patch up their defense, and take on the struggling Houston Dynamo at Rio Tinto on Saturday, April 30th.

The Galaxy now climb into 3rd place in the Western Conference after scoring nine goals in their last two games.  They will head out on the road to face Sporting KC on Sunday, May 1st.

While some of the Galaxy’s biggest stars etched their name on the scoresheet, Emmanuel Boateng stood out in a major way. The 22-year-old provided a goal and two assists to open his MLS account in what was by far his best performance in a Galaxy uniform.

With his side up 3-1, Giovani dos Santos all but locked up the Galaxy win with an audacious chip over Nick Rimando. The Goal of the Week contender was the high point of a statement Galaxy win that featured another goal from their in-form Mexican star.

Matched up against Boateng, Tony Beltran had trouble defensively throughout Saturday’s contest. Add in the penalty kick conceded, and Saturday’s effort will not be one to remember for two-time MLS All-Star