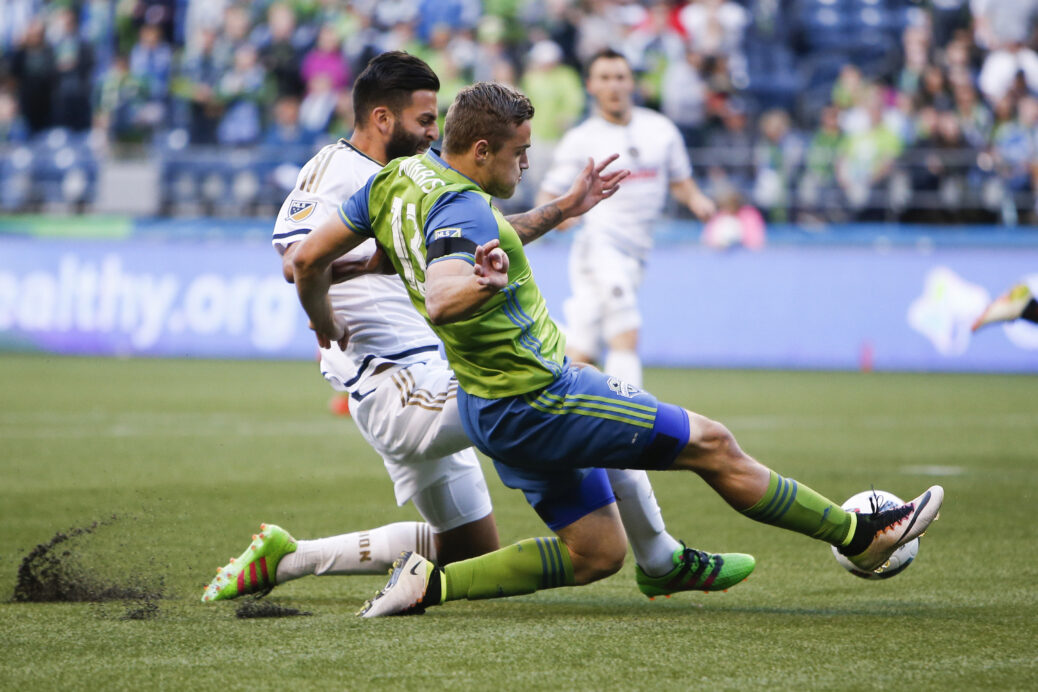 SEATTLE– Jordan Morris scored the first goal of his MLS career and defender Chad Marshall netted for the second time in two weeks to give the Seattle Sounders a 2-1 win over the Philadelphia Union in front of 39,620 at CenturyLink Field on Saturday night.

Morris provided what turned out to be a necessary insurance goal against the 10-man Union in the 71st minute, tracking down a laced through ball from Andreas Ivanschitz and poking a shot past goalkeeper Andre Blake for the 2-0 lead. It was the second assist of the night for Ivanschitz, and his third of the young season.

Former Sounder Sebastien Le Toux pulled a goal back moments later, getting on the end of a C.J. Sapong header and easily beating goalkeeper Stefan Frei from close range. Le Toux injured himself on the play and was immediately subbed out.

Despite cutting the deficit in half, the shorthanded Union (3-3-0, 9 points) never seriously threatened again.

Philadelphia went down a man when referee Drew Fischer handed Roland Alberg his second yellow card of the night in the 53rd minute. Both cards were issued for rash tackles on Sounders midfielder Cristian Roldan.

The Sounders (2-3-1, 7 points) opened the scoring in the 41st minute, with Marshall rising unencumbered to powerfully head an Ivanschitz corner kick past Blake for the 1-0 lead. Ivanschitz nearly doubled the lead barely two minutes later, forcing Blake into a fingertip save with a ripped one-touch shot from 12 yards out.

The upstart Union opened the match on the front foot, controlling possession and repeatedly dumping in crosses from the right side. A mountain of possession never amounted to much, however, with Sapong sending the visitors’ best early chance well over the crossbar in the 11th minute. Despite conceding so much of the game early, Seattle closed down space around the edge of the penalty area as quickly as it has all season.

Looking forward, both teams are back in action next weekend. The Sounders visit the Colorado Rapids (3-2-1, 10 points), while the Union host New York City FC (1-2-3, 6 points).

Chad Marshall. With a season threatening to run off the rails, the veteran defender delivered two crucial goals in two weeks. His thundering header on Saturday seemed to infuse his team with a bit of swagger that has been missing for much of 2016. Six games in, Marshall is somehow the club’s leading scorer.

The first career goal for young Jordan Morris. Pressure had been mounting on the rookie as he went five straight games without a goal or assist while Seattle’s attack sputtered out of the gate. He appeared increasingly tense over the last few weeks and looked visibly relieved after opening his professional account.

Roland Alberg. While the Union were already trailing 1-0, a road point seemed plausible for the visitors until Alberg’s second rough challenge of the evening provided Seattle a man-advantage and changed the tenor of the match. The second yellow might have been soft, but Alberg should never have left his feet and forced Fischer to make a judgment call.