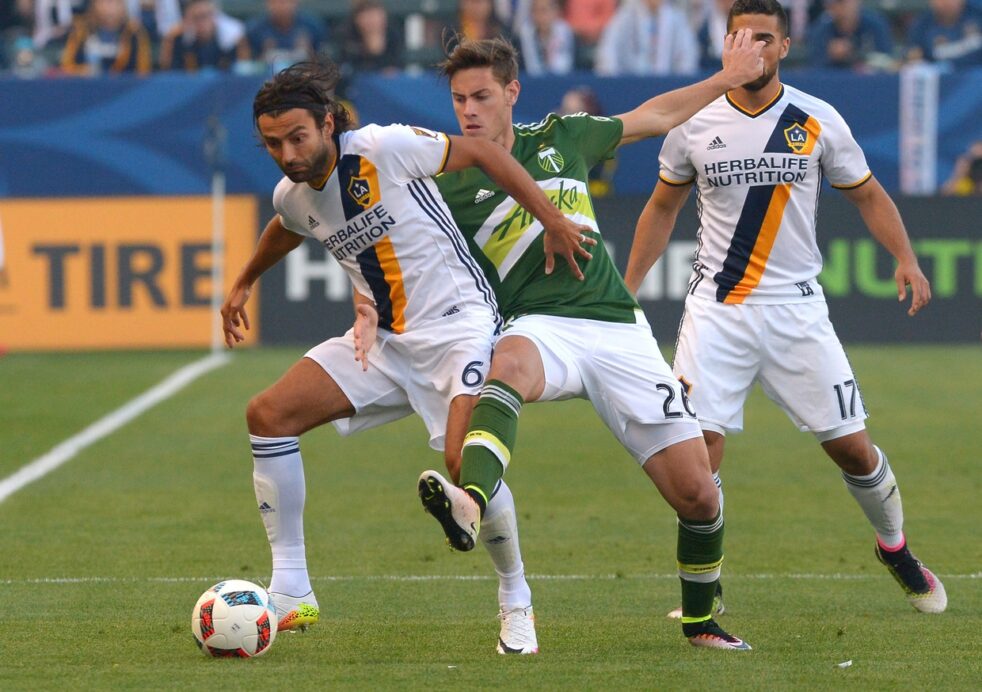 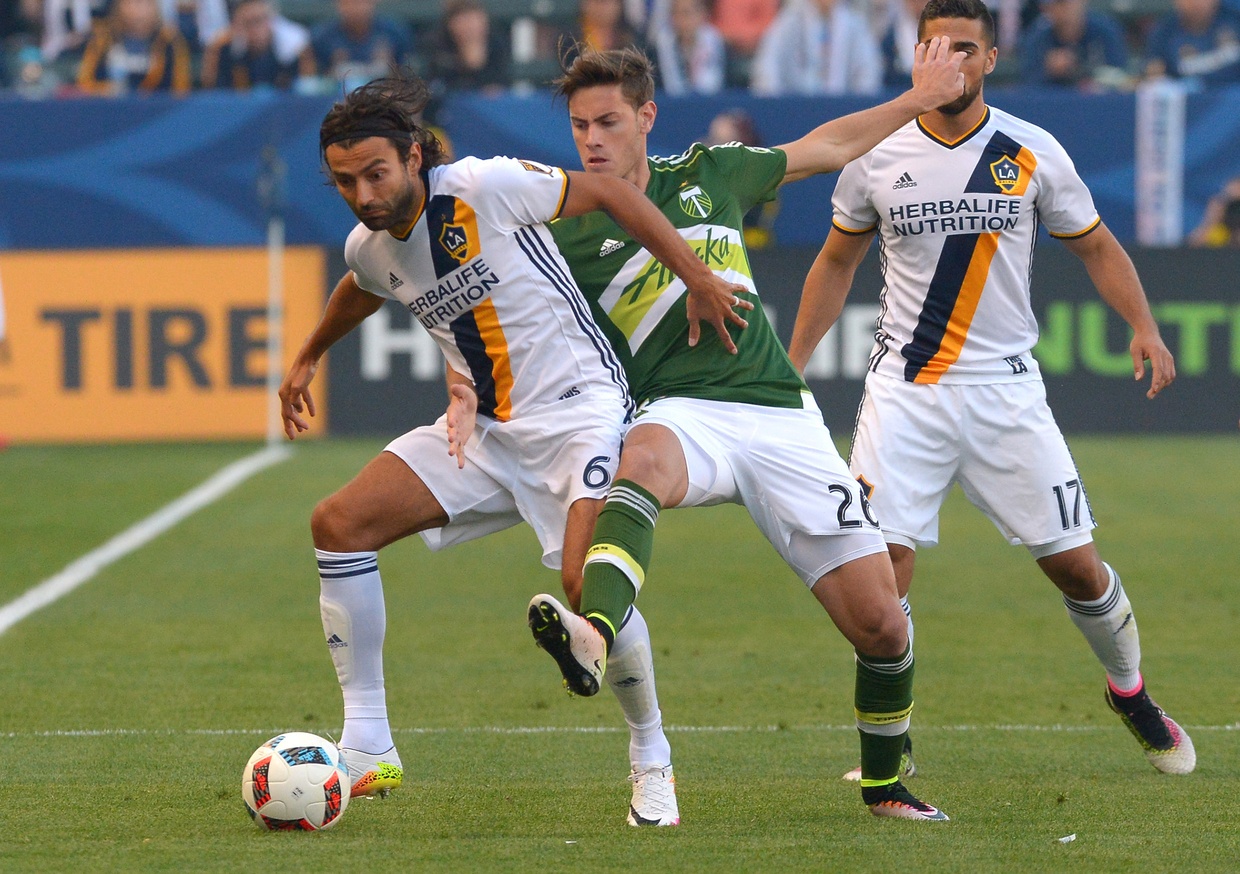 CARSON, Calif. – The LA Galaxy and the Portland Timbers hold the last two MLS Cup trophies, and on Sunday the two sides split the honors, with the match finishing on even terms, 1-1, before 25,667 fans on a cool night at the Stub Hub Center.

Fanendo Adi netted in the 52nd minute to give the Timbers the advantage, beating emergency fullback Rafael Garcia, and goalkeeper Brian Rowe, with a well struck shot from 15 yards low to the far post.  Garcia, normally a central midfielder, was called into play when right back Robbie Rogers went down with an injury in the 6th minute.  Head coach Bruce Arena did not have another fullback in his 18 man roster, and was forced to use Garcia.

The Timbers appeared on the verge of taking all three points on the road, but the persistent Galaxy attack finally paid dividends, as Sebastian Lletget’s cross was headed back by a diving Nat Borchers for an own goal to tie the score at in the 84th minute.

The Galaxy were without captain and leading goal scorer Robbie Keane, who suffered a knee injury last week while on international duty with Ireland, and is out an estimated 4-6 weeks after undergoing exploratory surgery. The LA attack suffered without the presence – and finishing skills – of Keane.

The offense was left at the feet of Gyasi Zardes and Gio Dos Santos. Along with Mike Magee, the Galaxy generated ample chances, out-shooting the Timbers on the night, 13-4.  Dos Santos seemed to tire in the second half, and was subbed off for Bradford Jamieson IV in the 63rd minute.

The game was marred late when Nigel De Jong went late into a tackle on Darlington Nagbe and came down hard on the diminutive midfielder’s ankle.  Nagbe had to be stretchered off, and was taken to the locker room after the match in a wheelchair.

Despite the own goal, and the possible loss of Nagbe, Sunday’s draw was a good result for the Timbers. They took advantage of their few chances and frustrated the Galaxy all night long. Porter went with an unfamiliar 4-2-3-1 to try to deal with the Galaxy’s fondness for overlapping attackers in the final third.  Playing two holding midfielders closed off multiple Galaxy through balls, and it helped that at the other end of the pitch, Fenando Adi turned in a muscular performance taking on Galaxy defenders 1 v 1 all night long.

The Galaxy, on the other hand, will have to wonder where their offense will come from, as they appeared to lack the finishing skills needed without the presence of Keane.

More importantly, the Galaxy have to wonder who will actually play in their 18 man roster on Friday in Houston.  More than any other team in the MLS, the Galaxy are suffering a horrid early-season injury plague, with starters Keane, Steven Gerrard, Leonardo, Dan Kennedy, A.J. De La Garza, and now Robbie Rogers all on the shelf, and designated player Dos Santos playing tonight in only his second game of the season.

The Timbers, meanwhile, will return home for a daunting two-game week, hosting conference leading FC Dallas on Wednesday night, and then the San Jose Earthquakes on Saturday.

Fanendo Adi put on a one man show of how effective a true number #9 striker can be.  With most of his midfield dropping deep to provide cover against the aggressive Galaxy attack, Adi nevertheless managed to create shots and draw multiple defenders all night long.

Nat Borchers kept the Galaxy in check all night long, and his play was the most responsible among the Timbers for keeping the enemy team’s score at zero.  Until it wasn’t, when his diving header failed to clear his own team’s frame and rescued the Galaxy.  A shame, too, for Borchers’ play otherwise was excellent.

Giovani Dos Santos is just coming back off injury, so he can probably be excused for tiring in the second half.  But his desire to hold onto the ball rather than work with his teammates is another matter.  It’s simple: with Keane gone, the offense is his, and it failed to find the net. Dos Santos was brought to the Galaxy to engineer the offense, and tonight he showed he has far to go.