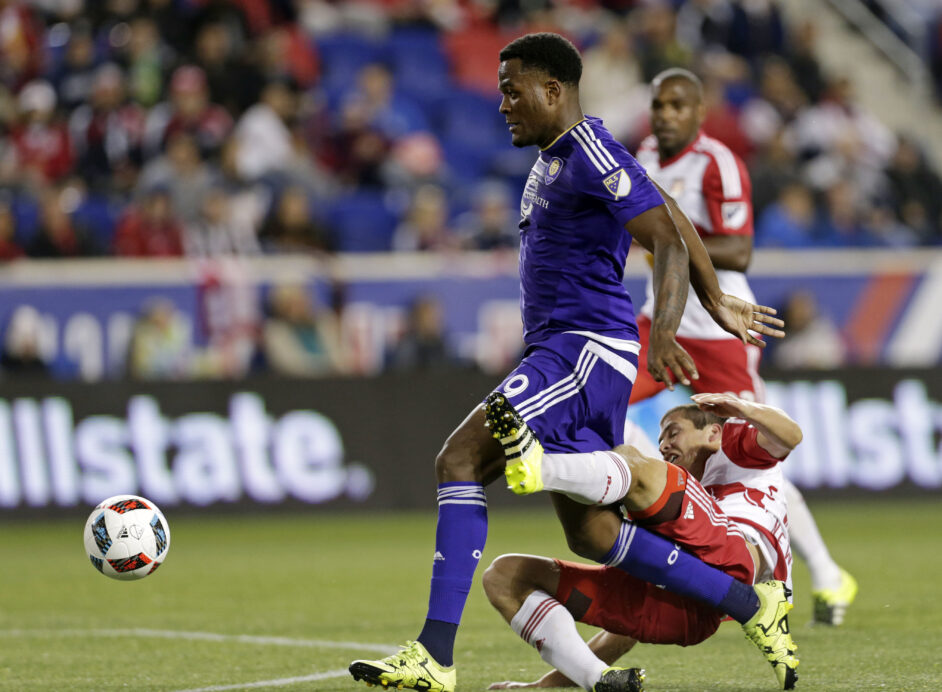 Orlando City suffered a 3-2 road loss to the New York Red Bulls on Sunday night after allowing them to mount a comeback, but it was the play that happened just before the rally began that most people will be talking about.

Orlando City was already up 1-0 when it looked to be on the verge of potentially doubling the lead in the 63rd minute. Cyle Larin raced in on goal on the play to try and bring down a bouncing ball and put it on frame, but was sent to the ground via a challenge from centerback Karl Ouimette before having a chance to do so.

Referee Hilario Grajeda did not call a foul on Ouimette, much less give him a red card for the denial of a clear goal-scoring opportunity, and the Red Bulls came down the field and began their rally two minutes later.

The Lions were convinced that a foul should have been called and a penalty kick awarded.

“Goals change games,” said Orlando City head coach Adrian Heath. “Two-nil makes it a completely different game. Are they down to 10 men? Even if you don’t score the penalty, it changes the whole complexion of the game. Big decisions change games.”

“I think it was a penalty,” Larin said after the match. “I was in front of the guy and I touched the ball and he took me down, and the keeper got up to the ball.”

Replays showed that the contact between Ouimette and Larin came outside the box, but the channel, Fox Sports 1, that broadcasted the game reported on Sunday night that Professional Referees Organization general manager Peter Walton thought the play was deserving of a penalty and an ejection.

For Orlando City, the no-call was the latest in a string of controversial decisions that have gone against the club recently. MLS has seen its match officials receive heavy criticism across the league this season because of a slew of poor calls, but Orlando City might have the biggest gripe after being at the center of two of them during the past couple of weeks.

The Lions gave up a last-gasp equalizer via a questionable penalty kick vs. the New England Revolution on April 17 after Servando Carrasco was whistled for a handball, and also did not have an offside call go in their favor when Philadelphia Union midfielder Tranquillo Barnetta scored a late winner nine days earlier.

“I had Peter Walton ring me on Monday,” Heath said. “And say I’m really sorry four (Union players) were offside for Philly’s goal, really sorry that (the ball) didn’t hit Servando Carrasco’s arm (vs. the Revolution).

Orlando City did not solely blame Grajeda’s decision for the result. Heath gave credit to the Red Bulls for the performance they put forth and said he thought they ‘deserved’ something from the game. Lions defender Brek Shea added that the Lions should not have been in a position to allow the no-call to play such a big factor.

Still, there was frustration in the locker room after the match and it was palpable.

“This is pretty bad. This is three in three weeks now,”  Orlando City goalkeeper Joe Bendik said. “That’s just pretty unacceptable, I think. Some of them admit to it and some of them will just try to defend themselves. For me, if I let the ball roll through my legs three times, I won’t be able to show my face in the locker room.”

“I think the refs have to do a better job,” Larin said. “It costs teams games.”