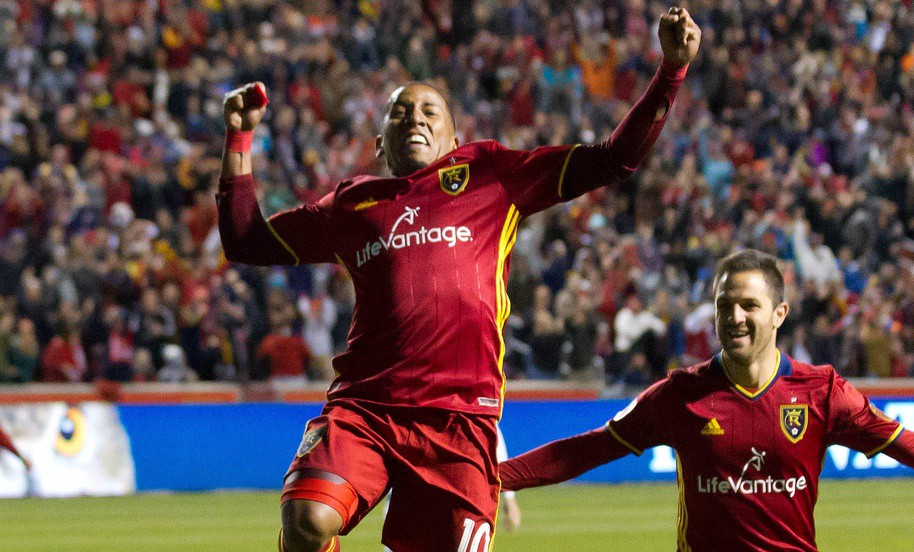 Several of the top contenders in MLS picked up statement wins, while the league’s lone winless team emerged from the doldrums with their first victory of the season.

Real Salt Lake’s unbeaten run atop MLS continues, while the Columbus Crew finally joined the rest of the competition by putting a notch in the win column. Joining RSL in victory were Western Conference contenders like FC Dallas and the LA Galaxy, while Didier Drogba and the Montreal Impact once again stood out in the East.

It wasn’t all good for the league’s top contenders, though. Sporting Kansas City fell twice in five days, while the New York Red Bulls’ struggles continued with yet another winless week.

Here’s a closer look at this week’s Power Rankings:

THIS WEEK: at LA Galaxy on Saturday

OUTLOOK– It wasn’t necessarily beautiful, but RSL’s defeat of the Whitecaps kept the club as the league’s lone unbeaten side. Juan Manuel ‘Burrito’ Martinez and Joao Plata have emerged as one of the league’s most fearsome attacks, while the defense has stood strong through the start of the season. After a difficult 2015, RSL appears to have it all together in a season where it has the potential to be one of the league’s top sides for the long haul.

THIS WEEK: At Vancouver Whitecaps on Saturday

OUTLOOK– A heck of a week for FC Dallas, who took down two of the Western Conference’s elite to make yet another statement. Even without Mauro Diaz, FC Dallas continues to fly as players like Michael Barrios have stepped up in a big way. To date, FC Dallas has lived up to expectations and looks to be a real threat to the Supporters’ Shield race.

OUTLOOK– Didier Drogba is back, and he’s scoring. The Ivorian star scored just several minutes after being introduced in what should serve as another warning shot across MLS. With Drogba leading the way and Ignacio Piatti pulling the strings, the Impact are scary and will be tough to outgun in any given game.

OUTLOOK–Led by Giovani dos Santos, the Galaxy cruised past the Dynamo in the team’s most impressive effort of the young season. Dos Santos and Steven Gerrard played their best games since moving to MLS while Gyasi Zardes also earned a spot on the scoresheet. Set to miss Nigel de Jong for the next few weeks, the Galaxy may have found a solid formula in the absence of their Dutch midfielder.

OUTLOOK– Don’t look now, but there appears to be something special going on at Dick’s Sporting Goods Park. Victories over both Sporting KC and the Red Bulls headline a spectacular week, while the debut of Jermaine Jones went perfectly to script. Through seven games, the Rapids look to be for real as the club awaits Tim Howard’s arrival in the summer.
————————-

OUTLOOK– Sporting KC endured a difficult week, falling twice to a pair of Western Conference opponents. The pair of defeats mean Sporting KC has lost three of the team’s last four games, a concerning stat for a group that looked so strong to start the season.
————————-

OUTLOOK– As controversial as the tie was, Orlando City should be somewhat happy to escape with a point from Sunday’s clash with the Revs. The refereeing was questionable, to say the least, but at least the decisions affected both sides. The result is one to wash away and move on from ahead of a meeting with the struggling Red Bulls.

THIS WEEK: vs. New York City FC on Saturday

OUTLOOK– Consistency has been far from the Union’s strength this season, as a back-and-forth campaign continued with another loss. Roland Alberg’s 53rd-minute red card complicated matters, but, even in defeat, there were positives to take away. Josh Yaro looked good in his debut, and Andre Blake continues to shine for a Union team that just needs to put a string of results together.
———————–

OUTLOOK– An up-and-down week for the Timbers, who emerged with three points from games against fellow Western Conference contenders. Fanendo Adi looked good yet again, but the Timbers’ injury issues continued with the departures of Adam Kwarasey and Darren Mattocks. Darlington Nagbe and Liam Ridgewell are likely nearing returns, though, signaling a major boost for the club.

OUTLOOK– It was a much-needed win for the Sounders, but even more so, it was a much-needed goal for Jordan Morris. The Stanford product finally found the back of the net in what the Sounders hope will be an early turning point after weeks of struggles. The Sounders definitely aren’t a finished product quite yet, but with performances like Saturday’s two-assist effort from Andreas Ivanschitz, they’ll be better than they have been so far.
————————-

THIS WEEK: At D.C. United on Saturday

OUTLOOK– Another draw for the Revs, but this one was certainly unlike any that preceded it. An absolutely ridiculous final few minutes of play saw both the Revs and Orlando City bury chances to earn share of the points. With refereeing taking such control of a game, both sides are lucky to escape with a point and a chance to put a mess like that behind them.
————————

THIS WEEK: At Montreal Impact on Saturday

OUTLOOK– It took just one minute for Sebastian Giovinco to make his mark, and it proved to be all TFC needed to escape with a win. Clint Irwin was spectacular in keeping things locked tight in the penalty area in what turned out to be an impressive defensive performance. Through six straight road games, TFC has done as well as many could have hoped with just two more games coming before a return to BMO Field.
————————-

OUTLOOK–  Finally. The Crew are back in the win column for the first time since 2015, and it was the play of the team’s stars that got them there. Kei Kamara, Ethan Finlay and Justin Meram each got on the scoresheet, while Wil Trapp continues to boss play from the midfield. Is it the end of the team’s rut? Maybe, but the Crew still have a bit of ground to make up after struggling so much to start the season.
————————-

OUTLOOK– Following three straight shutouts, the Fire were undone by Drogba and the Impact on Saturday afternoon. At this point, there is little shame in falling to last weekend’s opposition, especially without David Accam in the lineup. Still, the attack remains a bit of a concern, as the Fire struggled to generate more than a Kennedy Igboananike wonder-strike in the loss.
————————-

OUTLOOK– It may be harsh, but the Whitecaps have looked very, very bad in recent weeks. Shutout for the third straight contest, the Whitecaps have seemingly lost all of their attacking mojo. Octavio Rivero continues to struggle, and with his issues, the Whitecaps do not look like anything resembling a playoff contender through seven games.
————————-

OUTLOOK– After starting strong, a series of defensive breakdowns saw the Dynamo get demolished by the Galaxy on Friday night. The Dynamo routinely get themselves into the lead, but have struggled mightily with preserving any sort of advantage throughout the season. Defensively, the Dynamo need a cleanup if they hope to win more than one of their next six contests.
————————-

OUTLOOK– After sealing its first win in the prior game, D.C. United slumped to yet another defeat at the hands of TFC. It took just one minute for Sebastian Giovinco to steal the lead, and DCU just couldn’t generate the chance required to get back into it. Is that four-goal performance an aberration? It appears to be so, as D.C. United continues to struggle through the start of the campaign.

OUTLOOK–  The loss to the previously-winless Crew make it five straight without a win for NYCFC. After so many strong showings, the team was poor defensively, while the attack remains all too reliant on David Villa to shoulder the load. Despite prior results, it appeared NYCFC had taken a step forward, but Saturday’s efforts proved to be another step back.
————————-

OUTLOOK–  A brutal, brutal week for the Red Bulls. It’s at the point where you can take positives from the fact that the reigning Supporters’ Shield winners actually scored a goal in Saturday’s defeat. The recent pair of defeats make it four straight for a team that entered 2016 with high hopes. At this point, changes need to be made or the Red Bulls risk falling further and further out so early in the season.
————————-