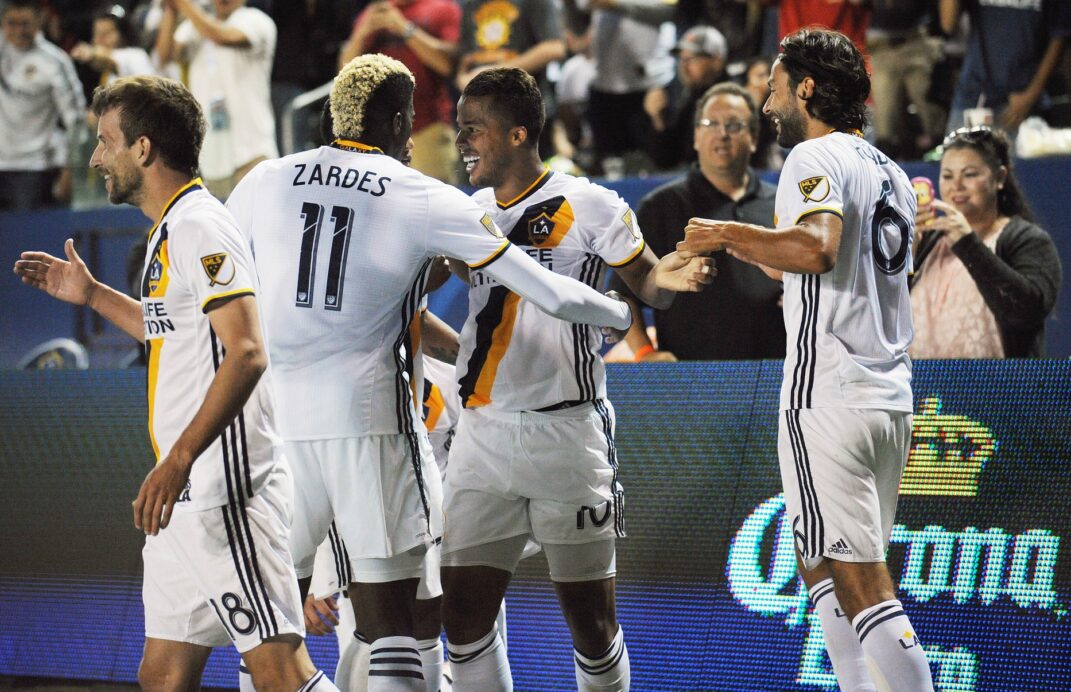 In a week that saw no ties across MLS, several contenders faltered while a few struggling teams emerged with big-time wins.

Previously-unbeaten Real Salt Lake was thrashed by the LA Galaxy, while the Montreal Impact, Sporting KC and FC Dallas each fell to defeat. In their stead, teams like the LA Galaxy and Colorado Rapids picked up statement wins to assert themselves in the Western Conference standings.

In the East, the New York Red Bulls finally put things together in a controversial win over Orlando City. The Columbus Crew and D.C. United also appear to be on the right track as each added their second wins of the campaign.

Here’s a closer look at this week’s Power Rankings:

THIS WEEK: at Sporting KC on Sunday

OUTLOOK–It was essentially a perfect performance from the Galaxy, whose stars stepped up to lead the way against previously-unbeaten RSL. Giovani dos Santos and Steven Gerrard are playing their best soccer since joining the club, while Emmanuel Boateng provided the best effort of his young MLS career. The Galaxy have now won their past two games by a combined 9-3 scoreline to once again emerge as a real power out West.

OUTLOOK– RSL came crashing back down to Earth with a resounding loss to the Galaxy. Previously the league’s lone unbeaten, RSL looked uncharacteristically sloppy and completely caved as the Galaxy poured on goals. Still, every team is allowed to have a stinker every now and then, and RSL will have to prove Saturday’s let down was exactly that rather than anything more.

OUTLOOK– It’s time to stop doubting the Rapids. Jermaine Jones netted his second goal in as many games, while Kevin Doyle provided a finish of his own to cap his return from injury. The Rapids aren’t going away and, with Tim Howard coming in the summer, it appears Pablo Mastroeni’s side is ready to compete throughout the 2016 season.
————————-

THIS WEEK: At New York Red Bulls on Friday

OUTLOOK– In a game that’s scoreline is slightly misleading, FC Dallas was swarmed by a previously-struggling Whitecaps team. While slightly sloppy defensively, FC Dallas’ issues came on the attacking end as David Ousted stopped shot after shot. Going forward, FCD will need to be a bit crisper in the final third if they hope to get on any real run.

OUTLOOK– The Union have quietly moved atop the Eastern Conference with Saturday’s defeat of NYCFC. C.J. Sapong is playing at a top, top level, while Tranquillo Barnetta has proven to have the skill the Union need to pull the strings. There’s still a long way to go, but it looks like the Union have some legitimate pieces together to make some noise in the Eastern Conference.
———————–

THIS WEEK: At Portland Timbers on Sunday

OUTLOOK– Sebastian Giovinco was phenomenal as usual, leading TFC to a statement victory over the Impact. TFC was certainly the better side throughout this past weekend’s clash and appear to be hitting their stride. With just one game remaining on the team’s season-opening road trip, TFC looks set for more success in the coming weeks with a return to BMO Field imminent.

OUTLOOK– Chris Wondolowski continues to lead the way, with Sunday’s effort coming from the penalty spot. The Earthquakes have proven unbeatable at Avaya Stadium, but now face a difficult stretch of road games that could determine where exactly they fit in a rapidly-evolving Western Conference.
————————-

THIS WEEK: at New York City FC on Wednesday; vs. Colorado Rapids on Saturday

OUTLOOK– In Didier Drogba’s first start of the season, the Impact were outplayed by their Canadian rivals. The Impact were dominated in the center of the field as Drogba was all but held in check throughout the entire contest. The performance will be a bit of a letdown, but the Impact now have a double game week to raise spirits.

OUTLOOK– Orlando City just can’t escape the wrath of the referee. Undone once again by a missed call, Orlando City have every right to feel a bit wronged by Sunday’s result. However, the Lions’ lack of composure in the aftermath also played a part in their demise and that lack of maturity will need to be rectified going forward.

THIS WEEK: at Vancouver Whitecaps on Wednesday; vs LA Galaxy on Sunday

OUTLOOK– Although unlucky on the day, Sunday’s loss the the Earthquakes did show some overarching problems. Sporting KC deserved a penalty kick, but no referee’s decision can make up for the fact the Sporting KC has now lost four of their last five. After starting so hot, it is time to be concerned, especially with two tough games coming up this week.
————————-

THIS WEEK: at New England Revolution on Wednesday; vs. Toronto FC on Sunday

OUTLOOK– Following a bye, the Timbers now have a difficult double game week ready to greet them. The week off came at the best possible time, as the Timbers hope to see several key pieces recover from injury in the near future.

OUTLOOK–  The Crew finally have their mojo back. Although the win over the Dynamo was far from the team’s best, the Crew have now won two straight after an abysmal start to the season. Now back in the mix, the Crew appear to have emerged from their rough patch following what looked to be an extended MLS Cup hangover.
————————-

THIS WEEK: vs. Sporting KC on Wednesday; at NYCFC on Saturday

OUTLOOK– The Whitecaps ended their goal drought in a major way, exploding to a 3-0 win over FC Dallas. Kekuta Manneh played his best game of the season, while David Ousted continued to provide a series of highlight-reel saves to keep things scoreless. Carl Robinson will hope Saturday’s victory will serve as a springboard that allows the Whitecaps to put their attacking woes behind them.
————————-

OUTLOOK– Two weeks after a four-goal performance, D.C. United hung three on the Revs. Luciano Acosta’s chip was as pretty a goal as one could score, and served as a signature moment from a signature win. Defensively, D.C. will always be solid, but Ben Olsen’s team will need to keep scoring goals if they hope to continue to move up the rankings.

OUTLOOK– Playing without Clint Dempsey and Nelson Valdez, the Sounders could not overcome a surging Rapids team. Jordan Morris looked good for the second week in a row, but, overall, the Sounders could muster little on Saturday. Brad Evans was sent off as frustrations boiled over for a team that still hasn’t put it all together.
————————-

THIS WEEK: vs. FC Dallas on Friday

OUTLOOK–  After giving up a goal early, the Red Bulls appeared destined for another loss. However, fortunes finally turned at Red Bull Arena. Bradley Wright-Phillips netted twice, while helping to end the Red Bulls’ woes in the process. The reigning Supporters’ Shield winners are far from back, but Sunday was a great first step.

OUTLOOK– With a week off to regroup, the Fire bring their strong defensive record to Toyota Park for a clash with suddenly surging D.C. United.
————————-

THIS WEEK: vs. Portland Timbers on Wednesday; vs. Orlando City on Saturday

OUTLOOK– Through eight games, the Revs have collected just one win, and it’s time to be concerned. While Saturday’s scoreline was probably a bit harsh, the Revs just haven’t had it click on the attacking end to this point. The Revs need something to change before the team digs a hole for themselves prior to the summer months.
————————

OUTLOOK– The results just aren’t coming for the Dynamo. Undone by a red card to Tyler Deric, the Dynamo were always up against it in the loss to the Crew. It’s been a difficult few weeks for the Texas club, who have sunk pretty far after a promising start to the season.
————————-

THIS WEEK: vs. Montreal Impact on Wednesday; vs. Vancouver Whitecaps on Saturday

OUTLOOK–  NYCFC continues to struggle, with the latest setback coming via a defeat to D.C. United. Without Andrea Pirlo, NYCFC looked toothless in attack, despite maintaining a bulk of possession. Patrick Vieira’s team is now winless since Week 1 and will need plenty of help in a difficult double game week.
————————-