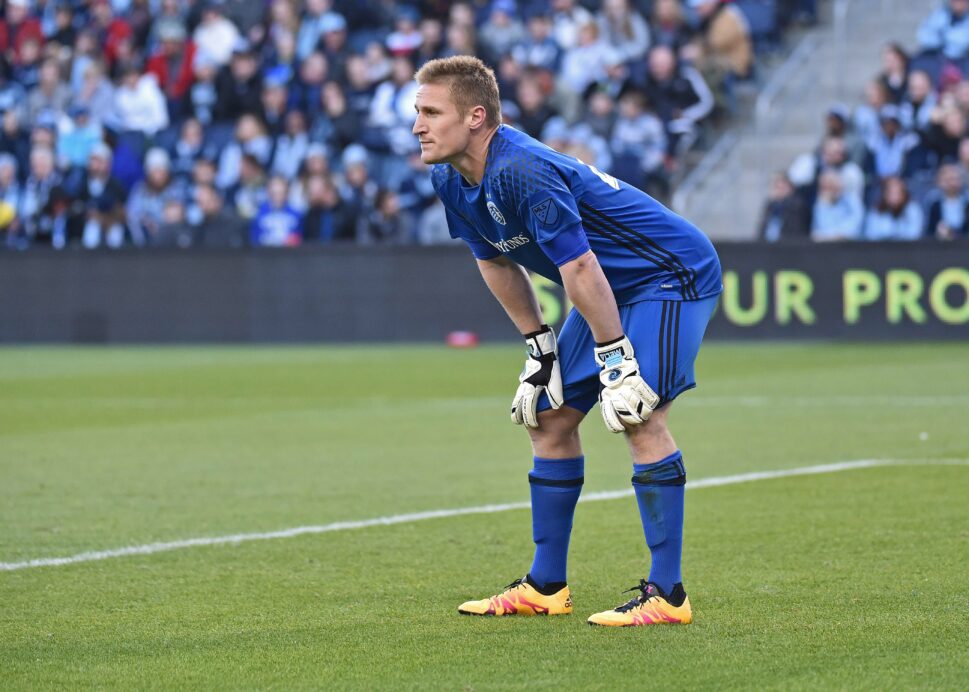 HARRISON, N.J. — When you give up nearly two dozen shots as a team in one game, you are more than likely going to need your goalkeeper to come up big in order to have a chance at getting at least a point.

Tim Melia was more than up for the task on Saturday night, and Sporting Kansas City reaped all the benefits as a result.

Sporting KC bounced back on Saturday night from its Week 4 loss to Real Salt Lake, going on the road and topping the New York Red Bulls, 2-0. Benny Feilhaber and Dom Dwyer scored on each side of halftime at Red Bull Arena, but it was Melia who earned much of the praise and spotlight after the match because of his six-save performance.

From the initial whistle, the Red Bulls put Sporting KC under intense by pressure by aggressively throwing numbers forward. They ended up with 22 shots on the night, some of which were very good, but were blanked thanks to a combination of tidy defending and excellent goalkeeping.

Melia even came through in the clutch in the 64th minute, stoning Bradley Wright-Phillips’ on a penalty kick that could have swung momentum back in favor of the Red Bulls.

“Tonight I think was one of the games where he put the whole entire package together,” said Sporting KC head coach Peter Vermes of Melia. “If you really look at Tim, you look at his background, he hasn’t had a lot of years of playing as a No. 1.

“I think coming into this year after the season he had last year, he was a much more experienced guy, although it’s not a lot,” Vermes said. “It just gives him an ability to come in this year and be the No. 1. From the beginning of the year, he’s been very good. He really has. Tonight, I think everything kind of came together for him. I’m happy for him because he’s a hard worker, he really is.”

Melia put in plenty of hard work against the Red Bulls. He was forced into a low save 14 minutes in on a drawn-up corner kick that ended with an open Lloyd Sam firing free on goal from the top of the 18-yard box.

Six minutes later and just shortly after Feilhaber opened the scoring, Melia again came up big to deny Wright-Phillips on a headed effort that was going towards the back post. Melia prevented Wright-Phillips from scoring again in the 26th minute, using a kick save to stop a hard shot from the right side of the penalty area.

“It’s almost not surprising to us anymore because he does it so much,” said midfielder Graham Zusi. “He’s just a monster back there, and game in and game out he makes two or three game-saving saves. No different tonight. He was a monster, and that PK save was a turning point.

“If that gets them within a goal, and a lot of times teams can grab a lot of momentum and really throw the kitchen sink at you. For me, that’s a game-saving PK save.”

While Sporting KC raved about the 29-year-old goalkeeper’s saves, Melia deflected the praise aimed his way like it was a Wright-Phillips shot. He preferred to talk up his teammates and the performances they put forth in helping record the club’s fourth victory and third shutout in five games.

“How many blocks that our defenders made, our midfield closed guys down. It was really a team effort,” said Melia. “Shutouts are team efforts, they are not the goalkeeper’s by any means. I think this is a game we can really build off of.”