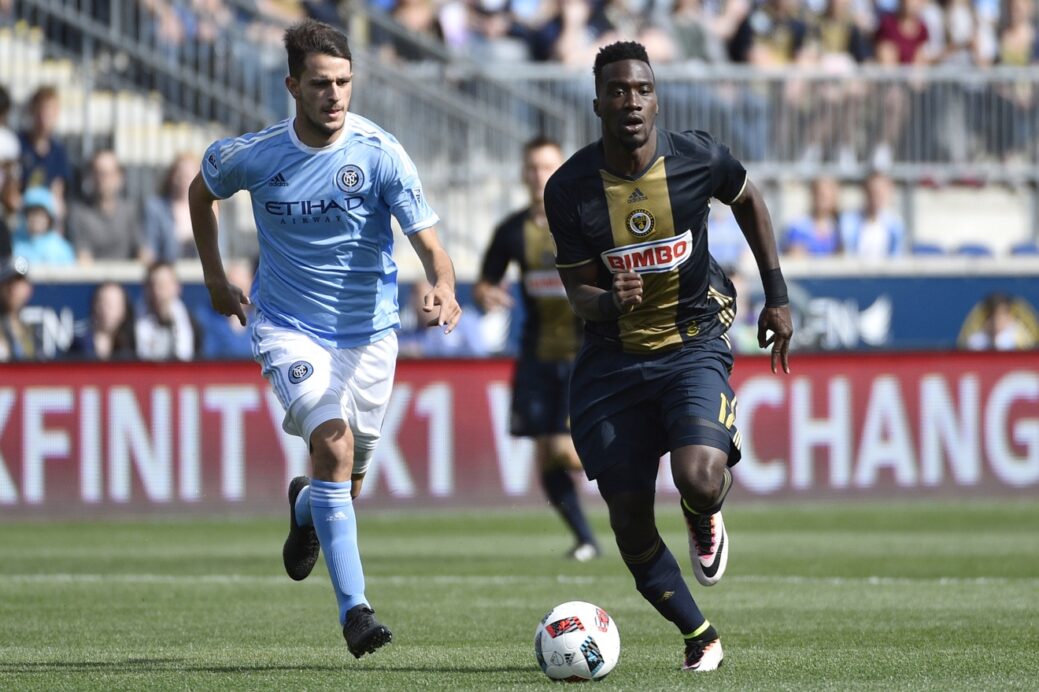 CHESTER, Pa — The Philadelphia Union moved into first place in the Eastern Conference on Saturday with a 2-0 win over New York City FC at Talen Energy Stadium.

Chris Pontius and C.J. Sapong netted a strike each in the victory that moved the Union ahead of the Montreal Impact on goal differential.

NYCFC had the first clear-cut chance of the game come its way in the 25th minute as David Villa linked up with a Steven Mendoza pass and struck the underside of the crossbar.

A few minutes after the visitors came close to taking the lead, the Union moved in front on the scoreboard by way of a Chris Pontius strike.

Pontius, who spent a majority of the minutes prior to the goal receiving treatment for a cut under his right eye, pounced for the opener from close range after Tranquillo Barnetta produced a nice pass from the right side of the penalty area.

The goal was the third of the season for Pontius, who opened his 2016 account with a brace in Week 2 against the Columbus Crew.

The Union extended their advantage to two goals in the 41st minute as C.J. Sapong redirected a Sebastien Le Toux shot from the top of the box into the bottom-left corner of the net. Sapong’s strike was his fourth of the season and third in three matches for the Eastern Conference leaders.

The second half produced few chances on either side of the pitch as the Union were content to hold back and defend while NYCFC wasted the majority of its touches in the final third.

The Union moved into first with their fourth victory of the season and by way of the Impact’s defeat at the hands of Toronto FC in the 401 derby.

Tranquillo Barnetta was a force from the beginning of the match in his first start of the season. The Switzerland international provided the Union with a pair of threatening set pieces early in the contest before dishing out his first assist of the 2016 campaign in the 26th minute. The 30-year-old created three chances in the first half and remained a menace to the NYCFC back line before being substituted for Ilsinho in the 64th minute.

Within a span of two minutes in the middle of the first half, the match was flipped on its head. David Villa appeared to have put NYCFC ahead, but he struck the crossbar. Before the Spaniard could get over missing the scoring opportunity, Chris Pontius was celebrating his 27th-minute strike on the other end of the field.

Kwadwo Poku received an opportunity to impress manager Patrick Vieira with Andrea Pirlo out of the matchday squad, but the midfielder failed to do anything close to that in his 59 minutes on the field. The 24-year-old was only involved in one NYCFC attack during his time on the field and failed to command the midfield like he has in past substitute appearances.