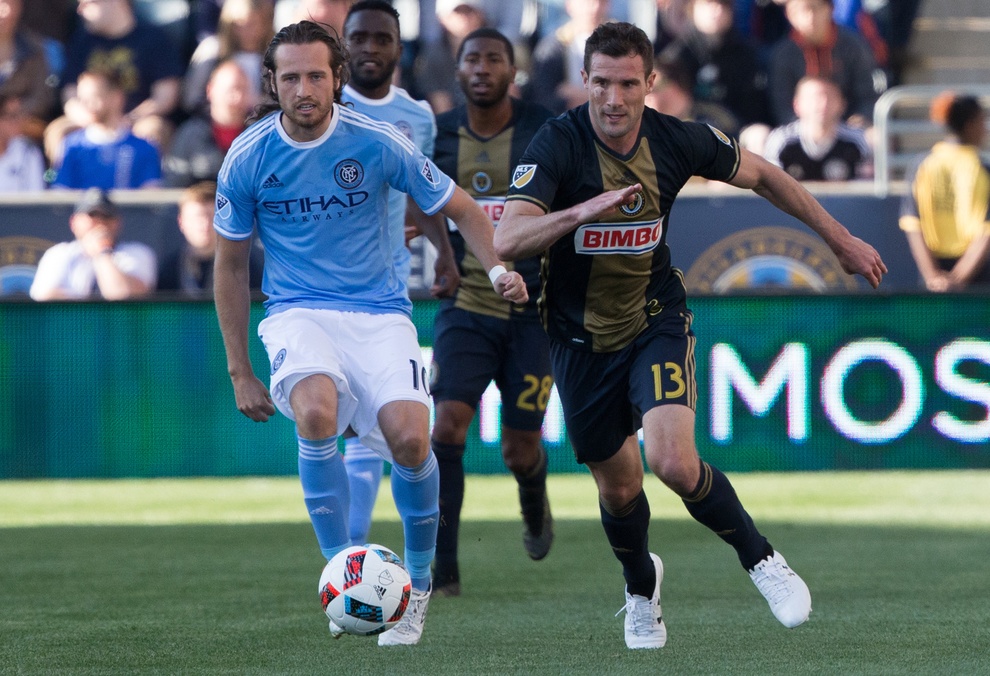 CHESTER, PA — The Philadelphia Union players were the first to admit after Saturday’s 2-0 win over New York City FC that they had to find a better way to kill off the game.

The Union held just 35 percent of the possession over 90 minutes, but they were able to take advantage of their scoring opportunities in the first half when they were presented.

“It’s something we’re not used to, for sure,” forward C.J. Sapong said. “But I think we responded well in that moment, the thing that matters the most is everybody putting in the effort, and everybody competed from minute one to 90-plus. I feel like if we keep doing that, we’ll find ourselves in a lot of positions to get a lot of points.”

Chris Pontius finished off the first of two Union strikes in the opening stanza with one of his first touches after re-entering the pitch following treatment to a cut under his right eye.

“I was anxious on the sideline to get back in the game,” Pontius said. “It’s just one of those things where you have to be patient.”

The 28-year-old midfielder was one of the players critical of his finishing in the first half, despite placing a shot into the back of the net in the 27th minute.

“I thought we had some good moments in the first half,” Pontius said. “We could’ve scored a few more. I think back to the one around the keeper, and I have Tranquillo there, and I can play him. Overall, it was a good first half and not a great second half.”

“Not happy with the overall game on the day, but at the same time, good teams find ways to win when it’s not their best night,” Curtin said. “Give the guys heck of a lot of credit for keeping a clean sheet at home. Very good performances from some young guys on the field — guys that came in off the bench, impacted the game in a positive way. Happy in that regard.”

The Union received impressive performances from all three full backs, including halftime substitute Ray Gaddis. The centerback pairing of Josh Yaro and Richie Marquez limited David Villa’s shots on target despite his activity in the final third.

“I think for us, the big thing was staying together as a unit, because when a team plays together like that as a unit, it’s really hard to break a defense down,” Yaro said. “And I think we did that really well collectively, sticking together even when things were not going right. And I think that’s what played to our advantage today.”

Although they weren’t happy with the majority of their collective performance, the Union did set a franchise record of five consecutive home wins.

The progress is a positive sign for a team that is on top of the Eastern Conference through goal differential, but the tests will keep on rolling into Talen Energy Stadium over the next few weeks. Next up for the Union is Quincy Amarikwa, Chris Wondolowski and the San Jose Earthquakes on Saturday.