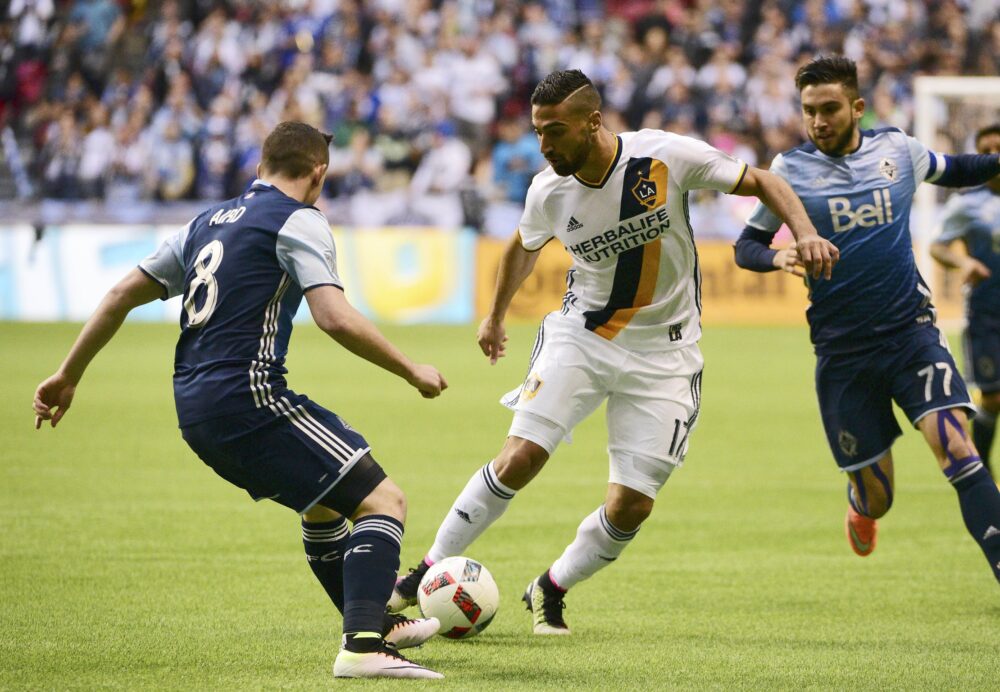 The Vancouver Whitecaps quickly found themselves down a man at home against the LA Galaxy, but the team’s defensive unit stepped up in a major way to earn the team a hard-fought point.

Midfielder Matias Laba was sent off in just the 28th minute, but David Ousted, Tim Parker and Kendall Waston led a strong defensive effort in a 0-0 draw with the LA Galaxy at BC Place. The draw extends the Whitecaps’ unbeaten run to three, while the Galaxy settle for a point after exchanging a win and a loss in their prior two contests.

Laba’s red card seemingly doomed the Whitecaps in the early going. The Whitecaps midfielder was dismissed by referee Jair Marrufo for a studs-up tackle of Mike Magee, swinging momentum in the Galaxy’s favor early on.

The Galaxy never capitalized on their numbers advantage. Playing without star forward Robbie Keane, the Galaxy mustered just four of 15 shots on target, with Ousted stopping each attempt on frame. In addition, the Galaxy were without Gyasi Zardes until the 61st minute as the forward was limited after returning from U.S. Men’s National Team duty.

Ousted’s best stop on the day came on a shot from the USMNT forward, who saw his close-range volley from just outside the six-yard box smash off the face of the Danish goalkeeper and out for a corner kick.

Although the Whitecaps will likely be more than happy with a point, the evening was dampened a bit by the losses of Pedro Morales and Kekuta Manneh, both of whom were removed in the first half due to injury.

With four saves to his credit, David Ousted made the difference between a draw and a disappointing loss. The Whitecaps goalkeeper was spectacular throughout and demonstrated all of the qualities that have earned him recognition as one of the shot-stoppers in MLS.

Faced with the Galaxy’s best look in the 72nd minute, Ousted’s stop of Gyasi Zardes kept the Galaxy at bay on the visitors’ best look of the night.

Widely recognized as one of the top defensive midfielders in MLS, Matias Laba rarely makes mistakes like he did on Saturday night. Luckily for him, it didn’t cost his team completely, as the Whitecaps rallied to snag a point despite the dismissal and a pair of injuries.