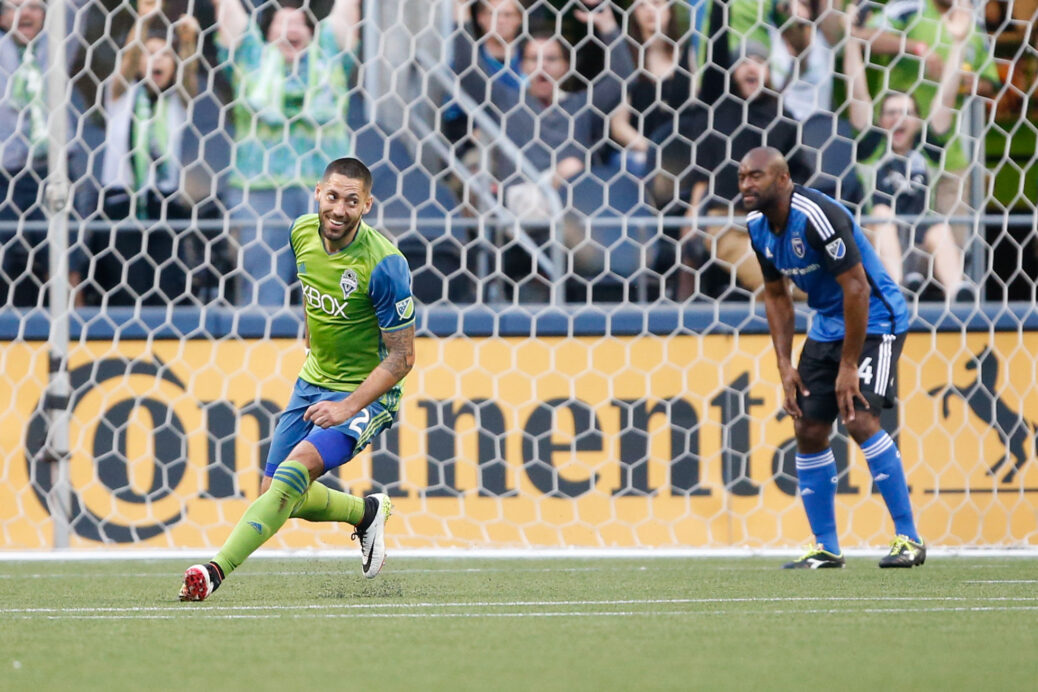 SEATTLE– What goes around comes around.

In 2015, the Seattle Sounders couldn’t catch a break against the San Jose Earthquakes, losing all three meetings by a combined score of 8-4. To add insult to injury, center back Roman Torres tore his anterior cruciate ligament in the third and final match, a 2-0 road loss.

But on Saturday night, the Sounders (4-4-1, 13 points) took an early lead and proceeded to dodge bullet after bullet before finding a late insurance goal for a 2-0 win in front of 39,570 at CenturyLink Field.

Clint Dempsey opened the scoring in the 26th minute, finding himself in a bit of space just beyond the penalty spot and pushing a one-touch shot past a helpless David Bingham. Erik Friberg delivered a lovely final pass, and Jordan Morris earned a secondary assist on the play. It was Dempsey’s second goal of the season, his first from the run of play.

Morris added the insurance goal in the 89th minute, ripping a 22-yard shot that nutmegged defender Shaun Francis before skipping past Bingham for the 2-0 lead. It was his fourth goal in as many games, tying the MLS rookie record for consecutive games with a goal, a record he now shares with Damani Ralph (Chicago Fire) and Patrick Mullins (then with the New England Revolution).

While the Sounders controlled play for much of the night, the Earthquakes (4-3-3, 15 points) failed to capitalize on a series of golden chances.

Chris Wondolowski, who has scored nine of his 116 career goals against the Sounders, missed the first chance just after the half hour mark. Shea Salinas slipped Wondolowski behind Seattle’s back line, but the striker could never cleanly latch onto the pass and slipped as the ball rolled harmlessly to goalkeeper Stefan Frei.

Just minutes into the second half Frei delivered his second stellar kick-save in as many weeks, denying former Sounder Chad Barrett from point-blank range. Jamaican international Simon Dawkins slapped the bottom of the crossbar on a 20-yard free kick in the 59th minute, the ball hitting the turf mere inches — at most — from the goal line.

Lastly, referee Alan Kelly awarded the Earthquakes a penalty kick in the 84th minute after Tyrone Mears brought down Victor Bernadez in the penalty area. Wondolowski stepped to the spot, but sent a poorly taken penalty kick off the outside of the left post.

The game flowed downhill for the Sounders from the opening whistle. The hosts earned four corner kicks in the first 20 minutes. They out-shot San Jose 9-2 in the first half, controlling 56 percent of possession in the process.

Erik Friberg. Earning his first start since straining a knee ligament against Real Salt Lake in mid-March, the versatile midfielder was all over the field on Saturday night. He delivered the assist on Dempsey’s goal, anchored countless buildups, and even put in some stiff defensive plays. Cristian Roldan might have a hard time finding his way back into the starting lineup.

Dempsey’s goal. If the Sounders are to challenge for an MLS Cup they will need to get Dempsey back to regularly scoring goals. They’re certainly hoping Saturday night was the start of big things.

Left back Joevin Jones struggled with the San Jose attack all night, but the nod has to go to Wondolowski. He had two golden chances and failed to put either on frame.