Galaxy rue inability to hold onto lead in draw with Union 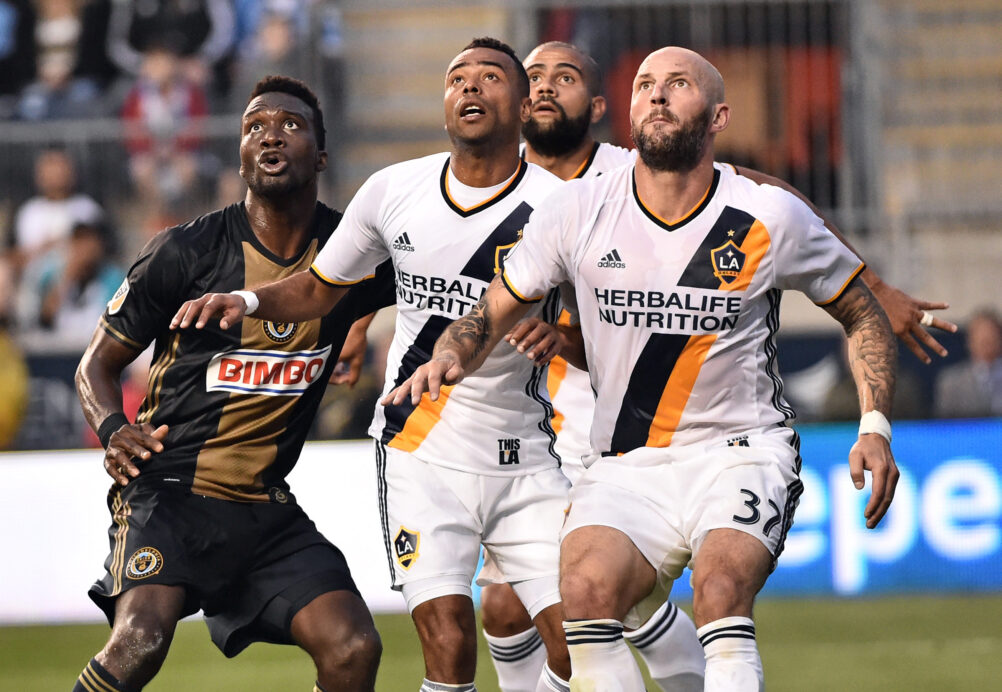 CHESTER, Pa. — The LA Galaxy were pleased to end the night with a result on the road, but they were also frustrated about it not being a win given the circumstances.

The Galaxy played the Philadelphia Union to a 2-2 draw inside of Talen Energy Stadium on Wednesday night, but the point the Western Conference club picked up was not all that savory. The Galaxy had flipped the script on the game and led 2-1 shortly after halftime, but some subpar goalkeeping allowed rookie defender Keegan Rosenberry to pull the Union level in the 63rd minute with his first career goal.

“We’ll take the point, but when we get the second early in the second half I’d like to see us close the game out,” said Galaxy head coach Bruce Arena. “Obviously, there’s a lot of time left and we didn’t do a good job of that and we probably could’ve done a better job on their second goal.”

The Galaxy initially trailed in the match after just four minutes. Vincent Nogueira punished some clumsy defending with a low finish, sending the Union fans in attendance into a frenzy and giving the players a good bit of confidence to take the game to Arena’s men.

As the first half wore on, the Galaxy found their footing. They eventually pulled level on a gorgeous team goal that was punctuated with a nifty pass from birthday boy Giovani dos Santos, and a well-placed shot by right back Robbie Rogers.

The Galaxy then gave the Union a taste of their own medicine by striking shortly after halftime. Some more good build-up with nice combination play ended with Mike Magee firing home two minutes into the second half, putting the Galaxy in a good position to take all three points.

The Union mustered up a good response, however, by sending in waves of attack and the Galaxy struggled to cope.

“I think it kind of seems to be the way so far in our season in away games,” said Galaxy left back Ashley Cole. “They try to press us high. Maybe we should be a little more confident on the ball. We have good players here who can play, so maybe we should try to play out a bit more, not be too scared to take risks. We have people that can do it.

“I think they just put in pressure on us high up the pitch, but we have to deal with and maybe change our forward mind in maybe hitting a few more longer balls and let the front three kind of chase it down.”

The Galaxy’s defense not only bent, but eventually broke. A corner kick was played in from the left shortly after the hour mark, and goalkeeper Dan Kennedy was unable to push a potent Chris Pontius header to safety. Instead, Kennedy spilled the ball in front of goal and an alert Rosenberry smashed the rebound home from point-blank range.

“I think the two goals we gave up were more due in part to our errors than their virtues,” said dos Santos, who turned 27 on the night.

While there was some disappointment from the Galaxy in not picking up another win to add to their season total, both Arena and his players said they were pleased to at least get a result on the road after facing a quick turnaround from Sunday’s home win against the New England Revolution.

The Galaxy are now unbeaten in eight matches, and their last loss is their only one to date. They are in a good position in third place in the dog-eat-dog Western Conference, and now head into a bye week with another point in the bag.

“Ultimately, we got the result and stayed undefeated (in this stretch), ” said dos Santos. “We have to keep going along this path.”