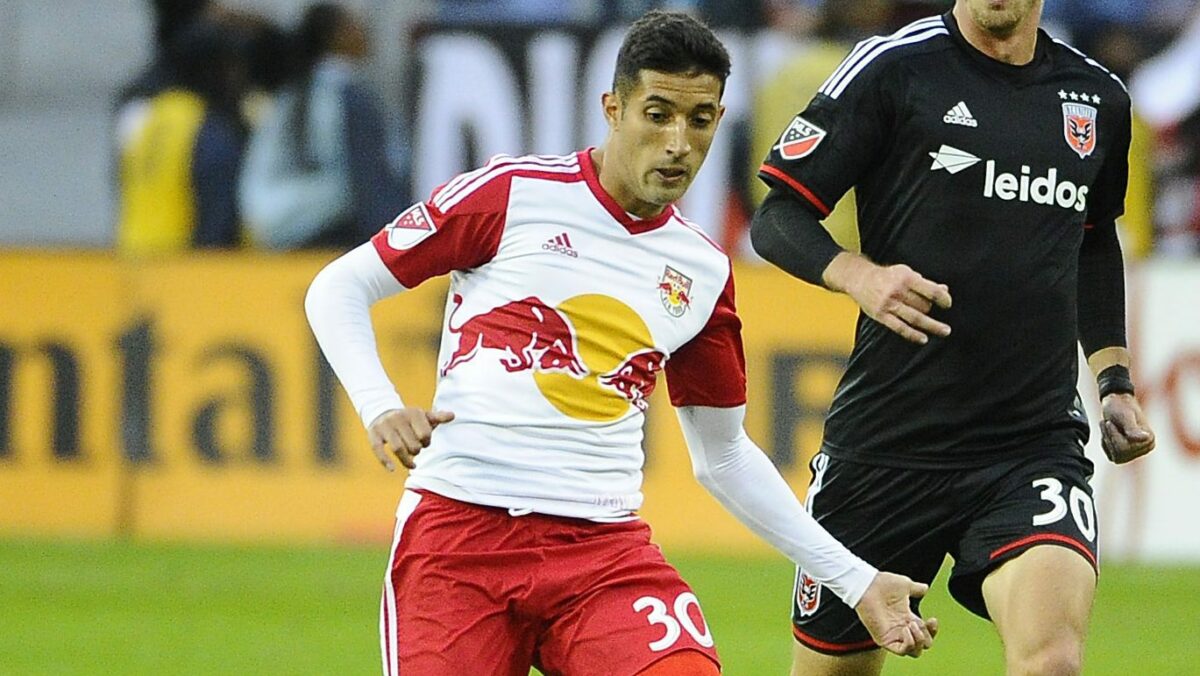 HARRISON, N.J. — The start of 2016 has not been the easiest for Gonzalo Veron. He saw an untimely preseason injury spoil the momentum he had going into the first game of the year, and then reaggravated it once he stepped back on the field. He also suffered a personal loss in his family prior to all of that.

Yet, somehow, Veron has remained upbeat and optimistic about what is in store for him this season with the New York Red Bulls.

Veron only recently returned to the field for the Red Bulls after spending the better part of three months on the sidelines with a pesky hamstring issue. The Designated Player came off the bench in the club’s 1-1 road draw with Orlando City last Friday, and his 26-minute cameo was a welcome development after enduring some trying moments both on and off the field in recent months.

“I lost my dad this year in January before coming here for preseason,” Veron told SBI. “Honestly, maybe that goes against you mentally because you start thinking that you want to do the best possible on the field and train the best way you can and then things don’t go as planned.

“When that happens, you obviously feel bad and you ask yourself, ‘What’s going on? Why is this happening if I’m doing the right things?'”

Losing a family member is always difficult, but it appeared as though Veron would not let his father’s passing affect him in his professional life. The 26-year-old Argentine enjoyed a strong preseason with the Red Bulls, and looked set to become a starter despite the fact that they were bringing back all of their attacking regulars from the 2015 season that saw them claim the Supporters’ Shield.

Then came the injury in the final game of the preseason. It forced him to miss the club’s first two games of the campaign, but he quickly recovered and returned to action. Maybe too quickly.

Craving to get back on the field in part because it would give him an escape from his personal life, Veron admittedly rushed back to start in the March 19 showdown against the Houston Dynamo. He last only 26 minutes, however, before the hamstring acted up on him again.

“For soccer players, stepping on the field is like being in another world,” said Veron. “Playing and not having injuries or other bad things happen makes you happy and you enjoy it. When you don’t have that, you need it. Without it, when you have stuff going on in your personal life, things get tougher.”

It certainly did not help that the Red Bulls struggled mightily in his absence. They had trouble finding the back of the net for a good stretch in March and April, and only recently began to rediscover their finishing touch and winning ways.

The Red Bulls did not win their most recent match, but did pick up a point on the road vs. Orlando City to extend their current unbeaten run to three games. Veron played a part in securing that result, first by playing on the wing and then by moving up top as the lone striker. What he showed in that Eastern Conference tilt only reinforced the club’s belief that Veron has what it takes to make an impact.

“He has a lot of flexibility and he’s gaining intelligence as to how we play the game,” said Red Bulls head coach Jesse Marsch. “I think his sense of what we require out of those different positions is pretty clear and then he’s just incredibly dangerous and explosive. Really happy to get him back on the field, really happy to have him back on the field and healthy, and now we’re looking forward in a real good way to get him fit and strong and help him establish himself in this league and with this team because we think very highly of him.”

Veron should have some opportunities to see even more minutes in the coming weeks. The Red Bulls will play the first of three games in a nine-day stretch on Friday with a visit to the nation’s capital to play rival D.C. United, and that is followed by a showdown with the Chicago Fire and much-anticipated derby match against New York City FC.

While Marsch plans to rotate players during that busy spell, he might be inclined to stick with his attacking foursome of Bradley Wright-Phillips, Sacha Kljestan, Lloyd Sam, and Mike Grella once the schedule gets back to one game per week. They have been performing well as of late, and, as the old saying goes, you don’t fix what isn’t broken.

Well, not unless you think there is still room to perform more optimally.

“Just because the team is doing well, does not mean it cannot be better,” said Veron. “If you’re doing well, you could still be doing better. It’s up to what the coach thinks and wants, and the confidence the player has. If the player has the necessary confidence, he surely will show more than his 100 percent.

“I’m conscience of the fact that I’ve been out for 6-7 weeks, and I’m not putting pressure on myself to get on the field quickly. If the team is doing well, it can always be better, and that’s what I’m going to try and show when it’s my turn to step on the field and play.”

Where Veron lines up when he does get another look is a bit of a question mark. He played primarily on the wing last season after being acquired from Argentine outfit San Lorenzo, but this year was used centrally and higher up the field as a false 10 or shadow striker in preseason and in his lone start vs. the Dynamo.

It currently seems unlikely that Veron plays in that role much given how well Kljestan has done as of late, and how Marsch recently described the American veteran as the perfect No. 10 for the Red Bulls. Still, Veron is hoping to be used in the middle of the park after previously expressing that sentiment to Marsch.

“The request was mine to want to play in that part of the field because it’s where I feel way more comfortable,” said Veron. “Taking advantage of my speed and the good technical skills from the midfielders and having the whole field to play with and being able to burst in and get behind the center backs, I think, that is where I can make the biggest difference.

“I think Jesse understood that and I understand Jesse, and I’m available to play wherever he needs me. Obviously, I listen to what he says and he listens to what I have to say to get the best out of me for the team. I anticipate to play in the position where I feel most comfortable, but I will work and play anywhere he asks me to.”

Veron may have a preference as to where he likes to play, but wants more than anything to help the Red Bulls improve regardless of where he lines up. He is healthy again, and is eager to make an impact while putting the tough times further behind him.