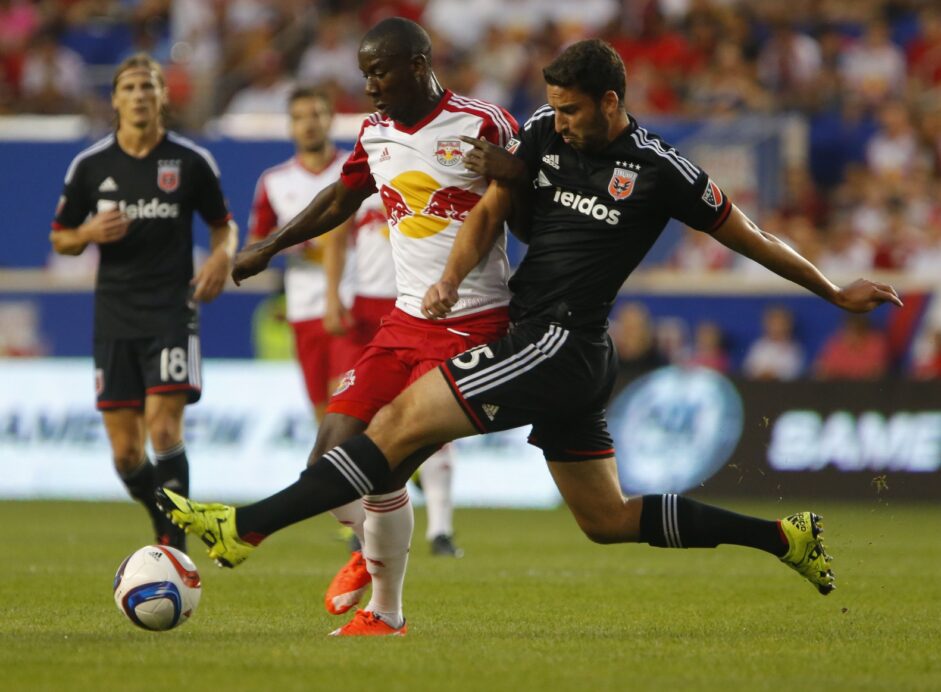 The MLS schedule was heavy on midweek games, but league action returns over the weekend with a  schedule of nine additional matches.

Headlining the proceedings is a rivalry clash that pits D.C. United against the New York Red Bulls. The meeting of Eastern Conference foes isn’t the only rivalry match on the docket, as Toronto FC hosts the Vancouver Whitecaps in a Canadian clash.

Canada’s other side, the Montreal Impact, is also in action against the team just behind them on the Eastern Conference table, the Philadelphia Union. The West also boasts a matchup of contenders when FC Dallas takes on the Seattle Sounders.

Finally, both sides involved in the Kei Kamara saga are also back in action. The Columbus Crew play their first game without the star forward on Saturday against the Rapids, while Kamara could make his New England Revolution debut against the Chicago Fire.

One of the league’s premier rivalries continues on Friday night.

Entering Friday’s game, both the New York Red Bulls and D.C. United sit on 10 points through as many games. If last season was any indicator the Red Bulls will be regarded as favorites despite a poor star to 2016 after going 4-0-1 against their rivals last season.

Aiding D.C. United’s cause will be the likely return of Fabian Espindola, who has been absent in recent weeks due to a hamstring injury. The Red Bulls may see contributions from an Argentinian attacker of their own as Gonzalo Veron could start after making an appearance off the bench in last week’s draw with Orlando City.

Although it may come as a bit of a surprise, Saturday presents a meeting of the top two teams in the Eastern Conference.

Through nine games, the Philadelphia Union have amassed 14 points following a midweek draw with LA Galaxy. With just three days rest, Jim Curtin could opt to test a young backline against the Impact, which could prove a blessing for Didier Drogba and Ignacio Piatti.

The pair of Impact stars proved vital in the Impact’s prior result: a 4-4 draw against the Columbus Crew. Now returning home to Stade Saputo, the Impact take on a Union team that has struggled away from home with three losses in four road games.

A pair of Canadian contenders are set to collide as Toronto FC plays at BMO Field for the second time this season.

TFC opened their renovated stadium with a victory last time out, knocking off FC Dallas, 1-0, on a goal from Tsubasa Endoh. On the rookie’s goal, Sebastian Giovinco netted yet another assist to continue his run of being a part of each of TFC’s 10 goals this season.

The Whitecaps will be a bit shorthanded in the forward department, but a spectacular brace from a wily veteran will help ease their concerns. Blas Perez is likely to get the start after earning the Whitecaps a win with a late stunner, while Masato Kudo’s broken jaw and an injury to Octavio Rivero will leave options thin up front.

After a week of controversy and off-the-field incidents, the Columbus Crew bring a whole new look into a clash with the Colorado Rapids.

Following his highly-publicized clash with Federico Higuain, Kei Kamara was traded on Thursday, depriving the Crew of their top forward option. The forward’s departure will likely open the door for Ola Kamara, who should be expected to step in to lead the attack. Defensively, the Crew will likely receive a boost in the form of Gaston Suaro after conceding three unanswered goals last time out.

Their opponents, the Rapids, are among the hottest teams in MLS. Jermaine Jones continues to be spectacular for his new club, which currently finds itself atop the MLS table. The Rapids are 5-0-1 in their last six, but could be tempted to rest some key players for an inter-conference match after defeating Western Conference foe Sporting Kansas City midweek.

Following a blockbuster deal that sent the forward from the Crew to the Revs, Kamara could be thrown straight in to the lineup against the Fire. Winless in six games, the Revs can use all the help they can get, but face some difficult decisions. Jay Heaps will have to construct a team around his new striker, which will all but certainly relegate some combination of Charlie Davies, Juan Agudelo and Teal Bunbury to the bench.

Following a 2-1 midweek loss to the Whitecaps and the ensuing cross-country flight, the Fire are in search of the team’s second win of the season. David Accam remains out, as the Fire look to amass some sort of points before the return of their Designated Player forward.

The Houston Dynamo continue to struggle, making the sight of Real Salt Lake a scary one for Owen Coyle and co.

A win over a struggling Sporting KC team was a welcome one for the Dynamo, but a midweek thrashing at the hands of the San Jose Earthquakes served as yet another setback. The loss saw Tyler Deric dismissed with his second red card of the season, opening the door for Joe Willis to start in net for a team that has won just one of seven.

Real Salt Lake have had no such issues in amassing a 5-2-2 record to date. The return of Joao Plata provides yet another boost after the diminutive forward rejoined the team with a substitute appearance in a loss to the Rapids last week.

The Jordan Morris show will now head to Toyota Stadium.

The Seattle Sounders forward has now scored four goals in as many games to break out in a major way. Add in the goalscoring of Clint Dempsey, and the Sounders have looked significantly better in winning three of their last four, although all three wins came at home.

FC Dallas is back following a major midweek rebound. After being shutout in three straight, FC Dallas came from behind to top the Portland Timbers, 2-1, on Wednesday. FC Dallas has yet to lose at Toyota Stadium and has collected 14 of a possible 18 points at home in 2016.

Sporting Kansas City may just be the coldest team in MLS, but Peter Vermes’ side is set to face a nearly-as-cold Orlando City.

Now winless in seven straight following a midweek loss to the Rapids, Sporting KC faces Orlando City, who hasn’t won any of their last five. The Lions have at least claimed three draws in that stretch to remain fifth in the Eastern Conference, but will see head coach Adrian Heath suspended for Sunday’s match.

The Portland Timbers and New York City FC enter Sunday on opposite streaks, despite each totaling just three wins on the young season.

A midweek breakdown against FC Dallas became the second straight loss for the Timbers. Goalkeeper Jake Gleeson has come back down to earth following several spectacular outings, but a return to Providence Park should provide a boost for a Timbers team that is 3-1-1 when defending their home field.

NYCFC will require some shuffling due to a suspension to Federico Bravo, but enter on a two-game winning streak. Aiding that streak has been the recent play of Tommy McNamara and Khiry Shelton, while David Villa continues to carry the goalscoring load while pushing himself into a tie for the league lead with seven finishes on the year.