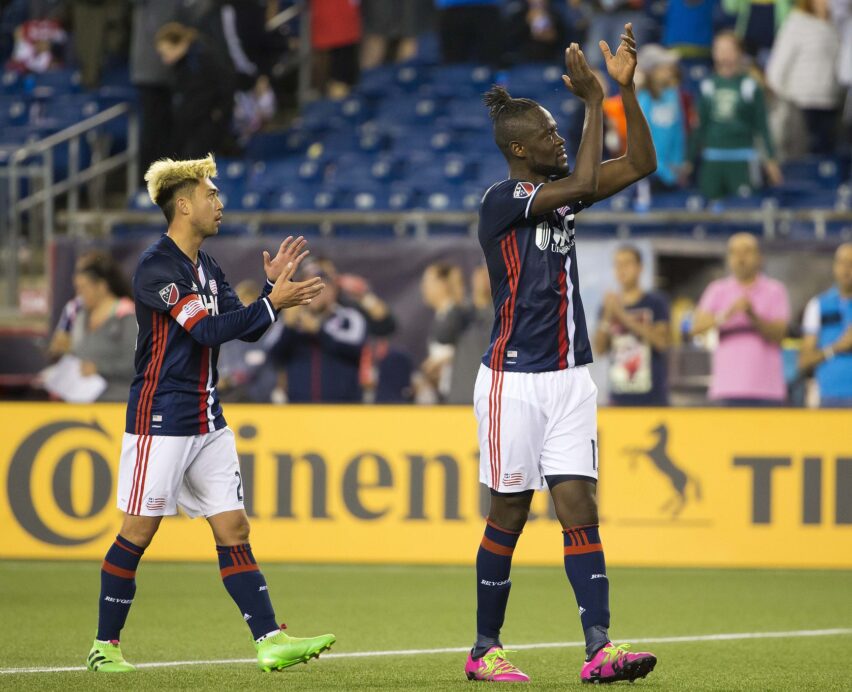 While the ramifications of the Kei Kamara trade were felt throughout MLS, the two teams involved in the deal for the star striker earned positive results in their first games since the transaction was completed.

Utlilizing Kamara for the first time, the New England Revolution toppled the Chicago Fire, 2-0, on Saturday, while the Crew emerged with a 1-1 draw against the Colorado Rapids.

Even with the draw, the Rapids continued to surge with a midweek win over Sporting KC. However, FC Dallas and the Vancouver Whitecaps were the week’s big movers, as the two combined for four wins throughout the week.

In the East, NYCFC inserted themselves into the list of contenders with a win over the Portland Timbers, while both Toronto FC and the Montreal Impact failed to pick up victories.

THIS WEEK: vs. San Jose Earthquakes on Sunday

OUTLOOK: The Galaxy were likely the second best team on the field in Saturday’s draw, but still did just enough to walk away with a point against an upstart Union team. Mike Magee continues to perform in various roles for the team, while the DPs have remained in good form for several weeks. Normally, a draw would be a bit frustrating, but the Galaxy will be happy with a point in a game that saw them make far too many mistakes to grab all three.

OUTLOOK: Another professional performance saw the Rapids take down Sporting KC before settling for a point against a Crew team going through chaos. The pair of results extend the team’s unbeaten run to seven games as the Rapids keep it rolling into a marquee clash with the Sounders.
————————-

OUTLOOK: FC Dallas followed up a losing streak with a bounce-back Cascadia double over the Timbers and Sounders. Concerns remain over the team’s road form, but FC Dallas is dominant enough at home to cruise past most teams.

OUTLOOK: Anibal Godoy and Alberto Quintero stood tall for the Earthquakes, who promptly dispatched the Dynamo midweek. To this point, the Earthquakes have done well to keep pace with the contenders out West, but now face a big-time test in a Cali Clasico.
————————-

THIS WEEK: vs D.C. United on Friday

OUTLOOK– The Union faced a pair of stiff tests, and, in many ways, passed. On paper, a pair of draws do not show just how impressive the Union were in stamping themselves as contenders with two gallant performances against the league’s elite.
———————–

THIS WEEK: vs. New York City FC on Wednesday; vs. Columbus Crew on Saturday

OUTLOOK: Toronto FC likely deserved some sort of result against the Whitecaps over the weekend, but failed to get one despite dominating play. The team now loses Jozy Altidore for an extended period of time, putting even more pressure on Sebastian Giovinco to lead the charge up top.

OUTLOOK: The Impact are now winless since April 16, but have earned four ties in that stretch to at least accumulate some points. Didier Drogba continues to play like a start, but the Impact need to start sealing better results if they look to remain atop the East.

THIS WEEK: at Sporting KC on Saturday.

OUTLOOK– A very surprising result for RSL, whose attack was all but held in check by the Dynamo. Through the opening weeks, RSL has emerged as one of the league’s top attacks but was held without a shot on goal last time out. Two losses in a row won’t put the team into panic mode, but improvement will be needed going forward.

THIS WEEK: vs. Chicago Fire on Wednesday, at Toronto FC on Saturday.

OUTLOOK: A pair of big-time victories now have the Whitecaps surging on a three-game win streak. Kekuta Manneh was an absolute star throughout the double gameweek, while Blas Perez’s highlight reel winner on Wednesday helped cap off a monumental week for the Canadian side.
————————-

OUTLOOK: The Sounders’ road woes continued, while Jordan Morris’ scoring streak came to an end. Following the msot recent defeat, the Sounders are just 0-3-1 away from CenturyLink Field, where they will host the Rapids this weekend.
————————-

OUTLOOK: A brutal week for the defending MLS Cup champions, who snatched exactly zero points from a possible six. The loss to NYCFC was particularly cruel, but Fanendo Adi’s continued scoring run gives at least some sort of positive to a bad, bad week.

THIS WEEK: at Toronto FC on Wednesday; vs. New York Red Bulls on Saturday

OUTLOOK: Once again, NYCFC put forth another performance that was arguably the best of their season. Tommy McNamara is playing like a superstar, as the midfielder continues to provide that second scoring option alongside David Villa. NYCFC is rolling heading into a very difficult pair of matches that could see them truly emerge as a legitimate threat to take down the East.
————————-

THIS WEEK: at Colorado Rapids on Wednesday, vs. Orlando City on Sunday.

OUTLOOK– Following another setback midweek, Sporting KC finally got back in the win column for the first time in seven games. With three of the team’s next four games coming at home, Sporting KC has a chance to claw their way back up the table following a miserable run.
————————-

OUTLOOK: The first result of the post-Kei Kamara era was largely a positive one. Facing a surging Rapids team, the Crew snagged a point while offering glimpses of what they will look like without their former striker. There is still work to be done, especially on set pieces, but the Crew can take some positives into a clash with TFC.
————————-

THIS WEEK: at Philadelphia Union on Friday

OUTLOOK: It wasn’t a complete masterclass, but D.C. United put forth a very good performance to topple the rival Red Bulls. Patrick Nyarko has enjoyed a bit of a rebirth with his new club, and D.C. continues to hang around the pack of playoff contenders.

THIS WEEK: vs. Chicago Fire on Wednesday; at NYCFC on Saturday

OUTLOOK: Following a three-match unbeaten run, the Red Bulls were embarrassed by rivals D.C. United on Friday night. Following the defeat, captain Dax McCarty blasted his team;s effort ahead of a double gameweek capped with a clash with NYCFC.

OUTLOOK: Sunday’s defeat was Orlando City’s sixth straight match without a win. It was an overall lackluster performance against a Sporting KC team that was also struggling, as Orlando City’s lone tally came via an own goal.

OUTLOOK: A down and then up week for the Dynamo, who did very well to take down RSL on Saturday. After collapsing in the second half against the Earthquakes, Owen Coyle’s side did well to bounce back and show character after playing so poorly to start the season.
————————-

OUTLOOK: Kei Kamara didn’t steal the show in the win over the Fire, but the star forward certainly impressed in his Revs debut. Defensively, the Revs held the Fire to seal their first shutout since March 12. If Saturday’s performance is any indication, and it may not be given the opposition, the Revs are set for an upswing with their new forward leading the charge.
————————

OUTLOOK– After playing in Vancouver on Wednesday, the Fire faced a cross-country flight ahead of Saturday’s clash agains the Revs. The wear and tear showed, as the Fire failed to muster a shot on target in what was a week damned from the start.
————————-