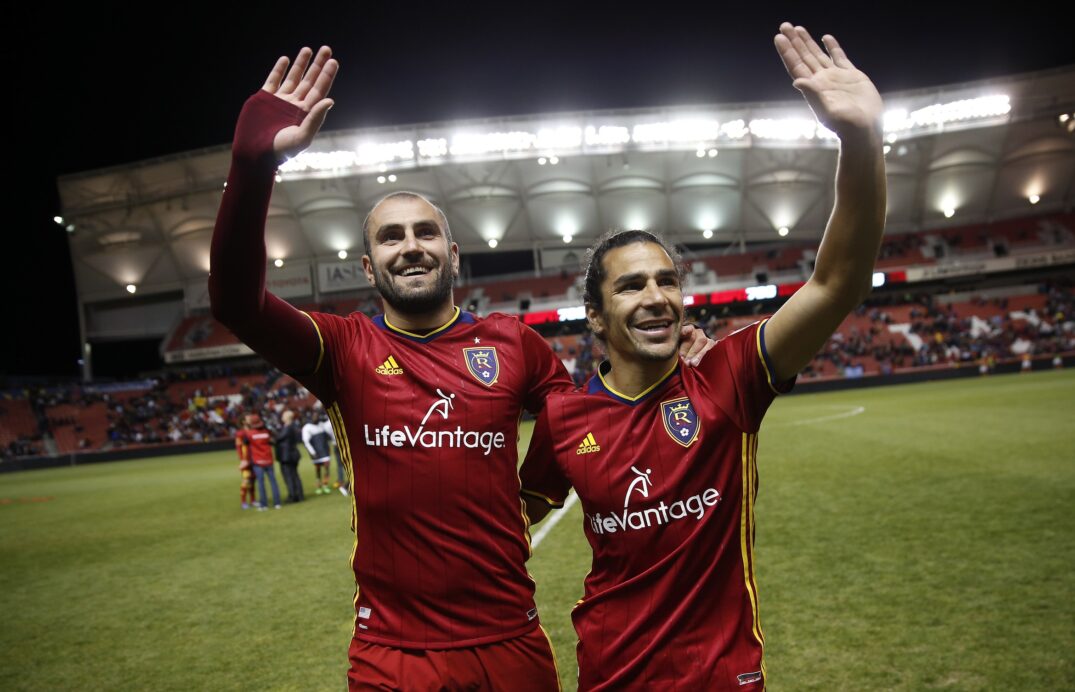 After snapping a massive season-opening losing streak the week prior, the New York Red Bulls proved they are back in business with a 4-0 demolition of FC Dallas. For the Western Conference contender, it was a worrying performance following a previous 3-0 beating from the Vancouver Whitecaps.

In the West, the status quo was maintained to some degree. The LA Galaxy, Colorado Rapids and Real Salt Lake each earned respectable results to remain among the conference’s elite. Meanwhile, the Philadelphia Union, Montreal Impact and Orlando City SC were forced into draws to headline the East.

OUTLOOK– Giovani dos Santos continues to fire, a positive sign for a Galaxy team that will be more than happy with a draw given the circumstances. Ashley Cole made his first true mistake of 2016 in being sent off, but the English star was bailed out by his teammates in a tough environment. Overall, a result the Galaxy will be happy with as the returns of Robbie Keane and Nigel de Jong move closer.

OUTLOOK– RSL gets back into the win column with a good win over the struggling Dynamo. Great performances from Nick Rimando and Jordan Allen headlined the day, as RSL bounced back from the team’s first loss to seal yet another victory.

OUTLOOK– A big performance from Shkelzen Gashi earns the Rapids a hard-fought point against a tough Impact team. Jermaine Jones continues to shine, and the Rapids are now riding a four-game unbeaten run. Even when the Rapids are behind, they still look the more likely team to score, a measure of the resolve the team has that is still surprising many.
————————-

OUTLOOK– The Union showed a bit of inexperience on Saturday allowing the Earthquakes back into a game that should have been finished off. Chris Pontius continues to look like one of the signings of the season, and even with a disappointing draw, the Union are unbeaten at home to date.
———————–

THIS WEEK: at Seattle Sounders  on Saturday

OUTLOOK– Simon Dawkins did just enough to earn the Earthquakes a point from a game in which they likely deserved none. The Earthquakes were able to grind out a result on Saturday, but will need to step up their game on the road with just two away points in four games.
————————-

OUTLOOK– A sour end to the team’s season-opening road trip. Undone by Jake Gleeson, TFC was saddled with the team’s third loss of the season ahead of a return to BMO Field. Now, four home games await a team that has certainly put itself in decent position following eight straight road games.

OUTLOOK– A late draw at Yankee Stadium could have served as a real starting point, but the Impact will be disappointed with a second tie against the Rapids. Didier Drogba showed his quality, but the Impact will certainly expect more than two points from an eight-day three-game stretch.

THIS WEEK: At Toronto FC on Saturday

OUTLOOK– Two weeks have produced two losses by a combined 7-0 scoreline for a struggling FC Dallas team. The defense absolutely wilted this past weekend, while even the return of Mauro Diaz wasn’t enough to spur the attack. FC Dallas is either transcendent or very bad, making the Western Conference contenders a bit of an enigma through 10 games.

OUTLOOK– A positive week for the Timbers, who netted four points from a pair of tough fixtures. Goalkeeper Gleeson emerged as the star, while Diego Valeri looked as impressive as ever. With Darlington Nagbe back in action, the Timbers are doing well after some initial struggles to start the season.

OUTLOOK–After dropping four of five, Sporting KC will still be slightly frustrated by a pair of conference draws. Up a man in both games, Sporting KC failed to capitalize and was left with only two points to show from a pair of games where it deserved more.
————————-

THIS WEEK: at Orlando City on Friday

OUTLOOK–  Don’t look now, but the Red Bulls might be back. That’s now two wins in a row for a team very much in need of them, and Friday’s result was by far the best yet. The attack clicked on all cylinders while the defense dominated a potent FC Dallas team, signaling a return to form for a Red Bulls team that looks to be much better than their paltry record indicates.

THIS WEEK: vs. New York Red Bulls on Friday

OUTLOOK– Some more late-game nonsense from Orlando City and the Revs, as the Lions benefited from a 90th-minute equalizer from Carlos Rivas. Still, Orlando City is winless in four games and will need to start amassing more points if they hope to count itself among the East’s elite.

OUTLOOK– Jordan Morris’ third finish in as many games wasn’t pretty, but it was enough to win the game for the Sounders. Following a barren period, Morris appears to have found his way. To date, the Sounders have yet to beat a Western Conference team, but will have three straight chances to do so, starting with this weekend’s clash with the Earthquakes.
————————-

OUTLOOK–  A bit of a setback for the Crew, who had their chances to get a result against the Sounders. Federico Higuain and Ethan Finlay were uncharacteristically sloppy, while Kei Kamara remains isolated from the rest of the attack. It’s still not quite there for the Crew, who have shown flashes of last season’s team but can’t quite muster the viciousness of last season’s attack.
————————-

OUTLOOK– After a decent performance against Sporting KC on Wednesday, the Whitecaps just couldn’t keep it together defensively against NYCFC. It comes down to putting it all together on both sides of the ball, something the Whitecaps haven’t been able to do to this point.
————————-

THIS WEEK: vs. New York City FC on Sunday

OUTLOOK– D.C. United’s on-and-off attacking performances continued with a draw against the Fire. DCU was forced to rally, and did so to earn their third road point from four games. All things considered, not bad, but D.C. United will hope to be a bit more consistent in the attack going forward.

THIS WEEK: At D.C. United on Sunday

OUTLOOK–  A major step in the right direction for NYCFC. Even though it conceded a late lead midweek, the second-year club was finally rewarded with a positive result on Saturday against the Whitecaps. The pair of performances were among the best the team has put forward this year, and could serve as a bit of a turning point for a team that just couldn’t finish games prior to this weekend.
————————-

OUTLOOK– The Fire defense continues to be as sturdy as any in the league, but the team’s attack remains a cause for concern. Level with the Crew for fewest goals in the league, the Fire attack hasn’t quite found its feet. David Accam should be returning soon, and if the defense can continue to play strongly week in, weekout, the Fire will have a chance every time.
————————-

OUTLOOK– A pair of home ties see the Revs continue the trend of dropping points each and every time out there. To date, the Revs have just one win as the team continuously snatches ties from the jaws of victory. It all comes down to decisiveness and composure, as the Revs need to learn how to win games sooner rather than later.
————————

OUTLOOK– Since what appeared to be a statement 5-0 win over FC Dallas, the Dynamo are now winless in six games. Owen Coyle’s side has lost five of those six games due to struggles on both sides of the ball. The defense is in no way capable of holding a lead, while the attack continues to sputter in what has become a period of major concern for a team that looked like a contender just over a month ago.
————————-