Accam leads Fire past Crew in U.S. Open Cup Round of 16 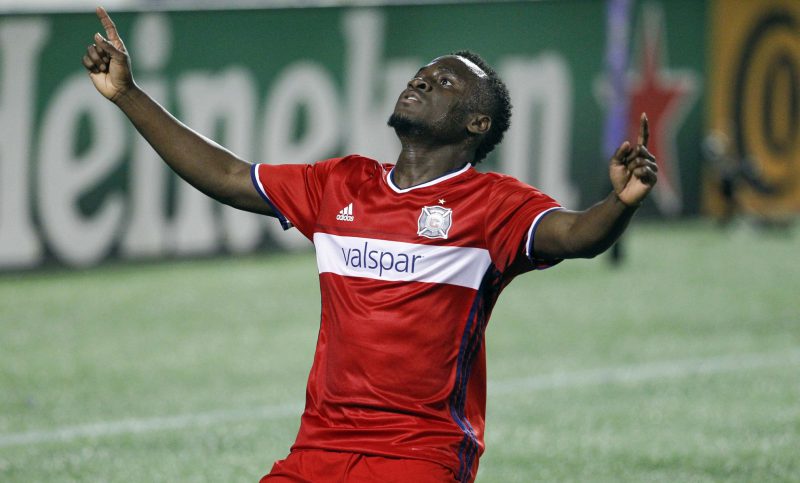 BRIDGEVIEW, Ill. – Whenever David Accam has been healthy, he has been the catalyst of the Chicago Fire attack, which has spent much of the year looking lost without him.

Accam led the attack once again on Tuesday, scoring twice in the first half hour to lead the Chicago Fire past Columbus Crew, 2-1, on Tuesday night at Toyota Park.

“For us we wanted to start the game early. We wanted them to be on the back foot,” Accam said. “That’s what we went out on the pitch to do and it paid off.”

Ethan Finlay recorded the lone goal for Columbus on a 79th-minute penalty kick.

The Crew have still never beat Chicago in the competition, losing all six meetings, including once in qualification and once in a final.

“We knew that, we addressed it and it was something we wanted to eradicate,” Crew head coach Gregg Berhalter said. “We wanted to get the first win. We wanted to be the first Crew team to beat Chicago Fire in the Open Cup. And we didn’t do it, we came up short. Give them credit, they defended well for a large part of the game and they scored at the right moments.”

Chicago advances to host the winner of Wednesday’s other “Central region” fifth-round match between Orlando City and the Fort Lauderdale Strikers. The Central quarterfinal is scheduled for July 20th at Toyota Park.

Despite sitting at the bottom of the MLS table, the four-time U.S. Open Cup winning Fire, are on to the quarterfinals for the fourth consecutive season, reaching the semifinals the past three years.

“The cup is really important for this club,” Accam said. “As a player every game is important, you want to win every game, and we approach every game with seriousness. For us every time we get a chance to play a game we try and win it and that’s the only approach we have.”

Accam opened the scoring seven minutes into the game, punctuating a Chicago counter attack with a quick snap of his right foot. Rodrigo Ramos started the break, playing to John Goossens who carried out of his own end and into the attacking third where he found Accam at the left edge of the 18-yard box. Accam was fronted by a couple defenders but found a yard of space as he tucked in and used it to fire a curling shot past Crew goalkeeper Brad Stuver.

“It’s really easy to work with him because if you have somebody with speed like that and he’s playing really well, every time you get the ball you just have to look for those guys and they will take care of it,” Goossens said.

Accam doubled the lead in the 29th minute and Ramos was once again involved. Nick LaBrocca chased down a ball in the right corner, held the play up and knocked it back to Ramos on the wing. The Brazilian right back placed a cross perfectly to Accam at the edge of the six where he finished on the volley to make it 2-0.

The Ghanaian, who exited in the 69th minute, now has seven goals in all competitions this season.

After losing from ahead last week against the Philadelphia Union, the Fire were determined not to let another victory slip away in the second half.

“I think we were aware that we had a very good result at halftime and that awareness and the lesson we got in the game against Philly, I can say that we learned a lot,” Fire head coach Veljko Paunovic said. “So we were able to use that experience in order to perform better today defensively and have a result in our favor.”

Pushing to get back into the match, the Crew brought on Wil Trapp and Ethan Finlay at halftime.

“We have the ability, we know that we can wear teams out,” Berhalter said. “I think Chicago got a little tired toward the end of the game. You just don’t want a 2-0 deficit to have to deal with. But the guys did a good job, the ones who came in.”

The Crew came close in the 56th minute when Christian Martinez managed to put the ball in the back of the net but was ruled offside after an initial Columbus shot had taken a deflection. In the 67th minute the Crew won a free kick at the top edge of the box but Justin Meram sent it over the bar.

Finlay drew one goal back when he earned a penalty in the 79th minute, ripping a shot that took a deflection off a Chicago hand in the box. Finlay converted low to the right to make it 2-1. Columbus pressed with a flurry of crosses in the final 10 minutes but couldn’t ever connect for an equalizer.

“I think we had momentum the whole game, the goals came clearly against the run of play,” Berhalter said. “Chicago defended for 90 minutes, you guys saw the game.

“But listen, there’s nothing wrong with that, it’s not a negative. They won the game, they’re in the next round, we’re not. I think in the first half, although we controlled the ball, we didn’t create enough chances, we didn’t put enough real pressure on them. In the second half that changed and we did. We got unlucky to have the one goal that was offsides but I think before could have potentially been a penalty kick with a hand ball, but that’s the breaks of the game. I’m proud of the way the guys kept battling and kept the pressure up because I thought that was pretty good.”

Chicago forward David Accam scored twice in the opening half hour to put the Fire out to a lead it would never relinquish.

In the seventh minute, Accam capped a Fire counter attack with quick shot from the edge of the 18-yard box, beating Brad Stuver with a curling effort for the early advantage.