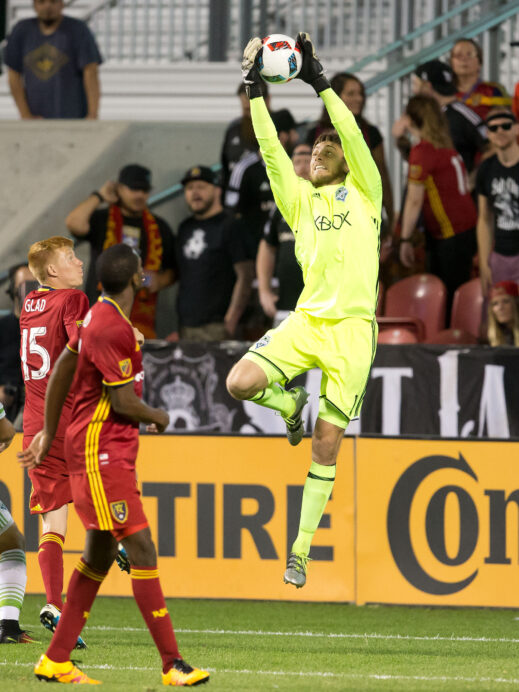 Just days after something resembling a historic nadir, the Seattle Sounders may have breathed more than a bit of life into their season. And they can thank a second-string, rookie goalkeeper for delivering a stunning performance in front of 17,087 at Rio Tinto Stadium on Tuesday night.

It was only a Round of 16 match in the U.S. Open Cup. But in league play the Sounders sit in ninth place in a 10-team conference and have lost five of their last six matches. They lost 2-0 at home to New York City FC on Saturday, a result that led captain Brad Evans to lash out at a creeping complacency. On Monday afternoon Sounders head coach Sigi Schmid admitted to an “air of gloom” surrounding his team.

Meanwhile, a suddenly resurgent Real Salt Lake side sits in third place in the Western Conference with an 8-5-3 record.

And yet in the heat (91 degrees at kickoff) and altitude of Sandy, Utah, a group of unheralded Sounders withstood an endless onslaught from a first-choice Real Salt Lake team. A makeshift lineup displayed a grit and resiliency the club has lacked for much of the season, and the Sounders somehow survived 120 minutes with a 1-1- tie before finally winning 4-1 on penalties.

Goalkeeper Tyler Miller, a backup to starter Stefan Frei in MLS matches, delivered eight often acrobatic saves in the run of play and denied RSL on two penalties. Perhaps more impressively, he held his nerve as countless shots skimmed the crossbar or scraped a post.

The Sounders advance to the quarterfinals, where they will face the winner of Wednesday’s match between the LA Galaxy and Portland Timbers. Seattle has hoisted the Open Cup trophy four times since joining MLS in 2009, and reached the final a fifth time, falling to Sporting KC on penalties in 2012 amid controversy.

The loss aside, Real Salt Lake will have to quickly regroup from an exhausting defeat before facing DC United (5-6-5, 20 points) on Friday.

Joao Plata staked the hosts to a 1-0 lead in the 43rd minute. The 24-year-old Ecuadorian easily converted from the spot after referee Alex Chilowicz whistled Tony Alfaro for taking down Yuri Movsisyan in the heart of the penalty area.

Salt Lake outshot the Sounders 30-16 on the night, but Designated Player Nelson Valdez equalized just six minutes into the second half. Attinella miscommunicated with a central defender at the top of the penalty area, and both Attinella and Valdez clattered to the turf as a through-ball popped loose. The Paraguayan striker was the first to rise, alertly poking the equalizer into an empty net.

Tyler Miller. The front office and coaching staff gushed to reporters about the 23-year-old rookie as far back as February. An injury to Frei then forced his debut in just the second match of the season — a 2-1 loss to to Real Salt Lake at Rio Tinto. Miller looked solid if understandably unsure of himself for most of that match, but Jamison Olave outleapt and outmuscled the rookie for the game-winning goal in the 86th minute. Much of the talk around Seattle in the ensuing days suggested Frei would have stopped Olave and delivered the Sounders a valuable road point. On Tuesday night, though, Miller let everyone know why the organization is so excited about his future.

Miller’s first save (on Plata) in the shootout. Momentum sometimes defines shootouts, and after putting the Sounders on their heels for much of the match, RSL seemed stunned to suddenly find the result in question.

The Real Salt Lake attack. Yes, Miller delivered again and again (and yet again). But how many close looks sailed just high or just wide? The Sounders mostly started reserves in goal, along the back line, and in central midfield. The match highlights will likely be keeping a few RSL players awake this week.