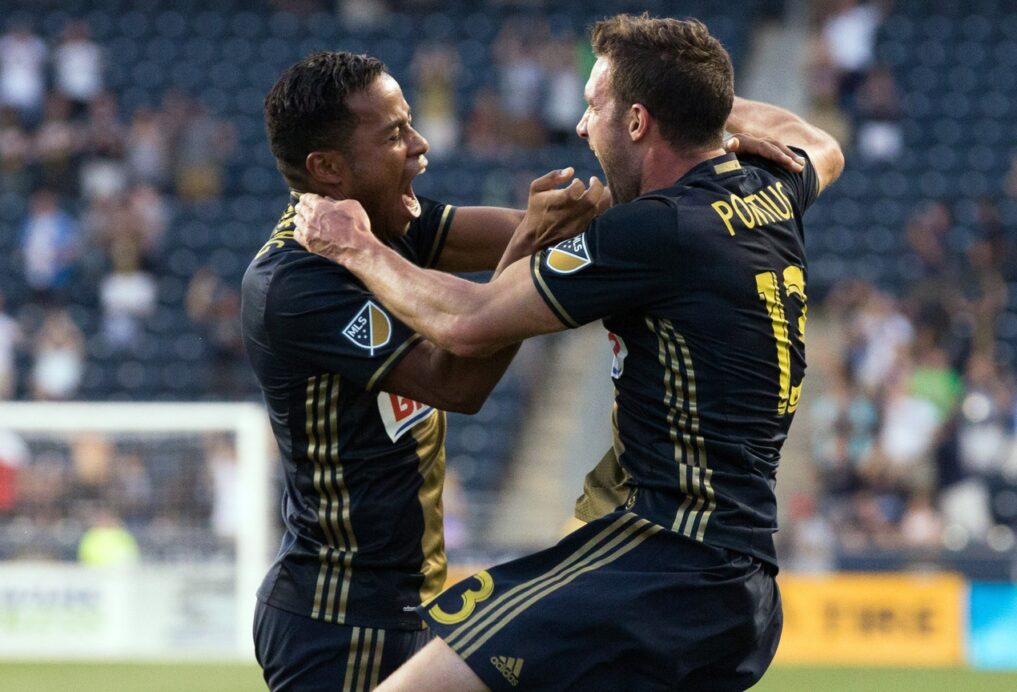 CHESTER, PA– The Philadelphia Union used a second half turnaround to advance to the U.S. Open Cup quarterfinals on Wednesday night by way of a 2-1 win over the New York Red Bulls.

Chris Pontius bagged a brace for the home side, who put together an impressive second half in the attacking end after posting just one shot on target in the first half.

Union netminder Andre Blake was forced into action early by the visitors as he made a pair of denials in the third minute. The first stop of the half for the Jamaica international came at the left post. That save produced a rebound that fell to Bradley Wright-Phillips. Luckily for Blake, Richie Marquez slid in to clear the danger.

Just after the Union cleared the first Red Bulls threat, Blake leaped back into the fray as he denied Dax McCarty’s effort from distance.

The Red Bulls finally benefited from their early spell of possession in the final third in the 17th minute, when Mike Grella knocked in the remnants of a free kick from the middle of the box. Grella picked up the ball after a poor clearance attempt by Marquez.

Blake kept the Union within striking distance for the rest of the first half as he kept out Grella’s effort from distance in the 35th minute and Wright-Phillips’ shot from close range right before the halftime whistle.

“We went down a goal and I just knew we were still in the game so I knew I just had to work harder to keep it at one,” Blake said. “I know that at some point we’ll get some chances. That’s the way it worked out tonight.”

The Union opened the second half on fire and were rewarded for their efforts in the 55th minute as Chris Pontius used a smart run through the middle of the pitch to latch onto Ilsinho’s through ball. Pontius took a slight turn to the right before finishing past Ryan Meara.

“The first goal, Ilsinho was able to pick up his head, he’s dribbling at the back line and I see he has some space, I see they’re playing pretty flatfooted so I made a run across, he plays me a great ball, at that point I know Meara is going to be coming out so I tried to chip it over him at the back post,” Pontius said. .

The same combination put the Union in the lead six minutes later as Ilsinho’s deflected cross from the right wing found the boot of  Pontius, who powered his second tally of the night into the back of the net.

“The second goal was pretty straight forward,” Pontius said. “I saw the space in front of me and made the run and Ilsinho puts it on my foot and I put it away.”

The attack was created on the counter by Tranquillo Barnetta, who out hustled Grella to reach the ball in his own half before he powered forward and fed Ilsinho.

“I think the big thing for us was starting to pick up second balls in the second half,” Pontius said. “In the first half, they won everything. Obviously we weren’t clean on the ball in the first half either so that didn’t help us I think just a little bit more fight in the second half and guys tucking in and helping out defensively started our offense for us.”

The Union were able to kill off the rest of the match with relative ease as the Red Bulls failed to threaten Blake on a consistent basis after the second goal. The biggest moment of the final 30 minutes came in the 80th minute, when Marquez intercepted Gonzalo Veron’s pass in the direction of Wright-Phillips with a sliding challenge.

Jim Curtin’s men will visit the New England Revolution in the quarterfinals.

Chris Pontius delivered a pair of timely goals for the Union, who pulled a complete 180 in terms of their attacking prowess in the second half.

Chris Pontius’ driving shot into the net in the 61st minute put the Union on course to advance to the final eight and keep the dream of reaching a third straight Open Cup final alive.

Bradley Wright-Phillips had a few chances to break through the Union defense, but on each occasion, he was unable to significantly test Blake. His best effort was a shot straight at Blake right before halftime.