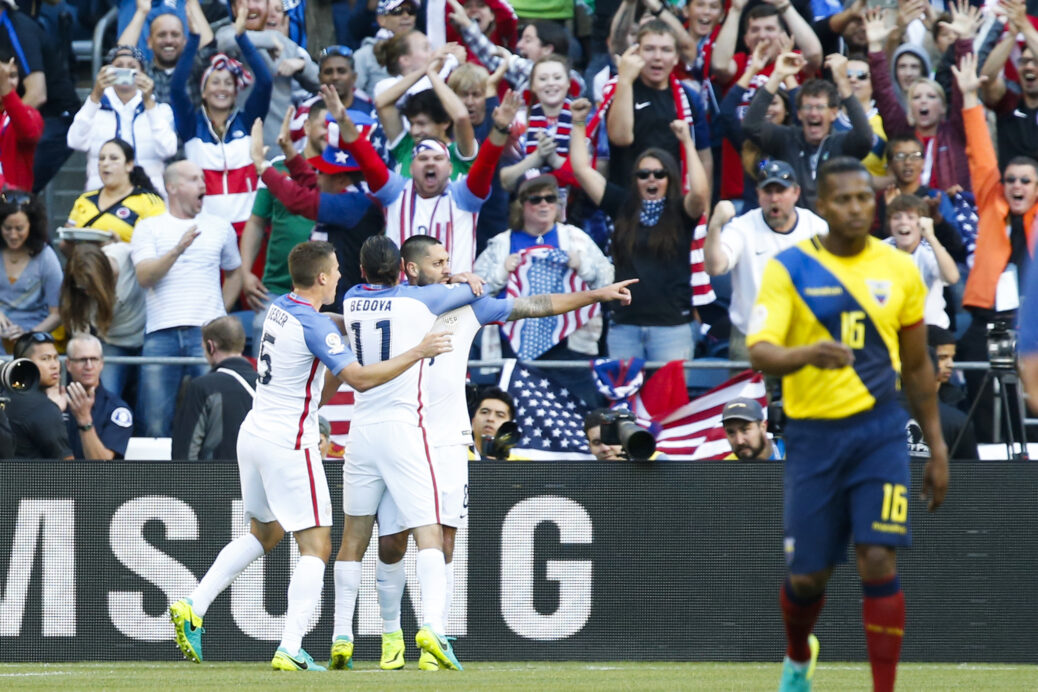 SEATTLE– For awhile, it looked like it would be an all night party. Clint Dempsey staked the United States Men’s National Team to an early lead, the U.S. attack looked as good as it has in recent memory, and the opponent did not seem remotely up for the magnitude of the moment.

But of course that would be far too easy. How could the USMNT finally reach the semifinals of a major tournament without frayed nerves? In the end, the U.S. held on for dear life for the final 25 minutes of Thursday night’s Copa America quarterfinal match against Ecuador, dodging bullet after bullet before escaping with a wild 2-1 victory in front 47,322 at raucous CenturyLink Field.

Dempsey scored early, and Gyasi Zardes added a second-half insurance goal that proved all-important. With both teams down to 10 men for almost the entire second half, Ecuador found one goal and nearly delivered a second on multiple occasions.

With the win, the Copa America Centenario is now an unqualified success for the USMNT as it has stormed back from a tournament-opening loss to Colombia. The U.S. now advances to the semifinals to play the winner of Saturday’s quarterfinal match between Argentina and Venezuela.

The win came at a hefty cost, however. Jermaine Jones, Bobby Wood, and Alejandro Bedoya are all suspended for the semifinal.

Dempsey opened the scoring in the 22nd minute, rising between central defenders to powerfully head a one-touch cross from Jones into the upper right corner. It was his third goal of the tournament and his 52nd career international goal, leaving him just five short of all-time USMNT scoring leader Landon Donovan.

Zardes, who put in a stellar shift along the right touchline using pace and energy to keep Ecuador honest, added the second goal in the 62nd minute, scooting behind the defense to escort a close-range shot from Dempsey across the line.

Michael Arroyo pulled a goal back for Ecuador in the 72nd minute, ripping a one-touch shot past goalkeeper Brad Guzan. The tenor of the match turned after the goal, as Ecuador began to look like its most lethal self and the USMNT struggled to track runs into the penalty area. Multiple Ecuadoran headers narrowly missed equalizing.

John Brooks, so stout throughout the tournament, nearly scored an own goal in stoppage time, clearing a ball out of bounds and just past the left post.

Both teams were dropped to 10 men in a bizarre sequence in the 52nd minute. Ecuador’s Antonio Valencia tripped Bedoya to earn his second yellow card of the match. As tempers flared along the sidelines, referee Wilmer Roldan issued a straight red card to Jones for putting a hand to the face of an opponent. Both players are vital parts of their teams, but the extra space on the pitch clearly paid dividends for Ecuador as it sought to equalize.

Dempsey nearly doubled the lead less than five minutes after his goal, ripping a left-footed shot from 10 yards out that never got quite far enough from Dominguez. The USMNT looked likely to add another goal throughout the first half, but never could find the back of the net. Bedoya came up short on the clearest chance, getting a clean look on a 3-on-2 break but failing to challenge Dominguez from 10 yards out.

Speedy forward Enner Valencia had the best chance of the half for Ecuador, but Guzan dropped to smother the West Ham United forward’s close-range shot from the end line. An unseemly midfield turnover from USMNT captain Michael Bradley led to the scoring chance.

The match opened with obvious nervousness from each side, but by the 15th minute more of the game was going to the USMNT, with the Ecuadoran defense repeatedly on its heels, scrambling to mark Dempsey, Wood, and Zardes as they streaked into the penalty area. Wood earned the most tantalizing early opportunity, toeing an agonizingly slow-rolling shot past Dominguez and just past the right post.