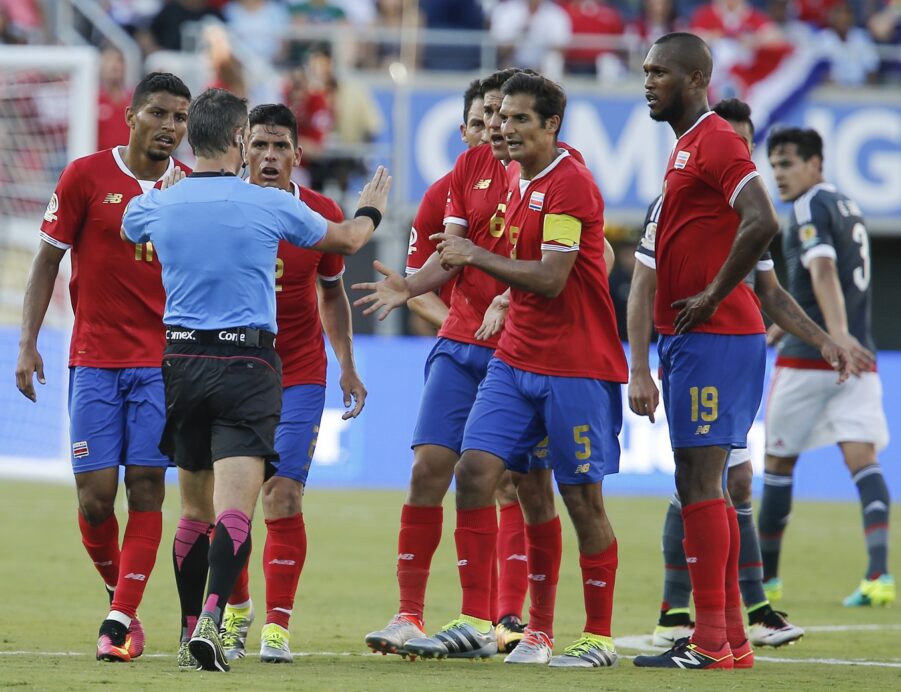 ORLANDO – Nobody could blame the Costa Rican fans for feeling frustrated after an unexpected scoreless draw with the lowest ranked team in their group on Saturday, but Kendall Waston says the Ticos were not surprised by the way it played out.

The towering center back, who was sent off for a scissor kick challenge on Nelson Valdez in stoppage time, said the team was prepared for the Paraguay’s game plan from the start. While viewers may have been shocked from the pressure the South American side put on the darlings of the 2014 World Cup, Waston didn’t concur.

“We knew that they were going to play the way they played us today,” Waston told SBI. “They like to have four midfielders play tight, looking to have that space really narrow, and we knew they were going to be very dangerous up front.”

And dangerous they were, coming out strong with five shots in the first half. Paraguayan midfielders Derlis Gonzalez and Oscar Romero found tons of space and attacking chances as their back line pressed aggressively high, but the final ball was lacking. Waston asserted that it was always Coach Oscar Ramirez’s plan to counter by building from the defense, though.

“[We] tried to have the ball slowly through the back, because if we pressure and try to rush the game, in the second half we weren’t going to have legs,” Waston told SBI. “So we played smart with all those factors we had.”

Whether or not Costa Rica were ready for the Paraguayan’s style of fluid passing through the center of the field, frustration seemed to be mounting in Waston’s team as they failed to find the back of the net. The Vancouver Whitecaps defender lost his composure deep into stoppage time, and will now miss an all-important match against the USMNT on Tuesday as a result.

“[I] really feel bad, its always awful to have a red card, and now the only thing is I have to support my teammates,” Waston told SBI. “They support me in this difficult situation and now we just have to look forward to the next game. We will try our best because we know that this doesn’t end here.”

There was some positives for Costa Rica late in the match, especially after Waston’s club teammate Christian Bolanos entered. The Ticos recovered form a poor start to really insert themselves after halftime, putting some quality attacking sequences together and getting more time on the ball after the hour mark. But Paraguay was able to hold it together, and the resulting 0-0 result is not ideal for either team heading into their second match.

“Yeah, we know the next game is going to be the most important,” said Waston. “We know that the U.S. came from a defeat, so they’re going to push us and try to win. We’re obviously going to do the same because we need to win to qualify for the next round. So I think its going to be a tough game, a very interesting game, and hopefully Costa Rica can win.”