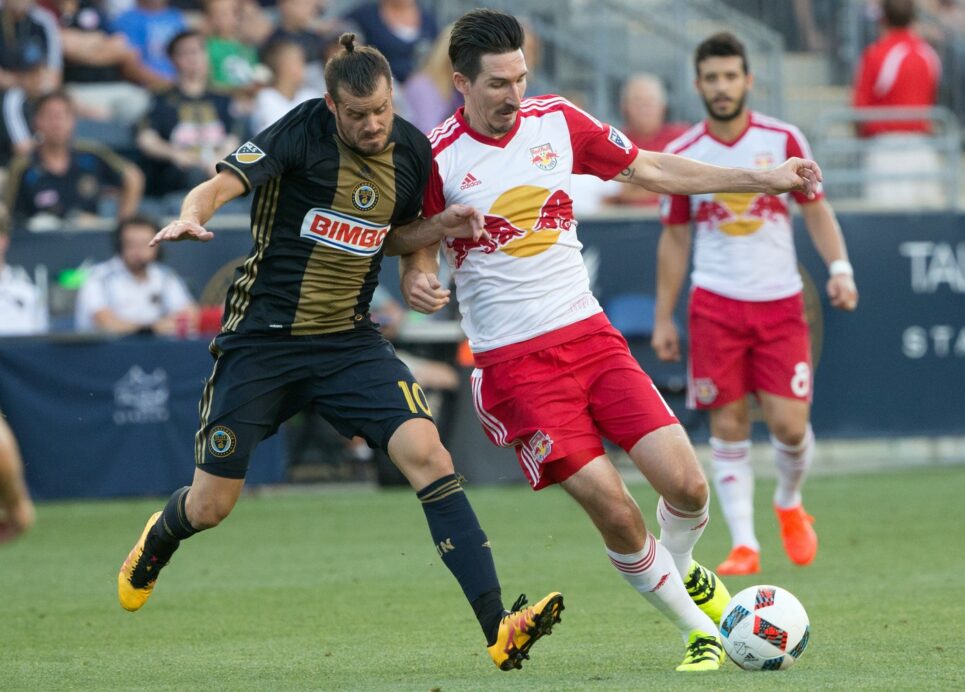 CHESTER, PA– The Philadelphia Union and New York Red Bulls played to a 2-2 draw on Sunday in a match that took more twists and turns than a rollercoaster.

The Red Bulls scored twice in the first half to take control of the match, but the Union used a pair of tallies in quick succession to level the Eastern Conference match at two goals apiece.

Sacha Kljestan notched his first of two tallies of the Eastern Conference clash of rivals in the 27th minute as he slid a shot from left to right into the bottom right part of the net occupied by Andre Blake.

The 2016 MLS All-Star bagged a brace before halftime on a free kick in the 44th minute. Kljestan’s set piece took a deflection off the noggin of Tranquillo Barnetta on its way to the right side of the net. Blake was caught flatfooted in defense of the kick because of the deflection.

The Union pounced back into the game in dramatic fashion with two goals in a span of two minutes in front of their supporters in the River End.

Jim Curtin’s men received a penalty in the 66th minute as Sal Zizzo knocked down Chris Pontius in the box as the Union midfielder attempted to link up with Keegan Rosenberry’s cross from the right wing.

C.J. Sapong stepped to the spot and scored his first-career goal from the spot in the 67th minute to send the crowd in Chester into a frenzy.

The Union struck for a second tally immediately as Pontius hooked up with Fabian Herbers’ pass from the right wing. sent the shot from open space into the left side of the net.

Just as the Union appeared to gain control of all the momentum, Ilsinho was handed a straight red card for an elbow to the face of Connor Lade.

The Red Bulls used a pair of key stops to keep the game level at two goals apiece right after the red card. Lade stopped Pontius’ header on the line in the 74th minute, while Luis Robles stopped Tranquillo Barnetta four minutes later.

Robles jumped back into action in the 82nd minute as he used a full stretch to stop Barnetta once again.

Mike Grella almost pulled the visitors ahead in the 89th minute, but his shot from just outside the box swerved wide to the right.

The Union return to league action on Saturday in Montreal after a U.S. Open Cup match with New England on Wednesday. The Red Bulls host NYCFC on Sunday at Red Bull Arena in the final New York derby of the regular season.

Robles was immense during the final 20 minutes of the second half as he produced a few big saves to keep the game level at two.

The penalty changed the complexion of the contest. Sapong’s spot kick handed the Union plenty of momentum to chase an equalizer and a win and it put the Red Bulls on the back foot.

Ken Tribbett committed plenty of turnovers during the awful first half performance put in by the Union. He improved a bit in the second half, but the first 45 minutes cost the Union three points.