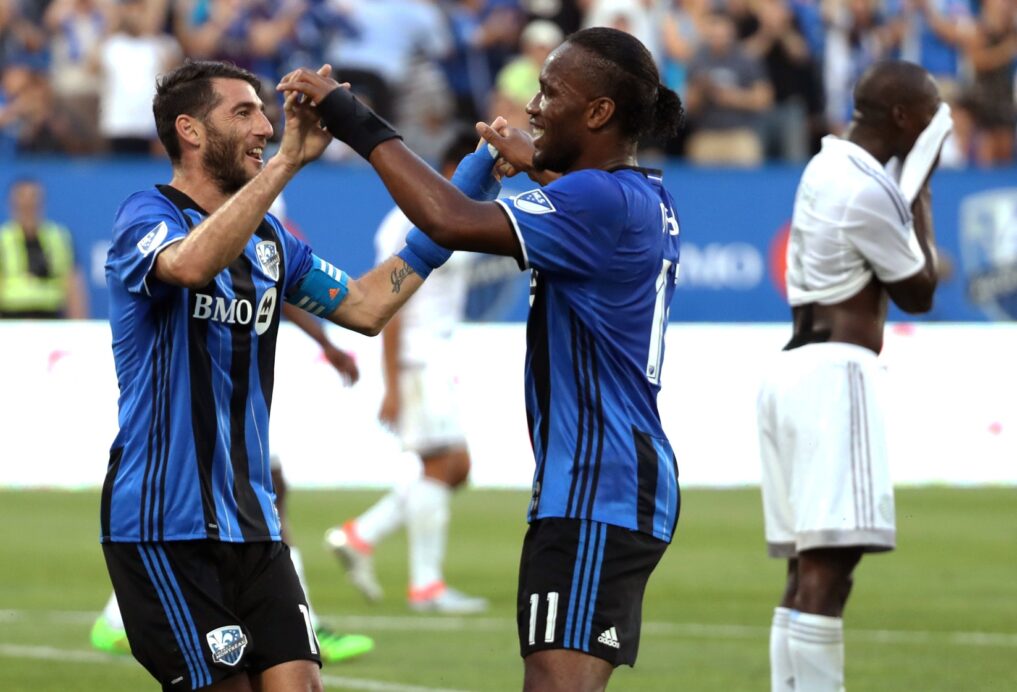 Didier Drogba produced a master class performance at the forward position in the Montreal Impact’s 5-1 win over the Philadelphia Union at Stade Saputo on Saturday night.

Drogba shredded the meager Union defense to pieces on three occasions as the Impact bounced back from a home defeat at the hands of New York City FC six days ago.

The hosts pulled ahead through Drogba in the 19th minute. The Ivorian forward finished off a tremendous team move started by Ambroise Oyongo and Ignacio Piatti on the left wing. Oyongo played a give-and-go with Piatti, who delivered a clever back-heel pass over to the left back whose cross found a cutting Drogba in the middle of the penalty area.

The Impact almost found a straight path to goal through the left wing once again in the 37th minute, but Keegan Rosenberry slid in to make a phenomenal 1-on-1 challenge against Ignacio Piatti in the penalty area.

In the 42nd minute, Drogba followed up a terrific save by Andre Blake on Piatti with a shot into the back of the net from wide open space in the center of the penalty area.

The brace was the first of the 2016 campaign for the 38-year-old who earns a total of four multiple-goal matches in MLS since joining last summer.

Drogba completed his hat trick seven minutes into the second half as he split Richie Marquez and Ray Gaddis on the way to latching onto Piatti’s through ball. The finish from the former Chelsea legend rolled into the left side of the net past a frustrated Blake.

Chris Pontius pulled a goal back for the Union in the 72nd minute as he lofted a header into the right side of the net off a Walter Restrepo cross from the left wing.

Piatti and new acquisition Matteo Mancuso delivered the final knockout blows to the Union in the final few minutes of the second half. Piatti scored his 12th of the season in the 87th minute and Mancuso netted his first goal in an Impact shirt in the 91st minute.

The Impact return to action on Sunday at RFK Stadium against D.C. United, while the Union host Real Salt Lake on the same night.

Didier Drogba ran circles around the Union back line on each of his three tallies on Saturday.

Drogba’s first strike of the contest came on a brilliant team move started by Oyongo and Piatti. The move set the tone for what would be an easy night in the final third for the Impact.

Ray Gaddis was turned around by the movement of Drogba on countless occasions. The full back, who has been relegated to the bench this season, showed why he’s dropped on the depth chart in 2016.